When Autumn leaves start to fall

September 25, 2015 -- Chefs can be shy.  The softspoken “server” on Wednesday evening at L’Epopée gave me cause for concern; he was so reserved that he was barely projecting well enough to communicate with his guests.  I worried about his chance of succeeding as a server.

At the end of the evening, when I was telling him what was so good about the sauces in this dinner, he beamed and said, “I am the chef.  I have come up tonight to see how this part of the house is working.”

So the young man whom I had seen appearing out of the kitchen at L’Epopée must be the sous chef, and he must be good enough that the chef was comfortable with leaving the kitchen mostly to him on Wednesday evening.  I’m sure that by then, many of the preparations had already been made.

The starter course that we shared was made in one of those earthenware escargot baking dishes with a dozen round concave indentations.  Instead of escargot, a small shrimp was in each indentation, and the entire dish was covered with a rich, creamy, velvety tomato sauce that had just the right amount of seasonings, tasting mildly Spanish.  The shrimp were tender and juicy; not the least bit overcooked (photo below). 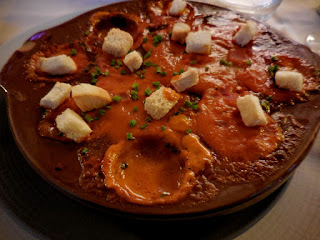 We each had roasted duck breast and polenta, served in a small puddle of fruity sauce.  Comfort food doesn’t get any more comforting than this.

We shared a dessert of profiteroles with that rich, dark chocolate sauce.  Then it was time to say goodbye to L’Epopée for this season.  This was where we began our summer dining in Paris this year; we’ll miss it.

Last night, we dined at another longtime favorite, Le Café du Commerce.  We each ordered a starter and main course, and thought we’d skip the dessert.  Tom had six good escargots, and I had the delicious terrine lapereau (young rabbit – aka bunny – terrine) topped with a confiture of prune.

Tom’s main course was a huge ravioli filled with duck confit and a little orange sauce.  He said the concoction was like a big shredded duck turnover – juicy, meaty, and really good.  Mine was skate (aile de raie) served with capers and butter.  I asked for puréed potatoes instead of steamed potatoes.  “No problem,” said the server.  This wing of skate was the largest I’ve seen yet.

I just do not understand why skate is so rarely served in south Florida.  It should be on the menu all the time, because it is prevalent in the Gulf waters.  Do Americans not understand how good skate is?

We didn’t skip dessert after all; instead, we shared a classic and good crème brûlée.

When it was time to go, each server and host that we passed said thanks and good evening.  When we exited, the streets were cool and wet; we just missed a rain shower.

Earlier in the day, we had a good long walk on the Allée des Cygnes and in the neighborhood around us.  The Allée’s trees were looking autumnal; the line at the Eric Kayser bakery was almost long; the neighborhood is hopping with activity on the streets.

We’ve been enjoying the fall weather, but now we’re ready for Florida again.  Time to start packing!  Work is being done on our house, and we’re anxious to see it.  (Thank you for the permit, Sanibel.) We’re so fortunate to have our good friend Matty overseeing the place right now.

Thoughts are turning toward home, and you will soon be able to follow my musings in my Sanibel Journal again.
Posted by Barbara Joy Cooley at 1:32 AM