Imagine that, in Paris

September 8, 2015 – To be able to stay through the month of September in this apartment in the 15th arrondissement is a blessing, for many reasons.  The sunlight that floods the double living-room as the sun sits lower in the sky, the coolness of the air sifting through the slightly open windows, the re-opening of some favorite neighborhood spots, following weeks of vacation closings  -- these are some of my favorite things about September here. 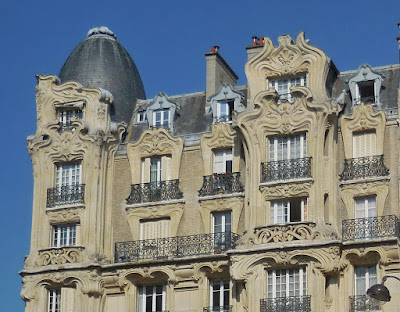 And now, we can add Maria to the list.  Maria normally cleans this apartment every Monday, ten months out of the year.  But she goes home to Portugal for the months of July and August, so we’d never met her.  Now she’s back, and we’re still here.  We met her for the first time when she arrived at the door late yesterday morning.

After our cheerful meeting, we left 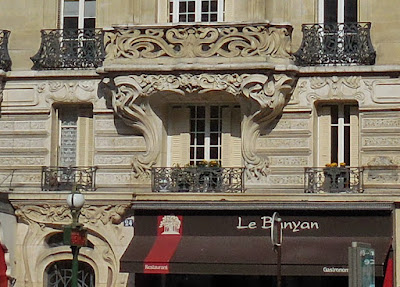 Maria the cleaner to her work.  We went for a walk.


Tom needed more coffee, so we decided to check out the brasserie called Les Trois Garcons on the Place du Comtat Venaissin, near the park behind the Saint John the Baptist of Grenelle church.  For us, the weather was a bit too chilly for sitting outside for coffee, so the server motioned for us to sit either at the bar or on a cozy weathered-leather loveseat sitting by an equally weathered leather chair and coffee table in a front corner window.

We chose the loveseat.  I ordered Marco Polo tea, and Tom had an espresso. We talked and watched the server make his preparations for the lunch crowd, which would begin to arrive in about an hour.  We admired all the old wood paneling, the zinc bar, the ceramic mosaic tiled floor, and the old-fashioned, simple bentwood brasserie chairs.   The tables were the classic bistro squares, with heavy, black, ornate cast iron pedestals. 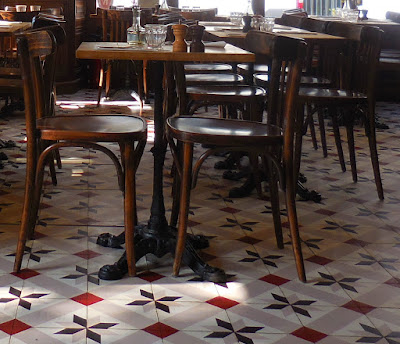 The music on the sound system was funky rhythm and blues – American, of course.  We felt at home.  I noticed, on one of the blackboards stashed behind the leather armchair next to me, that aile de raie is on the menu at the Trois Garcons.  We’ll have to dine there sometime so I can check that out.

Yesterday, we were captivated by a modern single-family house that has been constructed on a small lot at the corner of the rue de l’Eglise and the impasse de l’Eglise.

It is brick, with a slate mansard and some large windows.  It is built in a lean-to style right up against an older and taller apartment building on the rue de l’Eglise.  On the impasse side, the house has a small walled-in garden shaded by a couple of trees.

I could imagine a Parisian who was absolutely frustrated and fed up with syndic boards (like coop boards or condo associations) but who was also determined to live in central Paris, who desperately searched and searched for a small lot in a residential area with all the amenities that Parisians require – I could imagine that Parisian finally finding this spot, hiring the architect, and pressing through all the hassles of building with steely determination.  And finally, I can imagine that Parisian’s joy at this final product, this inviting home of one’s own. 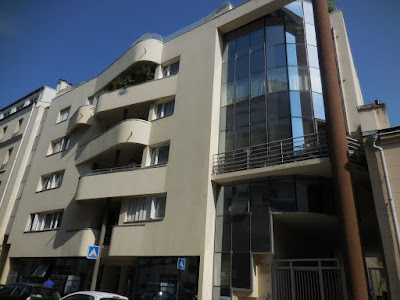 A little farther down the street we saw another modern building, this one several stories high, with a sleek modern façade and overlapping, alternating, undulating balconies.  One corner of the building was wrapped by floor-to-ceiling windows.  I could imagine that this was a location of one of the many former factories in the 15th arrondissement – one of many that were demolished to make way for apartment buildings from the 1920s to the present.

At the rue Saint Charles and the rue
de l’Eglise we encountered a sizable bakery that was obviously far better than average.  I could tell by the people lined up inside, intently waiting to purchase their carbs.  I could also tell by the gorgeous creations on display in its front window, on the rue Saint Charles side.  And I could tell by the brilliant blue paint and sparkling windows forming its façade.  This must be one of that neighborhood’s important landmarks. 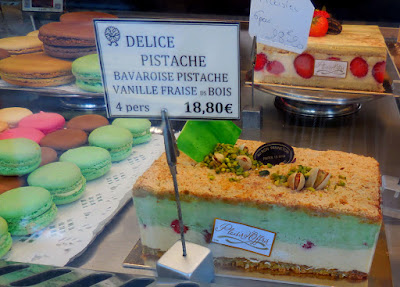 We turned up the rue Saint Charles, passing by the sprawling Zola Color hardware and housewares store, and continued on to Beaugrenelle.  Tom was ready for lunch, and we wanted to try Eclectic again.  It is an ultra-modern brasserie facing the riverfront at Beaugrenelle on the rue Linois.

Soon we had a table near the window, with a view of the terrace and riverfront and brilliant blue sky.  Funky American music played on the sound sytem.  The server showed us the prix fixe menu, which would 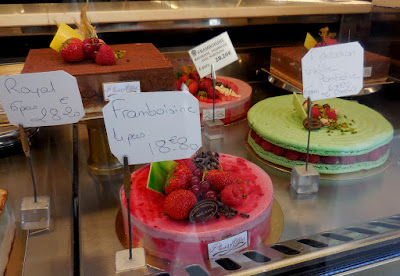 have been tempting if that were to be our main meal of the day, but we had plans for La Table d’Hubert in the evening.

So Tom selected crab spring roll, and I chose a croque madame at Eclectic.  The server asked me if I wanted fries or a salad with my croque. I really didn’t want either, but since he implied that this came with the croque, I asked Tom if he wanted fries.  He certainly did – I could tell by the expression of craving on his face.  So I said, “frites, s’il vous plait.”


What a good choice that was.  The fries were superb – cooked in truffle oil, thin, hot and crispy on the outside.  Oooh la la.

The croque was impressive, too.  Instead of being made with ordinary bread, it was almost like a pastry, pressed together with the ham and cheese in the middle and a fried egg on top.  Tom’s spring rolls were a little less impressive, but at that point, we didn’t care.  Lunch was good, and scenic.
When we’d finished, we thought it was time to return to the 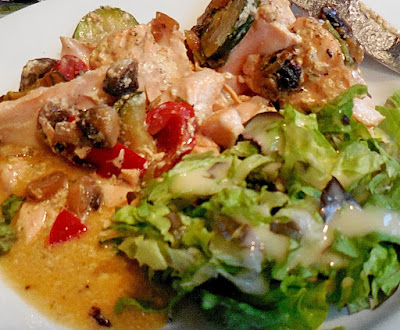 apartment.  Maria would have completed her work and be gone.  We look forward to her next visit, next Monday.

In the evening, we had that nice half-hour walk down to La Table d’Hubert along the leafy avenue Felix Faure.  After we were seated at our usual table in the front window, I noticed that a movie crew was working across the street.  Red-and-white plastic tape blocked off a number of parking and delivery spaces in front of and near the Mozart bakery across the street.  A little later, more tape was stretched out to block the parking and delivery spaces in front of La Table 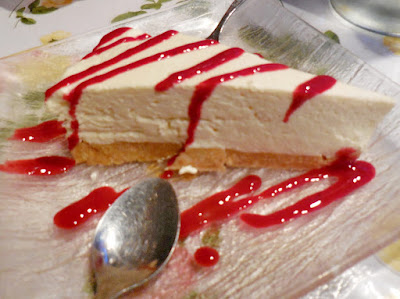 d’Hubert.    We have no idea what is being filmed and we don’t care because we see this sort of thing so often.  But I can imagine that it irritates some in the neighborhood, to lose those parking spaces.

Dinner began with Hubert bringing us complimentary kir and homemade cheese/charcuterie crisps/biscuits.  We followed this with a shared starter of charcuterie and homemade fig preserves.  Hubert’s charcuterie is high-quality stuff, and the preserves were delicious. 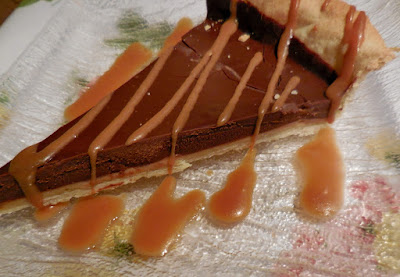 We each ordered the plat du jour, called salmon en papillote, but I would have called it an aumoniere.  Details.  The aumoniere was made of aluminum foil, and with a bit more work, could have been formed into one of those aluminum foil swans that some fancy U.S. restaurants know how to make for holding your leftovers.
We imagined teaching a class in leftover containers to Parisian restaurant proprietors.  We’d start by having them each make an aluminum foil swan, just to break the ice.

While we waited for the main course, we watched Hubert debone another dorade royale for another older lady, just as we’d done last week.  We listened to a diverse group of six people from heaven-knows-where, who were chatting non-stop in non-native English at a table near us.  We once again enjoyed the fine American jazz that Hubert plays on the restaurant’s sound system.

Dinner arrived at the table.  The salmon and vegetables in the aumoniere were hot and steamy, and were bathed in a flavorful herb-and-butter sauce.  The green salad was a strange garniture for this dish – rice would have made more sense.  But the aumoniere was so wonderful that I didn’t give the garniture much thought.

Hubert got confused and brought us the wrong dessert – a white chocolate tarte, when we’d ordered a chocolate-and-caramel tart.  He realized his error and then insisted that we have both – one on the house.

We could hardly believe the bill when it arrived.  With the Lafourchette discount, the total was only 22.50 for this dinner for two!  And it was delicious, through and through.  Imagine that, in Paris.
Posted by Barbara Joy Cooley at 2:47 AM

Mon dieux, €22.50 for that dinner! And here's to more déjeuners while Maria is cleaning! Fun to see you really digging into the 15th, especially with this extra month. Au Trois Garçons would be my regular hangout!