Back in Little Teheran Again

September 9, 2015 – Last Friday evening, we invited our friends Ron and Elisabeth from the 6th arrondissement and Jim and Maddy from Sanibel (who are staying in the 6th arrondissement) over to our place for a glass of champagne, then the six of us walked around the corner to dine at Le Café Du Commerce.  The conversation was lively and we had a good time.  The four of them had arrived together in a taxi, and they left together in an Uber car.  Their Uber experience was a good one, and the cost was less than half the taxi fare.

The metro would have been even less, but for anyone with mobility issues, it is nearly impossible.  The metro involves taking lots of stairs and walking some distance.

Jim and Maddy had lived in Iran for a few years in the 1970s just before the revolution because Jim was employed by a big accounting firm that sent him there.  The experience of living there was good for them, but the experience of having to leave under the circumstances at the time was harrowing.

They were interested in what I’d written about “Little Teheran” here in the 15th , so I let them know that after our positive experience of dining at Guylas on the rue des Entrepreneurs, I’d made a Lafourchette.com reservation for Perchiana, on the rue Mademoiselle, last night.  They decided that they’d like to join us, so they made a Lafourchette.com reservation, too.

Perchiana was very small, so much so that we said “bonsoir” to others who entered.  This included a couple of mature men who sat in a corner nearby, and a young man who sat at a table right next to Tom and me.

Inevitably, at the end of the dinner, we all were involved in a conversation.  The two mature men – one middle aged, one older – were originally from Teheran, and the young man’s parents were from there as well.  The young man mostly listened, interjecting comments only a couple times as he ate his dinner and charged his cell phone.

The mature men, however, really wanted to talk – especially when they realized Jim and Maddy had lived in Iran.  We spoke in French and sometimes in English.  Most of the exchange was between Jim and the middle-aged man who, I believe, said he had a family in the U.S. and had received his Ph.D. in the U.S.  Both of the men had been professors; the older one had been at the university in Teheran. 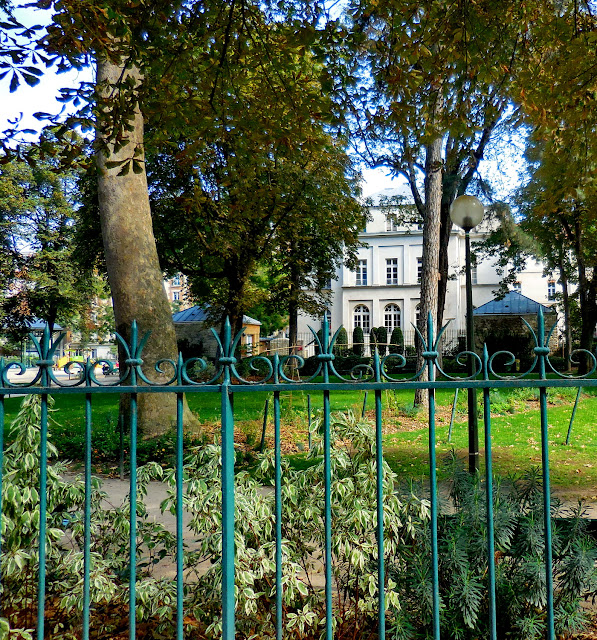 At some point well into our conversation, the middle-aged Iranian man was very complimentary of the Obama administration’s negotiation of the nuclear deal with Iran.  Tom and I said, “Thank you!” quite emphatically to the man, and then we both turned immediately to Jim and said, “Sorry Jim.”  If we hadn’t done that, I think the Iranian men would have assumed we all supported President Obama on this issue, when in reality only half of us did (just like the U.S. voting population).

The men repeatedly said that there is a lot of pro-American sentiment in Iran; several times they jokingly referred to Iran as the 53rd state of the U.S.  (I guess 51 and 52 must be Puerto Rico and the U.S. Virgin Islands?)

The food we were served was good, but the starter courses were awkwardly served with no rice;  both of them were sauces.  On the main plates, the grilled brochettes were very similar to what we’d had at Guylas.  We should have asked for all the dishes to be brought to the table all together.  Jim said the separate starter-main course arrangement just doesn’t make sense with Persian food.

At the end of that fascinating dinner, we all said goodbye to each other, and Tom and I walked with Jim and Maddy to the bus stop nearby.  They had arrived by bus, as well; they’d discovered that the number 70 bus goes right from the Place Saint Sulpice in the 6th  to the street in front of Perchiana in the 15th.  How convenient!

Now that was a bonne soirrée!
Posted by Barbara Joy Cooley at 3:00 AM