A visit to Little Teheran

September 4, 2015 -- Paris has a small but noticeable population of people who originated in Iran.  The first big wave of these Persian immigrants occurred in the early 20th century.  These generally were students whose way was paid by the Persian government.  In the 1930s, the Persian government established a competitive exam to decide who would receive these scholarships.  The students were required to live in dormitories, in part so that they could be watched by agents from the Iranian Embassy.  Students, as we all know, can be rebellious.


The Pahlavi government was overthrown, and after the 1979 revolution in Iran, one of these Iranians formerly educated in France became that country’s new prime minister.  His name was Mehdi Bazargan (1908-1995).

Bazargan had studied engineering at the grand École Central des Arts et Manufactures in Paris.  After his studies, he served in the French army, fighting against Nazi Germany.  Then he returned to Teheran to head up the first engineering department at the university there.  Later, he was the first Iranian to run the National Iranian Oil Company.

Politically, he was a co-founder of the Liberation Movement in Iran in the early 1960s.  He professed to accept Shah Mohammad Reza Pahlavi as the head of state; nevertheless, he was a political prisoner from time to time, under the Pahlavi government.  His house was firebombed in 1978, during the Pahlavi reign. 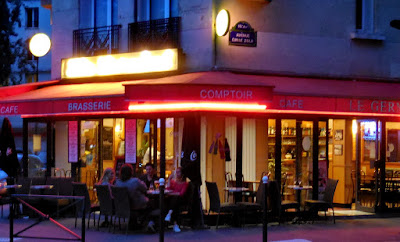 After Bazargan was appointed Prime Minister of Iran, he was one of the more democratic and liberal leaders of the revolutionary government, and so he clashed with the more extremist religious leaders.  His term as prime minister didn’t last long.  He resigned in November 1979 after the takeover of the U.S. Embassy and the hostage-taking.  His resignation was a protest against the hostage taking, and an admission that the Iranian government was unable to free the hostages.

Still, Bazargan continued a career in Iranian politics, although he became increasingly frustrated.  He tried to run for president in 1985, but the so-called “Council of Guardians” refused to allow it.

Among Muslim scholars, Bazargan is respected.  He is known for his work in human thermodynamics.  In prison, he wrote Love and Worship:  Human Thermodynamics, published in 1956.  According to Wikipedia, in this book he attempts “to show that religion and worship are a byproduct of evolution, as explained in English naturalist Charles Darwin's 1859 Origin of Species, and that the true laws of society are based on the laws of thermodynamics.”

Later in life, Bazargan developed a heart problem.  He was on his way to the United States for heart surgery when he collapsed in an airport in Switzerland.  He died there in January 1995.

We never knew anyone from Iran who was like Bazargan, but we did know Reza, the Iranian plumber whose shop was just a quarter block away from us on the rue du Theatre.  I think Reza would have been at least ten years younger than Bazargan, and Reza, too, was imprisoned for political reasons during the Pahlavi years.  We always suspected that Reza was much more than a plumber when he was in Iran; he may have been one of those Iranian students who, like Bazargan, was trained as an engineer in Paris.

Reza and his two gorgeous Persian cats retired and moved away from the neighborhood a few years ago.  We miss seeing him and the cats in the shop window as we pass by, on the way to the grocery.  Reza liked Tom and considered him to be, like Reza himself, a stylish and cool guy – just because he wore a blazer to dinner in the evening.  I think Reza also liked the way we listened to him, and accepted his advice without question – on plumbing matters.

Reza never did seem to hang out at the Iranian restaurants and shops in the area.  We did, however, frequently see him drinking on the terrace of Lola, a brasserie on the avenue Emile Zola and the rue du Theatre.

A week ago, as we sat at a table by the window at Stephane Martin’s restaurant on the rue des Entrepreneurs, I took notice of a Persian restaurant across the street.  Its sharp, new black awning had crisp cursive lettering in shiny metallic gold, announcing the name of the establishment:  Guylas.  I saw a number of people entering the place, including a few in traditional Persian garb (headscarves, but no niqabs, burkas, or veils).  The windows were sparkling clean, and revealed interesting dark-blue or purple upholstery within.  I made a mental note to check it out when I was at my computer.

We’ve noticed, through the years, that there is a cluster of Persian businesses in that pocket of the neighborhood, mostly on the rue des Entrepreneurs, but also including a few scattered places only a block or two away – such as a new Persian place on the avenue Emile Zola that is trying to look like a member of the Relais de l’Entrecote steakhouse chain.

When we walk by the pseudo-Relais de l’Entrecote resto (named the Relais du Quinzieme) in the evenings, the place looks fairly deserted – not too promising.  But this other new place, Guylas, looks promising.

I checked Yelp, Facebook, Google, and TripAdvisor.  The reviews for Guylas are quite good. Several reviewers claim that Guylas is the best Iranian restaurant in Paris.

The food descriptions were interesting – grilled meats, special rice, special sauces, and rose and pistachio flavored ice cream.  Since it is a sizable restaurant and since we dine a little early by Parisian standards, I thought we could risk going there without a reservation.  Last night was the first night for which we had no reservations.

So after a long day of work at the computers, with one outing in the afternoon for groceries, bakery bread, and a few other odd items, we walked down the busy rue du Commerce, skirting the park at the Place du Commerce, and taking a shortcut through a particularly attractive 1930’s cluster of apartment buildings, to then cross the rue des Entrepreneurs and enter Guylas.

The music played on the restaurant’s sound system was traditional Persian fare, and that was good, except we wished it had been more instrumental and less vocal. 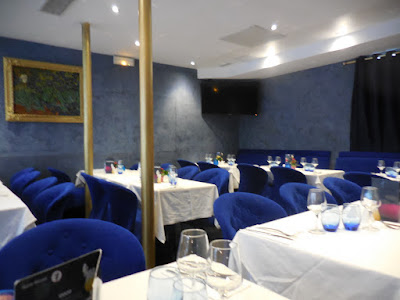 The server, a very competent young Persian woman, seated us at the far end of the restaurant, away from the chilly drafts of the front door.  I was comfortable on the plush blue-velvet banquette, and Tom was seated in one of the substantial blue velvet-upholstered chairs.  The sponge-painted deep blue walls boasted only a few, well-chosen paintings.

We selected the assortment of brochettes for two people, so that we could sample a variety of the grilled meats.  What arrived at the table was a platter of offerings that would have easily served a family of four.  Thank goodness Tom had a ZipLoc bag in his pocket.

The dinner was fine – all high-quality ingredients served in a refined and comfortable ambiance.  The desserts included that special rose and pistachio ice cream, as well as a slice of delicate, multi-layered cake.

We enjoyed chatting with the server at the end of our visit.   We talked about the various products that Iran is known for – including tea and carpets.  We confessed that we especially like the carpets.  She said she is from Teheran, and that she has worked as a carpet weaver.  Tom said he thought it might be very tranquil, satisfying work.  She said it was, but that it was hard – her shoulders and back would ache at the end of the day, and the lint dust gave her a persistent cough.  She must have worked for one of the large, urban operations – which is where some of the most refined rugs are made.

We left the restaurant, and the neighborhood known as “Little Teheran” (Petit Téhéran), and made the short walk home.  In case you want to visit Little Teheran, here’s a list of addresses:

On the web site Iran Beyond the News , the proprietor of Mazeh, Mr. Tavassoli, is reported to have said that he selected the 15th arrondissement for his restaurant because “He followed the Iranian community who had settled in the high towers of the Beaugrenelle district [known as the Front de Seine]. Iranians had bought estates there with the money from the oil shock of 1973. The district was thus the first point where Iranians landed in Paris after the 1979 revolution.”  Mr. Tavassoli also says the Iranian population in Paris is too small to sustain the Iranian businesses there; he says, fortunately, “the French love our gastronomy, our warmth and hospitality.”

Posted by Barbara Joy Cooley at 3:36 AM