September 23, 2015 -- On August 16, 2012, I wrote about the restaurant La Gauloise:  “We were also surprised by dinner last night at La Gauloise.  There must have been a change in chef since last year.  The food is actually spicy now!” 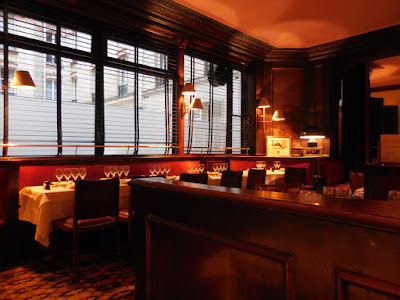 And then we didn’t return for three years.  Why?  I think the previous couple of visits there, before August 2012, had been a little disappointing.  And I didn’t like the looks of the change in the menu.  It was shorter, and seemed to be missing the daily specials section that La Gauloise used to have.

I was right in that there was a change of chef in 2012, and I was wrong not to return there for three years.

I now know that the real change in chef occurred in October 2012.  The guy with the spicy cuisine must have been transitional. 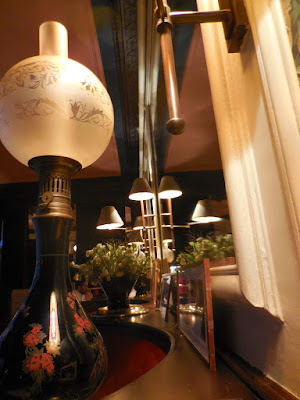 Pierre Sahut began running the kitchen at La Gauloise after we left Paris in the Fall of 2012, and we should have become regulars again in 2013.  At least we finally returned to dine there last night.  The dinner was wonderful.

Chef Pierre has worked for Alain Ducasse, and he went to Lycée Professionnel Hotelier Quercy Perigord for school.  The professionalism shows.

The servers have all changed since we last dined at La Gauloise, but the service is still very professional, as it always has been there.  We were warmly greeted and shown to an elegant table for three, with a banquette long enough for us both to sit there, side-by-side.  Our table was generous and uncrowded, with white linen tablecloth and napkins.

We were immediately given two kir royales and a mis en bouche of tapenade and crisps.  The server tried to give us the menu in English, and was pleased when I asked for the French version.  The bread basket arrived, accompanied by butter -- great French bread, great French butter.

We dined on classics.  Tom ordered the onion soup, which was as good as it possibly can be.  The Gruyere and seasonings were especially good.  My starter was thinly sliced terrine made of beef and pork.  It was refined and delicious.  Even more than usual, we shared the starters.

Tom chose the expensive steak, a “filet chateau au poivre,” at 31 euros.  He said it was excellent, as was the small mountain of great fries that accompanied it.

I selected the fixed price menu at 24.50, including two courses.  My main course was a supreme de pintade (guinea fowl), and it was delicious.  The three-course fixed price menu is 29.50 –  both are great values! 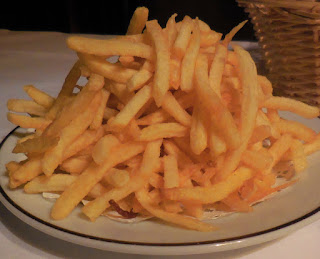 We shared a chocolate mousse, which was really more like a dense, rich, dark chocolate pudding, for dessert.

I love the old fashioned décor of La Gauloise, with its dark wood paneling, mouldings, old lamps, and framed photos of celebrities and politicians who dined there.  We were impressed by a large group of about 14 sophisticated young people who looked like they were graduates of the French equivalent of Hogwarts.  They engaged in lively conversation but kept their voices at a polite, even volume.  What a classy bunch they were!  We guessed that they are college freshmen-age – probably attending one of the grandes ecoles . 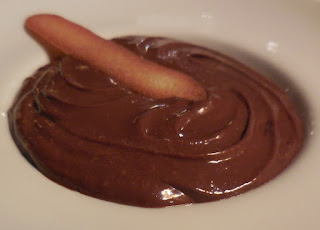 Next summer, we will be dining at La Gauloise more often.  It is an experience not to be missed, and definitely to be repeated.
Posted by Barbara Joy Cooley at 1:08 AM