Three favorites for the flaneurs of the fifteenth

In the past three days, we’ve taken our three favorite long walks in the 15th, somehow fitting them in between rainstorms.  Each walk is an hour and a half or so of strolling at a medium pace.   Each walk is different from the others.

The avenues walk entails walking down the avenue Felix Faure, across the rue de la Convention, which is called a “rue” (street) but really is more like an avenue, and then up the rue Saint Charles and back home along the avenue Emile Zola.  We meander off the main route to explore anything we happen to see along the way.  This walk covers the south/central/west part of the 15th arrondissement.

The next walk takes us up to the northern reaches of the 15th and into the 7th.  It includes strolling up either the rue Violet to the Place Dupleix and beyond, or up the rue du Commerce and the avenue de la Motte Picquet to the residential streets that parallel the southwest edge of the Champ de Mars.  Then we cross the Champ de Mars in front of the Eiffel Tower, and continue back down either the avenue  de la Bourdonnais or the little residential streets parallel to the northeast edge of the Champ de Mars.  Then it’s back home again on either the Place Dupleix/rue Violet route or the avenue de la Motte Picquet/rue du Commerce route.  We did that walk yesterday.

The third walk goes down the avenue Emile Zola to the rue Linois and the grand Beaugrenelle district, with all its glitz and glass and shopping mall, and then across the Pont de Grenelle to the place where the Statue of Liberty stands, where we turn right and walk down the length of the rustic Allée des Cygnes.  The return trip is just retracing our steps, but it might involve a detour in the mall to shop or to escape inclement weather.

In the evening, we walk again.  Tonight, it is a half-hour stroll each way to Le Tipaza, our favorite elegant North African restaurant on the rue Saint Charles, in the southern reaches of the 15th.  Actually, we’ll probably take walk number 1 to go to and from Le Tipaza tonight.

In these walks, we have plenty of elbow room.  We can walk arm in arm, or holding hands.  There is plenty of window shopping and people watching to do.  People around us are generally very polite.

Today was the day for Maria the Cleaning Lady, so we abandoned the apartment to her for a couple hours while we took walk number three and had brunch at Eclectic, the ultra-modern brasserie overlooking the riverfront at the end of the Magnetic section of the Beaugrenelle mall.

We went to Eclectic last Monday, too, and discovered that the croques and fries there are superb.  This time, Tom had the croque madame (with an egg) and I had the croque monsieur (with no egg).  Tom had fries, and I had a fresh green salad with a splash of vinaigrette.   These are the best croques we’ve ever had in Paris.  The cheese in the croques was especially nice.  We aren’t sure how they make this and serve it with either fries or salad for just 12 euros, but they do.

Everything else at Eclectic seems to be a bit overpriced.  But I think it is one of those places you go to for the ambiance.

The elegant interior of Eclectic was designed by a British decorator named Tom Dixon, I’d read.  He did a good job.  The place is brilliantly eclectic and comfortable.  This is Dixon’s first French creation.

According to the restaurant’s web site, at Eclectic, the couple has made a “union of chic Parisian and eccentric British, paying homage to the 1970s and revising the codes of the brasserie to favor a comfort that is more private.”  I’d say that’s a pretty accurate description!

Dinner last night was in another eclectically decorated restaurant, Axuria, on the avenue Felix Faure. We shared an elegant croustillant de gambas with a delicious lobster mousse in the middle (photo below). 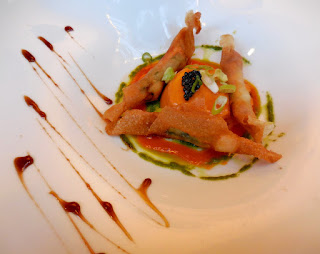 Then Tom had a small, tender steak (coeur de l'entrecote) and I had a roasted wild duck with rich, smooth polenta.  Both dishes had what seemed like the same dark, rich reduction sauce, and perfectly cooked veggies.

Tom had the classic soufflé Grand Marnier, which I also tasted. 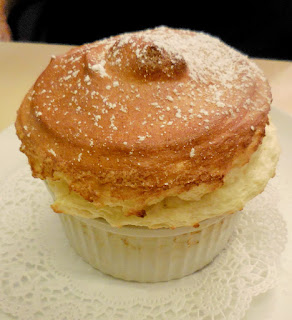 It was a beautiful and delicious dinner, with just the right walk home up the pretty avenue Felix Faure.
Posted by Barbara Joy Cooley at 5:37 AM