September 10, 2015 -- We were strolling along the avenue Mozart in the 16th arrondissement, when I noticed that we were at the intersection with the rue Serge Prokofiev.  Mozart eclipsed Prokofiev in breadth and grandeur.  Prokofiev was even overshadowed by the prefect Claude Erignac, who had a plaza named after him in this spot that is also home to the gendarmerie (police station) for the arrondissement.

The Place du Préfet Claude Erignac is a gracious yet modest Art Deco space.  Shade trees protect it from the sun, and its setback from the avenue gives it relative calm.  With the police station right there, and its location in the middle of the chic 16th, it is a place where you might feel safe and relaxed enough to take an afternoon siesta on a bench.  One gentleman was doing just that.

I’d mentally mapped out an hour and forty minute walk for us – up to and across the Pont Mirabeau, uphill on the rues Rémusat and George Sand, right along the avenue Mozart, and back downhill on the rues de l’Assomption and Boullainvilliers to the Pont de Grenelle.  Most of this territory we’d seen before, but we’d not been over there this summer.  And some of the streets we’ve not yet explored. 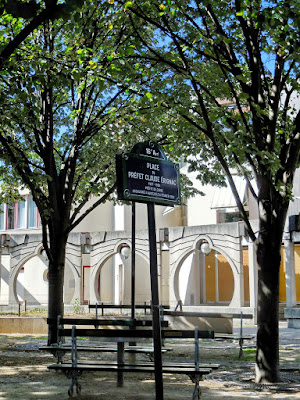 There aren’t so many major attractions in the 16th, and that’s the way this arrondissement’s residents like it.  Calm.

So who was this prefect, Claude Erignac, whose name is important enough to have a Place that overshadows Prokofiev’s street?  I consulted Wikipedia.

He was not a prefect in the mainland of France; he was prefect on the island of Corsica.  He was not from Corsica originally, but rather from Lozere, in the south of France.  He went to Corsica to take the job of prefect of the southern part of the island in 1996.  On February 6, 1998, he was assassinated.  His murderer – a Corsican nationalist -- was found guilty three times and then sentenced to life in prison.

In the summer of that year of 1998, Tom and I were given the task of chaperoning a study abroad session for some Ohio State University students in Bath, England.  The program was only six weeks long; so when it ended, we still had a month and a half before Tom had to be back on duty, teaching, in Ohio.  Why leave Europe?  We just decided, “Let’s go to France!”

Fortunately, this apartment in Paris, which we’d just heard about in mid-February 1998 while canoeing on the Sanibel River, became magically and immediately available to us that August.
That’s how we started summering in Paris.  This is our 18th summer here.

The rue de l’Assomption seems to be home to a number of substantial properties owned by the Roman Catholic Church.  One is named for the nun who started the religious order of the Assumption.  Her image is emblazoned on a couple of the buildings.  Such an icon.

When the rue de l’Assomption ended, we crossed the Place du Dr. Hayem and began our way down the rue de Boulainvilliers.  We passed by the huge, round Radio France building, which is still undergoing some renovation, and by the amusingly named Café de l’Ogre.  An “ogre” is probably what some people called the Radio France building when it was first built.

We admired the Statue of Liberty again, this time from the right bank foot of the Pont de Grenelle.  I realize now that Liberty is facing west and south – she is facing in the direction of her big sister Statue of Liberty in New York.  (Paris is far north of New York City, and obviously very far east of it.) 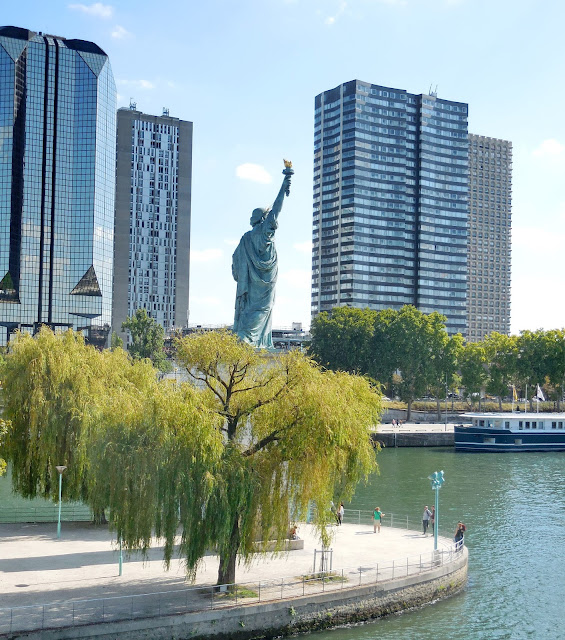 We finished our walk with the very familiar rue Linois and avenue Emile Zola.  In the evening, we were out again on the avenue Emile Zola, making our way to dinner at l’Épopée.
That’s where Tom especially wanted to go.

I know that my favorite restaurant this year is l’Alchimie.  I asked Tom what his favorite for this year would be.  It took him a while to decide, but then he said, “Le Pario.”  Le Pario has exceptionally inventive and delicious food, and the service is ultra-professional.  The décor is elegant, and it is a true haven with real air conditioning on a hot summer evening.  I can see why he selects it.

But we both are very fond of l’Épopée. 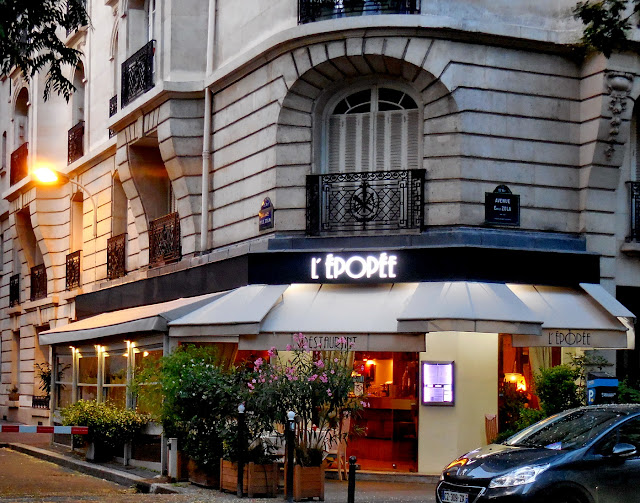 Dinner began with a mis en bouche of crème fraiche, herbs, and tomato purée.  It was exceptionally good; it awakened the taste buds.

Our starter course of chicken and mushrooms in a pastry was fine.  But the main courses stole the show.  Mine was a tender piece of cod, encrusted with peppercorns and served with softly cooked, colorful veggies and a carrot purée.  Tom’s was a tasty beef filet.  We shared a dessert of profiteroles with rich, dark chocolate sauce.

Cool, early autumn air greeted us as we left the restaurant.  This year, I am enjoying September in Paris more than ever.  That’s because we’re in the 15th, living among Parisians, in a very civilized fashion.  We’re here in this sunny, familiar apartment, in a good old building where we know the neighbors, and they are nice. 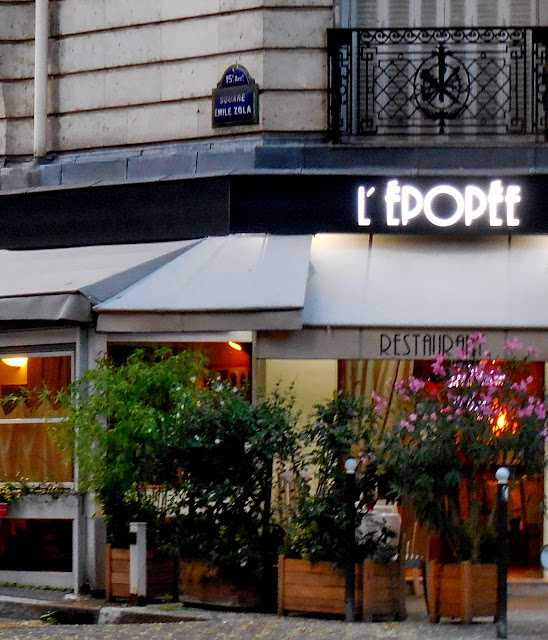 Posted by Barbara Joy Cooley at 4:08 AM

I bet there's one thing you'll miss about the 6th: Saint-Sulpice!

That's what I get for not reading ahead! Mais j'avais raison!