There's always something to think about

September 17, 2015 -- Whenever I’m bored, which is almost never, all I need to do is look at Paris street signs.  They stimulte my curiosity.  Never ones to miss an opportunity to promote their culture, the French name their streets after artists, philosophers, politicians, poets, composers, musicians, novelists, historians, teachers, architects, engineers, and more.  Look around, and you’ll find one that will intrigue you.  Many of these signs tell you not only the name of the person for whom the thoroughfare is named, but also that person’s birth and death dates as well as occupation.


Paris isn’t finished with naming thoroughfares.  The section of the Berge de Seine that we love the most is now named Promenade des Berges de la Seine André Gorz.  André was a philosopher, engineer, and journalist, born in the same year as my father (1923).  He passed away in 2007, a few years before my father died.

After seeing the sign, I wanted to know more about André.  Here’s what I learned.
Well, first of all, André Gorz isn’t his real name.  It is a nom de plume, as is Michel Bosquet, for a man who was really named Gerard Horst, who was actually born as Gerhart Hirsch.  Four names for one man!

For the sake of simplicity, I’ll call him André. 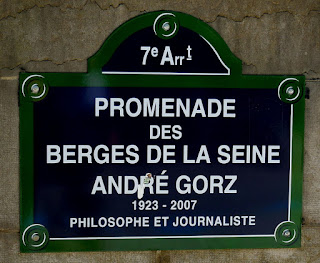 Philosophically, André was a part of the New Left movement which took on seriously leftist labor issues like a guaranteed income and distribution of work, even “liberation from work.”  I confess that I really don’t understand how an economy with “liberation from work” could possibly succeed.  But if we had dinner with André, maybe he could explain it.

André was born in Vienna, Austria.  His mother sent him to school in Switzerland to keep him out of Hitler’s army at the beginning of World War II.  He graduated with a degree in chemical engineering in 1945.

He must have been good with languages because he translated American short stories early in his career, around the same time that he became good friends with Jean Paul Sartre.  He began writing articles on philosophical topics and moved to Paris.  He got a real job working as a private secretary in the embassy for India.

I suppose it was to protect his real job that he started using pseudonyms like Michel Bosquet.  He began to write books, using his pseudonyms, and built his reputation as a theorist in the New Left movement which was inspired by Marx.  He thought of himself as a “revolutionary reformist.”
In 1964, André and others founded Le Nouvel Observateur, a weekly that is now a prominent French news magazine.

He saw the riots of May 1968 as an affirmation of his leftist views.  He even wrote an article titled “Destroy the University,” which upset some of his colleagues.

But André continued publishing articles into the 2000s.  He and his wife Dorine did not die natural deaths; after learning that she had a terminal illness, they both committed suicide by injection in 2007.  How sad.

André’s second-to-last book, Lettre a D. Histoire d’un Amour (2006) was about his love for his wife.
I don’t see any obvious connection between André and the Berges de la Seine, but I like to imagine that he and Dorine loved to stroll along the quieter sections of the riverbank, hand-in-hand.

Yesterday it rained, so the only stroll hand-in-hand that we were able to do was in the evening, when the rain stopped.  It was time to dine at Le Pario, Tom’s favorite Paris restaurant this year.  Le Pario is one of my top favorites, too.

After our stroll down the avenue Emile Zola, we were seated at a table by the window, and the server pointed out that it was next to the table where we dined last time we were at Le Pario.  That was August 22, too long ago for him to remember.  So these restaurants are keeping notes on loyal customers like us.  Hmmmmm.

We noticed that the British man at the table behind ours was the same man who sat near us at Axuria on Sunday.  He has good taste in restaurants.

The server brought us a lovely mis en bouche -- a little glass of warm, creamy-yet-frothy, garlicy soup – as we perused the menu. Tom selected a shrimp ravioli starter that came in a shrimp or lobster bisque, and I selected a pumpkin soup.  Both were gorgeous and delicious.

My main course was a ducking filet, which had been cut into chunks.  Le Pario’s Chef Eduardo seems to like cutting meat into chunks before serving.  The delicious duck was accompanied by a side dish of warm, rustic homemade applesauce. 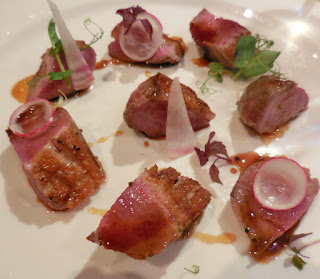 Tom’s main course was a tourte of “viande de soleil,” which was really beef and pork, he said.  It was like a superb pot pie.  Tom loved the pastry crust of the tourte.

For dessert, we shared a brownie made with coconut.  The brownie was cut into three medallion-shaped chunks, and served with a few peach slices.

It was an elegant and enjoyable dinner.  When the bill arrived, we noticed that the glass of white wine that I ordered, a Saint Véran, had been given for free.  Tom thanked the server.  The service and ambiance at Le Pario are top-notch.  And this particular dinner was good value.  Mostly, it was beautiful, and delicious.


The wind was picking up as we strolled home, and more rain fell during the night after we were safely tucked inside, listening to jazz piano music.
Posted by Barbara Joy Cooley at 4:14 AM