In a different light

September 11, 2015 – Poetry is posted in the subway cars.  Not every car is so blessed, but the one we took home after dinner displayed this verse from the first act of Ciboulette, a 3-act operetta by Reynaldo Hahn: 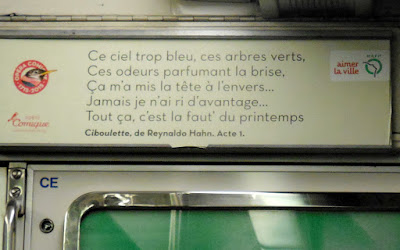 This sky too blue, these green trees,
These odors perfuming the breeze,
That puts my mind in a whirl . . .
Never have I laughed so well . . .
All that, it is due to Spring.

So what does Autumn bring to us?  More of the same, with a sky too blue, odors perfuming the breeze, leaves falling in a whirl, good times and lots of laughs with friends.

Six of us met at Jim and Maddy’s apartment in the 6th arrondissement for a drink before dinner.  We laughed, we talked nonstop, we even talked about politics with no arguments, even though we’re a politically diverse group.

We walked to dinner at La Bastide Odéon.  The restaurant is not nearly as good as it was a year ago, but still we enjoyed ourselves.  We must!  Life is short.

Before dinner, Tom and I walked around for an hour and a half.  We ducked into the indoor Marché Alimentaire at Saint Germain.  The familiar market was very quiet, perhaps because the adjacent boutiques/shopping center were completely closed up for renovations.  Or perhaps it is the economy; the Marché, while wonderful, is pricey.

We walked around to the front of the Saint Sulpice church, to the square.  I miss being near that church in September.  I would get up on Sundays and go to the end of mass, and the organ recital afterwards, when we were staying in the apartment where Maddy and Jim are now.  That great, hulking, somber church and its magnificent organ are unmatched.

But oddly, when we walked through the nearby Luxembourg Gardens, I didn’t have the feeling that I’d missed that park at all.  In fact, I was reminded of the feeling I often have in mid-September:  a feeling that it is just about time to go home to lovely Sanibel Island.  The Luxembourg Gardens are stunningly beautiful, but maybe a little too crowded at this time of year.

The same angle of sunlight that makes the shadows longer now in the Luxembourg Gardens is what makes our apartment in the 15th sunnier than ever.  The sun, resting a little lower in the sky, now shoots its rays directly through the French doors, with gusto, all afternoon.

When we were in the gardens, we stepped into the Orangerie to check out the current exhibitions.  One was a black-and-white photo exhibition featuring images of people who returned to Paris in 1945 as World War II ended.  Most of these were soldiers who had been prisoners of war.  DeGaulle was also featured; and so were notable people like Leon Blum, who had a special type of confinement in a house on the edge of the camp at Buchenwald.

There were very few photos of Jewish concentration camp victims returning to Paris, although there were photos of their family members anxiously checking the postings on the bulletin board at the Hotel Lutece.

There were also photos of American soldiers who had been to the concentration camps, to free the people imprisoned there.   I was thinking that if my uncle George had not been shot by a sniper near Nancy, he might have been one of those young men who witnessed the end of that crime against humanity.

The other exhibition sharing the Orangerie space could not have been more different from the returnees photos.  It was a collection of color photographs of historic French country houses – farm houses, mostly – taken by kids. 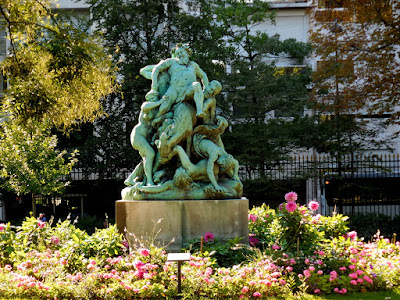 We continued our walk through the gardens, and when we reached the gate at the south end of the park, we exited and walked through the two parks to the south, all the way to the fountain of the four corners of the earth.

These two little parks were loaded with squealing, running, energized, laughing children.  Fecundity was on display.  There were so many kids!

When we re-entered the Luxembourg Gardens, they seemed calm by comparison.  We walked to the elegant Medici fountain, found ourselves a couple of metal chairs, and meditated as we gazed into the water and watched ducks.  These birds were racing to and fro, in optimistic anticipation of bread crumbs tossed by humans.

We’ll probably go back to the Luxembourg Gardens on Sunday afternoon, weather permitting, for a free concert by the Jazzific jazz band.

Until then, we'll enjoy the good life in the 15th!

Posted by Barbara Joy Cooley at 3:30 AM