September 15, 2015 -- More and more, Paris is becoming an international city.  More and more, English is used to communicate with people from so many different lands who find themselves in the City of Light.

Signs with less-than-stellar translations into English are common; English is a difficult language.  However, well-funded public agencies in France should be able to come up with passable translations.

Yesterday, Tom and I were stopped dead in our tracks by a sign posted in a construction zone around one of the entrances to the La Motte-Picquet metro station.  This is an important station because several metro lines come together here.  It is also the station that is near significant landmarks like UNESCO and the Eiffel Tower.

RATP, the agency that runs the metro, the trams, and the bus system in Paris, is state-owned.  It is a huge operation in the Île-de-France region, with 3 billion passengers per year.  But now it has grown even beyond the region; it operates transit systems elsewhere in Europe, Asia, Africa, and the Americas.

So RATP can afford to have top-notch translators. 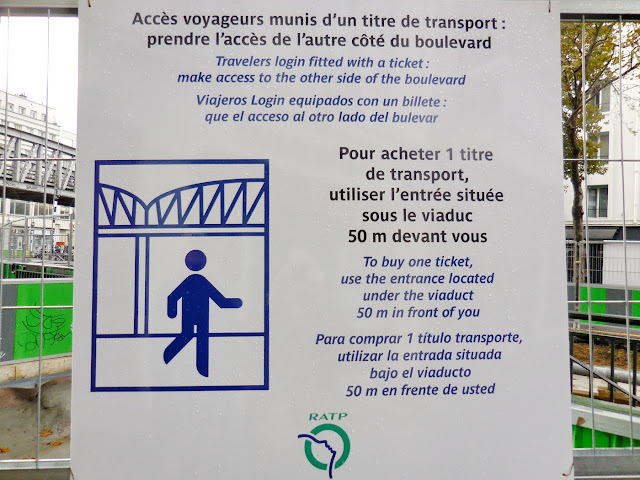 The first sentence is translated into unintelligible gobbledygook.  The second sentence has a decent translation.  Did two different people translate the two different parts of one sign?   The first part of the sign is not particularly difficult to translate.  The translation should be, “Travelers who have a ticket should enter on the other side of the boulevard.”

“Munis de” isn’t too tough to translate.   Literally, it means “furnished with,” but it makes more sense to say “who have a.”

“Prendre l’acces de” literally means “to take the access from,” but it makes more sense to say “should enter on.”

The last part of this sentence’s translation was done properly; “l’autre côté du boulevard,” does mean “the other side of the boulevard.”  Oh, yes, the translation is also correct for “un titre de transport,” which simply means “ticket.”

I remember years ago when there was only a sign in French on the access at the other side of the boulevard.  Consequently, lots of foreigners (including us one time) would enter there, and then would have to exit and cross the boulevard to use the other entrance, where they could buy a ticket.  At least RATP is now making an attempt, however feeble, at communicating in other major languages.

One of the places where RATP operates the rapid transit system in Africa is Algiers, Algeria.  We dined in Algeria last night – or as close as we can get to it in Paris.  That is to say that we dined at Le Tipaza, the restaurant on the rue Saint Charles which is named for a town on the coast of Algeria – a town known for its sandy beach.

We adore Le Tipaza.  The service is professional and friendly; the décor is beautiful, exotic, and uncrowded; and the food is high quality and excellent value.

I wanted a lighter dinner because we’d had brunch at Eclectic earlier in the day, so I ordered the Grillade Royale (samplings of lean grilled lamb, beef, and merguez sausage) with homemade, healthy ratatouille, and then a light and refreshing homemade crème caramel for dessert.  Tom had a similar Grillade of grilled meats, including beef, and fries.  Then he had a magnificent order of profiteroles.  Oooh la la. (Photo below.)

Fortunately, we walked for a total of two and a half hours yesterday.
But I did also take the time to check out Heather Stimmler Hall’s most recent Secrets of Paris newsletter.  She included an article about what Parisians can do to help the Syrian and Iranian refugees.  A few of the refugees from the latest massive surge into Europe are starting to show up in Paris.

We have not seen these refugees at all, but Heather has noticed a growth in the encampment of recent immigrants in the 13th arrondissement on the banks of the Seine.  That makes sense because the Grand Mosque of Paris is over that way; refugees would logically camp out where the support of the Mosque is nearby.

Heather points out that “In France, those without passports or visas are called ‘sans papiers’ (or Without Papers), not ‘illegal aliens.’  While they are waiting for their asylum requests to be processed, they are not allowed to work and must rely on the State and charitable organizations for everything including food, housing, and medical assistance.”  [I note that we use the term “undocumented” as well as “illegal aliens” in the U.S.; “undocumented” means the same as “sans papiers.”] One day in church on Sanibel a couple years ago, a man asked me about France’s role in the history of Syria.  I looked into the subject and wrote about it in my Paris Journal on September 11, 2013.  Upon re-reading it, I see why France should have a major role in providing refuge for Syrians.

Take a look, and see what you think.
Posted by Barbara Joy Cooley at 3:32 AM