The French Mini Moves In

Tom was missing the Google home mini already, after just a few days away from home.  So on my morning walk, I stepped into Darty (a chain of appliance/electronics stores) to buy one for him.

This is a special shopping weekend, with stores opening early and closing late, and special sales everywhere.  The Beaugrenelle mall's Darty was supposed to open at 9 today, but because of the Beaugrenelle mall security, I guess, the store didn't open until 10.  So I had a nice stroll on the Allée des Cygnes, then joined the masses entering the store when doors opened just before 10.

All the mini boxes on the shelves were empty!  A helpful young man who works for the store approached me, and I said (in French) hello and that please, I'd like to buy a Google home mini, but all the boxes are empty.

He led me to the computer terminal where I had to give my name, address, postal code -- just to buy a smart speaker!  I paid by credit card, and then he printed out a full page of information.  He led me over to another desk, where I presented this paperwork and waited while my mini was retrieved from the back room.

So bureaucratic.  So French.

When I had my mini and paperwork in hand, the man at the counter wished me a good weekend, I thanked him, and off I went, up the stairs, checked by security, and out onto the hot street again.

This was one of the better experiences I've had with Darty over the years.  We've purchased a microwave, a coffee maker or two, a toaster, and a number of other little things there in the past.  Sometimes the sales people have been surly.  Not so much anymore.  They're pretty nice, but still bureaucratic.

The French for smart speaker is "enceinte intelligente."  The noun ''enceinte" (speaker) is the same as the adjective "enceinte" (pregnant).  I wonder about that etymology!

Early this morning, I walked to the food market on the Avenue de Saxe (Thursdays and Saturdays).  Once again, it was so early that most of the vendors were still unloading and arranging their produce and other food in their booths.  Only a few were mostly set up, even though it was 7:30AM and the published opening time for these markets is 7AM.

Walking there then is fun, because there is activity to see, yet the market is not yet crowded.  By 8AM I am certain that all the vendors will be ready to sell, but by that time, the city will be hot.  Very hot.  We have three more days of this heat wave!

Some people think that the Avenue de Saxe market is especially prestigious, compared to all the many other neighborhood food markets in the city.  I don't think it is all that different from the others; however, the shoppers in the 7th arrondissement are probably more affluent than the average Parisian.

All the Haussmannian apartment buildings in this quarter were built around the same time, in the years after a slaughterhouse was demolished on that site.  The buildings are handsome, and so are the boulevards nearby -- the Avenue de Breteuil being the grandest of them all, with its fountain and the gleaming dome of the St. Louis Church at Les Invalides at either end.

The neighborhoods in between this one with Place Georges Mulot and the one where we stay are modest.  They include what I call "old village-y buildings" that date back to a time when this area was outside of Paris, and included the villages of Vaugirard and Grenelle.  These are much older than the late 19th century Haussmannian buildings.

Mixed in with the charming old village-y buildings are newer buildings, some of which are not so beautiful.  But there is one huge, curving apartment building built in the 1970s or so, which has green area around it.  While this structure is a monstrosity, it clearly is loved by its residents, who all seem to treasure the balconies that grace each apartment.  Because of the trees and greenery around this building, birds live there in abundance.  It is delightful to walk by there in the early morning to hear them singing.

I was surprised to see a new flower garden planted in a space next to the Bricolage hardware store nearby.  It must be a neighborhood project.  These kinds of gardens are springing up all over Paris; the City is encouraging residents to create them in whatever space they can find.


In one area that had no greenspace in the 7th, I noticed that the neighbors had terracotta-like tall pots made to go over and around several of the metal bollards on their sidewalks.  Then they filled the pots with dirt and planted flowers.  Cool.
Posted by Barbara Joy Cooley at 12:48 AM No comments:


Tom's belated birthday dinner was at Le Poulpry last night.  This elegant restaurant is situated in a 300-year-old former stately home that is now the headquarters of the Ecole Polytechnique (Polytechnic school), and is only a block and a half south of the Musee D'Orsay -- a special place for a special occasion.  I found the establishment on Lafourchette.com in a special promotion of elegant restaurants.

The place is perfect.  The tables were arranged with plenty of space in between -- rare for a Paris restaurant.  The decor was elegant yet simple and honest, not fussy.  The service was professional and engaging, yet not intrusive.  The food was divine.


Our reservation time, at the restaurant's opening hour of 7:30PM, was early by Paris standards.  That allowed me to photograph the dining room before it filled with people. 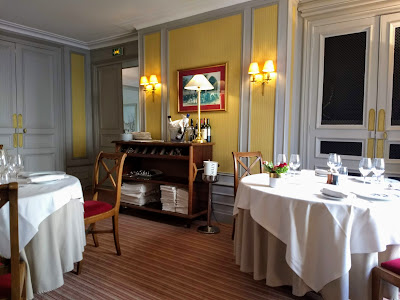 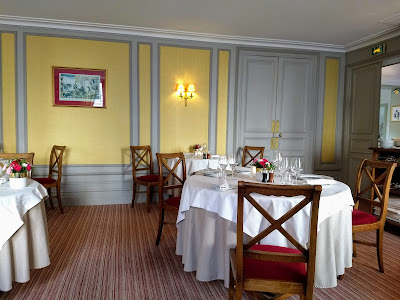 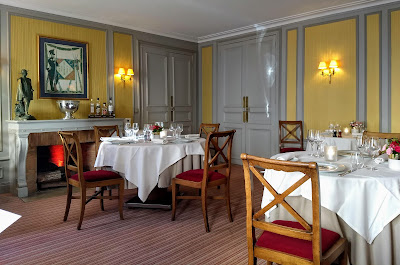 We'd walked only a few blocks in the summer heat and then taken a taxi the rest of the way.  All taxis in Paris seem to be air conditioned now.  That certainly was not true 21 years ago, when we started summering in this city.  Yes, this is our 22nd summer in Paris.  Time flies.


Our server spoke French and English equally well.  He correctly assumed that we were American; usually, folks here think we are German or English or Canadian people who speak French  -- unless they know English so well that they can discern the various accents. I answered, "Floride."  Later, I asked him what part of France he was from, and he answered, "Paris," but said he'd spent a long time in Hong Kong.  That's where he learned his British English.  He'd also spent time in Cambodia. 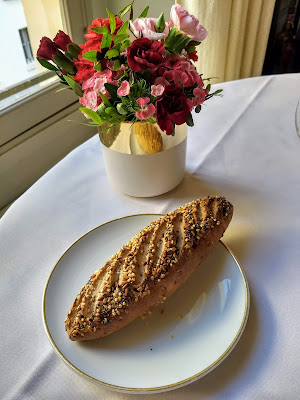 We shared a starter course of foie gras and peach chutney.  Then we each had fish main courses -- John Dory for Tom, and drum fish for me.  Mine came with flavorful chanterelle mushrooms in a rich, creamy sauce.  Tom's fish came with a light beurre blanc sauce and unusual vegetables, including miniature eggplants.  Tom ordered a cafe gourmand for dessert.  Everything was delicious and beautiful.


The repast took a full two hours, so the air had cooled just slightly when we left the restaurant.  We walked home slowly, through the 7th along its charming "spine," the rue St. Dominique, and then across the Champ de Mars, through the Village Suisse antique zone, and down our lovely rue du Commerce, home again in the 15th.

It took a while for us to cool down in the apartment.  Today, tomorrow, and Friday will be even hotter, so we will probably forgo restaurants until Saturday.  To me, it is torture to sit in a hot restaurant for a period of time, feeling trapped.

Instead, we will have picnic-like suppers, with all kinds of interesting little things to eat.  This, the apero dinatoire, is the way to go during a heat wave.

The apartment is not air conditioned.  So, one of us gets up at about 4AM, when the city air has finally cooled to about 70 degrees F, to open the windows.   We go back to sleep.  I get up and close the apartment up at 7AM, when the risen sun begins to cook the city.  Awnings down, sheer drapes drawn, and fans running, we work at the computers.  At 3PM, we'd normally quit working and start walking, but not during the heat wave.  3PM is going to be siesta time for the next four days.

So I did my walking early yesterday and today.  Yesterday, I walked to the rue St. Charles, and continued up and down the full length of its open-air food market (Tuesdays and Fridays).  Today, I did the same at the market on Boulevard de Grenelle (Wednesdays and Sundays).  I walked some other shopping streets as well.  But shopping?   No.  It was too early in the day for that.

Swirling into summer in the city

This is the view from my work station in the Paris apartment this summer.  This is where I will share our adventures with you, and this is where I'll help Tom, my husband, with his latest textbook (The Norton Sampler, 10th edition). 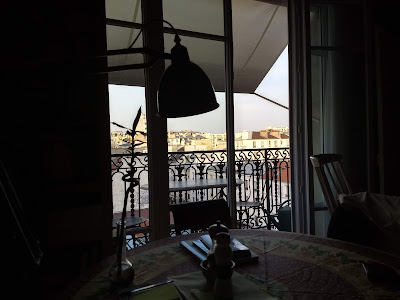 I tell people that we get more work done on the textbooks in Paris than in Sanibel because there are fewer distractions here.  As wrong as that sounds, it is true.  Both places are wonderful places in which to create.  But for us, being in Florida means being involved in many efforts.  Other people take wonderful care of Paris, leaving us time to do what we do at our computers.

We don't work long days.  We get out late every afternoon to walk the city, and then we usually dine out at one of our many favorite restaurants.  I say that's what we do, and yes, that is what we intend to do, but sometimes the weather doesn't cooperate.  For example, this week promises a four-day long heat wave.  On those days, late afternoon is not the time to be out walking.  So this week will be different.

Yesterday's taxi ride from the Charles de Gaulle airport to the apartment was perfect.   Since the Paris taxis have reformed themselves, there is a flat rate -- 55 euros -- for the ride from the airport to central Paris.  That's about right, I'd say, except for those days when traffic jams occur.  And that would be Monday through Friday ten months of the year -- including yesterday.

The taxi driver did everything just right this time.  He took the most direct route, which brought us down through the picturesque 17th and 8th arrondissements on the Right Bank.  In the 8th, we went swirling through the grand roundabout called Etoile, around the Arc de Triomphe.  Riding through Etoile is fun and exciting, but I wouldn't want to be the driver.  This time, I made a quick video of part of that swirl. 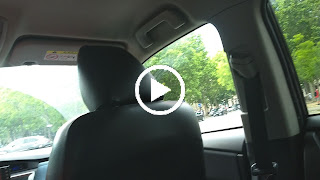 After the swirl, we rode down to the Seine on the Avenue de Wagram, which was jammed with cars.  So was the Pont de l'Alma, where we crossed the river in view of the gleaming domes of the relatively new Russian Orthodox church.

The driver skillfully made his way around the Champ de Mars and went right to the Place de la Cambronne, as I had hinted that he should.  Nine times out of ten, drivers approach our apartment's building from the wrong end of the block -- our street is one-way.  But this driver expertly glided down the rue de la Croix Nivert, turning properly onto our street without breaking any rules of the road, while avoiding being hit by a couple crazily careless drivers.  We tipped the driver very well. 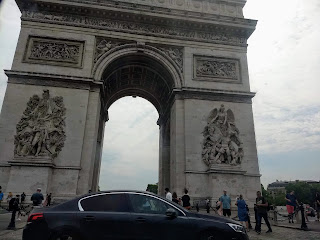 We rested, unpacked, and made it to our favorite neighborhood grocery and bakery before they closed, where we used our shopping trolley to stock up on breakfast and lunch foods and beverages, as well as apero dinatoire items for the evening.  More about that later.

For now, just know that we made it.  We're here.  Let the summer begin!
Posted by Barbara Joy Cooley at 7:30 AM 1 comment: