The world is his oyster

There’s a ship, and it sails the ocean blue, on an “Earth and Ocean” mission.  For the moment, it is between expeditions, resting in Paris for four months – much as we rest in Paris for three months, between busy seasons on Sanibel Island.

This three-mast schooner named La Boudeuse arrived at the port du Gros-Caillou, in the middle of the Berges de la Seine project on the Left Bank, in at the beginning of September.  In mid-January, it will participate in various demonstrations and, most importantly, in the great climate conference, COP21, that will take place at the end of the year.


Its previous expedition was a world tour of three years from 2004 to 2007.  It was inspired by historical 1766 to 1769 expedition of a frigate also named La Boudeuse.  On that trip, Louis-Antoine de Bougainville took “learned men” with him to sail for science’s sake instead of sailing just for financial gain or exploitation.  One of the botanists, Philibert Commerçon, found a lovely flowering bush on this expedition and named it for Bougainville; the bougainvillea (see my journal entry for September 20, 2012, for the juicy story about Commerçon) is well known and loved by those of us who live in the subtropics or tropics of the Americas. 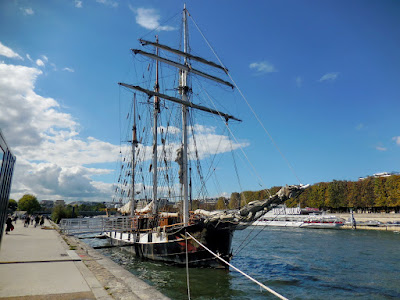 Today’s schooner named La Boudeuse was built in Holland in 1916.  It has been a field operation of the French project called Grenelle de la Mer since 2009; that project’s goal is to work toward “improving environmental issues associated with the sea.”  What about its name?  A "boudeuse" is a slow growing oyster.

The schooner’s captain is the writer Patrice Franceschi, and its crew includes 26 people.  It is 46 meters long, and has an 8,000-liter fuel tank.  Its water tank is only 2,000 liters, but it has a desalinator that can process 400 liters per hour.

Even more fascinating than the ship, however, is the list of books by Patrice. He’s been around!
[Sources: la-boudeuse.org and Wikipedia.com]

La Boudeuse was one of the dazzling sights we saw on a three-and-a-half-hour walk yesterday, the first day of the European Heritage Days weekend in Paris.  This year, I examined the Heritage Days program and found nothing that interested me as much as ambling aimlessly does.  We ambled, and in the second half of our walk, we experienced Heritage Days a little bit because we saw long lines of people waiting to see landmarks such as the Assemblée Nationale and a drum corps in old-fashioned uniforms performing in the street in front of the École Militaire. 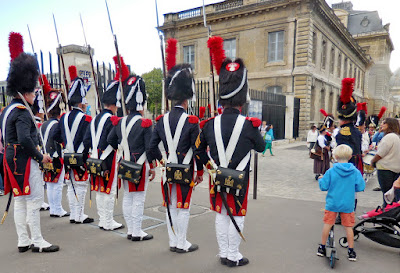 In the evening, we walked to the center of the Grenelle neighborhood at dinnertime.  The church was just then disgorging its people; that’s a sight we often see as we walk to dinner at about 7:20PM.  The rue du Commerce was still alive with activity; in the afternoon, it had looked like a street in Manhattan – brimming with pedestrians and shoppers. 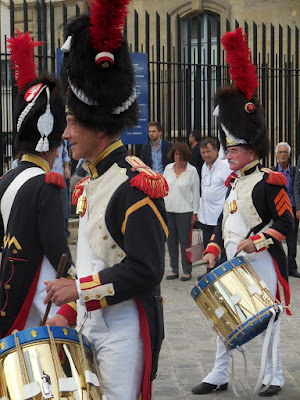 We turned left in front of the church and walked a short distance up the rue Madamoiselle to Bacco, our favorite new restaurant for this summer.  This was our third visit to Bacco, and already the hostess recognized us and greeted us warmly.  We were seated at the usual front corner table.  They know our name at Bacco. 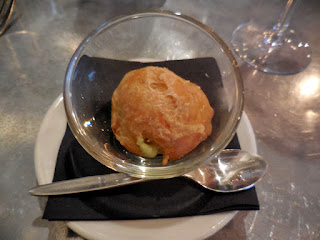 We began the repast with a cute mis en bouche of a round pastry filled with puréed peas (photo above).  That may sound strange, but it wasn’t.  It was a bite of pure comfort food.

Then we shared the bavette starter course:  a cold beef salad with Asian marinade and herbs (photo below).  This is a stunningly delicious dish; Tom says he could eat it five times a week. 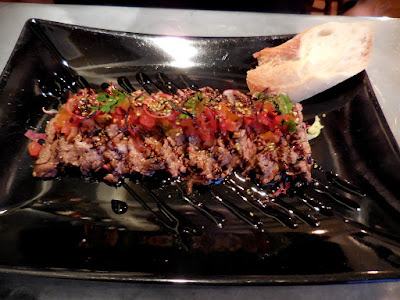 The special of the day was a lamb shank (photo below), which I ordered, and Tom ordered the risotto rouge, which I’d had before.  It is a spicy, rich risotto with three large prawns on top. 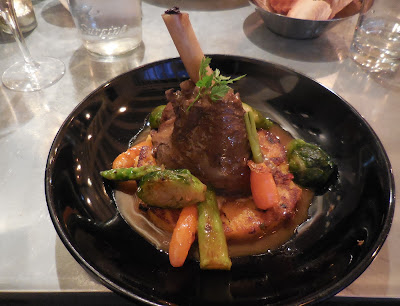 We finished by sharing the delisiozo dessert – a small scoop of ice cream; a rich, dense, Valrhona chocolate and vanilla cake-like confection; and a little crunchy tangle of spun praline cream. 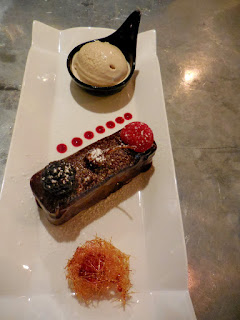 The dinner was not inexpensive; but it was memorable and wonderful.  The décor is nice, and lighting is done well.  Reception and service are gracious and warm.


Bacco was a fine way to end such a beautiful day in Paris.

Posted by Barbara Joy Cooley at 2:50 AM