September 6, 2015 -- “Gaspillage” --  To an Anglophone, it’s a word that sounds like some form of severe indigestion.  In reality, it is the French word for “waste,” and it is particularly being used these days to discuss the problem of food waste.  Two kinds of food waste concern restaurants and their customers.


First, there are the products that have not been served and must be thrown out, as required by regulations, from the kitchen.

Second, there is the food left on the plate.  That’s today’s topic.

In 2009, a “gastronomie collective” called Mille et un Repas (A Thousand and One Meals) began its “Zero Gaspil” campaign.  This affected mainly school cafeterias, as far as I’ve been able to discern.  First, the cafeterias eliminated the classic cafeteria lines, and replaced them with “islands” like the salad bars we’re familiar with – except that some islands have hot food, and some have cold food like salads, gazpacho, fruit, breads and pastries.

Then the kids were taught to take only what they were pretty sure they’d eat.  The kids even clear their own plates and stack them in the trays that go into the dishwashers!  These simple steps reduced the average food waste from 167 grams per plate to 10 grams per plate!

For other kinds of food operations, some working groups were formed in 2013 to develop a “covenant” against food waste.  The main objective of the covenant is to halve the amount of food waste in France by 2025. 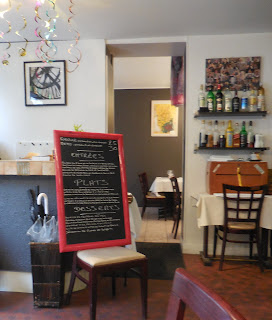 Following the success of Mille et un Repas and the forming of the covenant, commercial restaurants are now just beginning to embrace the idea of reducing food waste with the support of the UMIH Restauration – the main association of restaurateurs in France.  UMIH stands for Union des Métiers et des Industries de l’Hôtellerie, but I think it is more of a professional association than what we think of as a "union," as in "labor union."  The organization is for people who run restaurants, hotels, night clubs, and cafes.

In July, UMIH announced that it is engaging in a campaign to promote the use of doggy bags to address the problem of food waste.  Not having a word for such an item, the French are using the English "doggy bag." We’ll see how effective the UMIH effort is.  I’m a little dubious, because so far it seems that UMIH’s main activity has been to sign a contract with a company called TakeAway, which then sells expensive boxes and bags to the restaurants, for use in packing up customers’ leftovers.

While hundreds of restaurants throughout France have signed up to be TakeAway clients, only one restaurant in Paris has done so, according to the TakeAway web site.  I think it would be better to have an all-out publicity campaign to promote doggy bags nationally.

A friend of mine was under the impression that it is illegal for restaurants to give doggy bags in France.  My research indicates that it is illegal, perhaps, for restaurants to give away leftover food from the kitchen.  But according to UMIH, the restaurant’s responsibility for the food ends from the time the meal is delivered to the customer’s table.  From that point on, the restaurant is not responsible for the conditions in which the meal is stored and consumed.

So, our use of our ZipLoc bags is perfectly legitimate, even if it may be unconventional.  But it would be better if the restaurant would provide containers.  These don’t have to be the expensive, fancy ones that TakeAway sells.  The kind used by the ubiquitous Chinese takeouts (and by the Stephane Martin restaurant) – a recyclable plastic dish sealed with cellophane film on top – is ideal.  The newer paperboard boxes used by some American restaurants are also fine.  But polystyrene (“Styrofoam”) is to be avoided, for environmental reasons (petroleum product, difficult to recycle, bad for landfills).

The need to reduce food waste is obviously an environmental concern.  But there is also a socioeconomic angle here.  Food is becoming scarcer, and so food prices have risen just about everywhere.  Now there is a flood of refugees entering Europe.  As one Syrian refugee recently said in Hungary, “We don’t want to stay in Hungary.  It is a poor country.  They cannot even afford to give us any food.”  (Related:  See my entries for July 25 and 26, with photos of Syria and information about the Maison des Journalistes and exiled photojournalist Muzaffar Salman, a Syrian refugee in Paris.)

The refugees are rightfully interested in going to the places where there is more hope of someday finding a job.  They want to go to countries like Germany, Britain, and France.   How will these countries be able to feed them all?  Eliminating or greatly reducing food waste in these wealthier places is a good place to start.

We did our part to reduce food waste last night at l’Alchimie, on the rue Letellier.

Our starter course, which we shared, was a delicious slice of foie gras with a layer of fig confiture in the middle, and a layer of wine jelly on the top edge. There was no waste there; not one bit.

Tom had a rib steak .  It was topped with a bright yellow “emulsion savora.”

According to SimplyGourmand.com, “The recipe of Savora dates back to 1899. The French are partial to this unique condiment, made of mustard seeds, cinnamon, Cayenne pepper, nutmeg, curcuma, cloves, celery, garlic, tarragon, vinegar and a touch of honey.”  So it is basically a spicy honey mustard.

Tom ate most of the steak and all of the emulsion savora.  The leftover steak he put into the ZipLoc bag, which will serve him well for lunch today.  Likewise, my bass was large enough that I put some of it, along with the olive-potato mix, into the bag.  That’s my lunch.

For dessert, we shared a moelleaux au chocolat, and I swear that Chef Eric upgraded the type of chocolate since the last time we had this dish.  It was wonderfully deep and rich – as rich as the moelleaux at Stephane Martin’s – but less expensive.

Chef Eric was still doing all the serving himself.  We wonder who he has working in the kitchen whom he trusts so well.  A man who looked like he was from Pakistan or Bangladesh had entered the restaurant ahead of us, and he went directly back to the kitchen.  Could it be him?  Whoever is back there, stays there.  We will have to ask Eric about it next time we dine at l’Alchimie.  We’d love to meet the alchemist’s apprentice!


And there will certainly be a next time, and a time after that, etc.  Right now, l’Alchimie is still my favorite restaurant in Paris.
Posted by Barbara Joy Cooley at 1:45 AM