Autumn has arrived in Paris.

Autumn has arrived in Paris.  After working at the computers, while the sun shone in the late afternoon, we went for a walk.  I thought we’d go to the Allée des Cygnes because rush hour was just starting, and that’s a nice place to go to escape the automobile traffic.


But as we approached the Seine on the rue Linois, the wind picked up.  That wind was chilly, and Tom did not have a jacket.  He shivered.  I suggested we enter the Beaugrenelle mall and do the rest of our walking there.  So we walked through the entire thing, on every level, and then walked through the second floor wing that lead back toward the Place Charles Michels.


The walk back to the apartment along the leafy avenue Emile Zola was pleasant enough, and Tom stopped in the bakery on the rue du Theatre to buy a baguette.


In the evening, we had another walk, down to the rue de la Convention – which is looking good these days -- and over to the rue Saint Charles, then a block south to the rue Sebastien Mercier, home of L’Ardoise du XV. 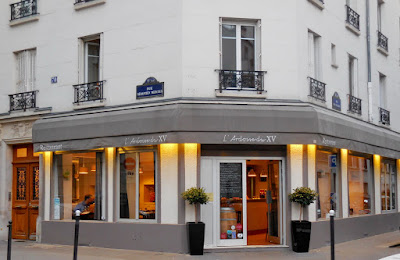 This was the second time we’d dined at L’Ardoise, although it has been in business since 2012.  The proprietors are Chef Maxime Vilatte and his wife Marie.  Chef Maxime had worked with Philippe Legendre at the Four Seasons – George V hotel, and will David Alves at La Table de Joel Robuchon.  With that solid background, he was ready for his own place.


Chef Maxime and Marie have qualified for the Maitre Restaurateur designation, and that was one of the characteristics that attracted me to the place last month.


Now I’m attracted by the inventiveness of the cuisine.  The food isn’t the same-old same-old; when you’ve been in Paris for months and think you might be tired of French food, you go to a place like L’Ardoise du XV and you change your mind.


I ordered the calamari starter and was pleasantly surprised by its spiciness.  The sauce, which was supposed to be Mediterranean, was actually a piquant curry, and the calamari was not overcooked.  The dish woke up my senses.

Next came our main courses:  a volaille fermière rotie aux girolles for Tom, and a ventrèche de porc caramelisée, pommes écrassées a l’échalote et ciboulette for me.


Tom’s chicken was a tender, juicy pressée of roasted chicken – both white and dark meat – and it came with a velvety potato purée as well as the girolle mushrooms.


My pork belly was perfectly sautéed, and the potatoes were not écrassée (smashed), they were really a fine purée with tiny bits of green onions and chives throughout.  At first I thought the meat looked like mostly fat, but that was not the case; it was a tender, juicy cut of pork.

Tom had the homemade millefeuille au chocolat for dessert; it was delicious.


The server was Marie, I think, and she was doing a fine job of keeping order in the dining room.  The place is neat as a pin, and perfectly organized.


In the evening, I resumed reading.  One of the tomes I’m reading now is Emile Zola’s The Ladies’ Paradise (Au Bonheur des Dames), a novel that is roughly based on the rise of the Bon Marché department store in Paris.


I say “roughly” because there are many differences between the fictional character Octave Mouret and the real-life Aristide Boucicaut of Bon Marché.  In fact, I think Mouret is an amalgam of Selfridge in London and Boucicaut in Paris.  So it isn’t surprising that BBC’s adaptation of Zola’s book takes place in Britain instead of France.  I’d already finished watching BBC’s Mr. Selfridge series, and last night I started BBC’s The Paradise series, even while I’m still reading The Ladies Paradise.


Each time I’ve read a Zola book, I have complained to Tom about what I don’t like about Zola’s writing.  Zola’s style is overly flowery, and sexist.  (Last summer, I read Le Ventre de Paris (The Belly of Paris), a novel that takes place in the old market of Paris, Les Halles.)  Tom says I haven’t read Zola’s best works yet:  Germinal, and L’Assommoir.  Now I’ve downloaded an edition of the complete works of Zola on my Kindle Fire, so I’ll read those next.


I’m reading these in English, not French.  I’d read them in French, but I know that with Zola’s overly flowery prose, it would not be easy.


I agree with Elmore Leonard, who said:  “If it sounds like writing, I rewrite it.”


Leonard also wrote a handy list of ten “commandments,” that is, things to avoid when writing.  Zola violates the last two of those “rules”:


10.  Try to leave out the part that readers tend to skip.

On that note, I think I’ll stop writing for today.  (Click here for previous day's journal entry.)
Posted by Barbara Joy Cooley at 4:06 AM

P.S. Also love the writing advice, which I've taken to heart. #10 reminds me of Yogi Berra's, "Nobody goes there anymore, it's too crowded."