Through the eyes of Sophia

September 5, 2015 -- Nathaniel and Sophia Hawthorne visited Paris for a week to ten days in early January 1858.  They stayed at the grand Hotel du Louvre.

I've read and transcribed hundreds of Sophia's letters, and was curious to know if she wrote any during her time in the City of Light.  Sophia is a master of description, and she had an artist's eye.  I was itching to know what she thought.


In the transcripts and annotations that Tom and I worked on decades ago, I found a note that indicated the presence of a letter from Sophia to William Henry Channing on about January 8, 1858, in the collections of the Maine Historical Society.  We had not yet obtained a copy of that letter.

So I wrote to the Maine Historical Society (MHS) a couple weeks ago, sent them a check, and now I have a PDF copy of that letter.  The MHS thought the letter was written to William Ellery Channing, but in its text, Sophia wrote:  "I thank you very much dear Mr. Channing, for your kind letter in reply to mine.  I rejoice that you are in a pleasanter  house and that the Hope St. Society is so agreeable to you."

I did the research.  William Henry Channing (1810-1884) became the minister of the Hope Street Unitarian Chapel in Liverpool, England, in 1857.  So our notes were correct; the letter is written to him.

The letter is incomplete.  Its salutation and beginning are missing.  But the letter does contain this, about Paris, as seen through the eyes of Sophia Hawthorne:


The Englishman said it was very unusual; but that he had told him we were going to Rome immediately, and that we were a party of six, and that there was nothing contraband in our multitude of trunks.  The Frenchman looked benign upon us, and said, as he gently closed the carpet bag – “Voilà, Madame – nous ne sommes pas si mechants, nous les Francais, comme vous voyez –“  Our luggage had been registered to Paris, and so we had no trouble about it from the time we left London.  On our triumphant return from this dreaded expedition we walked out and saw the Place de la Concorde and the Seine, but it was too late to do more.

This morning, Friday, we went to the Gallery of the Louvre, directly opposite this Hôtel, where we wandered till after three o’clk through the gorgeous halls of Egyptian and Grecian art – and the hall of Apollo to the paintings.  How superb! 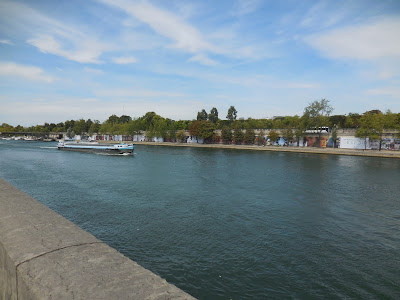 I have not yet begun upon the drawings – which I intend to explore tomorrow.  We had to come out to dine, and then we walked through the Place du Carousel and the Arc de triomphe – out to the Seine.  The sun was setting in a Rosy glow, changing the whole façade of the Tuilleries and of the Louvre into pink topaz, and the beautiful arches of the bridges were so reflected in the calm water that the answering arches made lovely globes – softened by evening haze into dreams.  The stately palaces on one side and the lofty stone buildings on the other, with the far vistas at each extremity of the view made a scene I have never before beheld.

In the east court of the Tuilleries, the Imperial Guard in blue, turquoise blue; with helmets bright as gold were exercising – and the Emperor was within the Palace.

Posted by Barbara Joy Cooley at 4:25 AM