A cool museum on a hot day

August 3, 2018 -- The day was warming early, so I departed early, hoping to have time to relax and cool down before my friends arrived at the wine museum yesterday.

I walked up the rue de Lourmel, soaking in the old, unpretentious 15th arrondissement charm which Lourmel still exudes.

A woman and her little girl stopped me at the rue Rouelle intersection.  I could see her bracing herself, facing the need to ask for directions in French.  I sensed that she was an American tourist, so I said, "You speak English?" after she'd stopped me with an "Escusez-moi."  She smiled and relaxed immediately.  She asked me where the Hotel Adagio was.  I knew exactly, and told her to turn right on rue du Theatre, the next corner, and keep going until she was almost at the river.

I am frequently stopped by people who need directions.  Usually, they are French speakers.  This was the first American who stopped me in a long time.  I wonder why more francophones ask me for help than do anglophones?

At the boulevard de Grenelle, I crossed to the northeast side to stay in the shade.  As I passed the big Castorama hardware and housewares store, I peered through the windows to get an idea of its size.  Yes, this seems like a big and useful store that is capable of filling the void that Zola Color left when it was replaced by Boulanger two years ago.

I crossed the Seine on the double-decker Pont de Bir Hakeim.  No wedding photos were being made that early in the day, but surely there would be some in the afternoon.

At last I reached the bottom of the hill in the 16th arrondissement.  The wine museum was straight ahead on the Square Charles Dickens, at the end of the rue des Eaux (street of the waters).  Balzac's house was up the hill, slightly to my left.

In French, I greeted the young man in the arched entryway to the museum and told him that I was waiting for friends.  He graciously invited me inside and showed me to a seat in the wine tasting room, which was empty at that early hour.  I waited for about 20 minutes, just the right amount of time to cool down from the walk.

My four friends arrived and we had a great time touring the museum.  When we came upon some plaques with the French lyrics for old drinking songs about wine, three of us (the women) sang them, making up the melodies as we went along.  The museum managers, if they could hear us, were probably wondering if we'd already been drinking.  But we had not; we just know how to have a good time.

I recommend this museum because it is well organized and informative.  The collections it houses are interesting, and the ambiance of an ancient wine cellar is perfect.  Yes, mendicant monks of the Minims order carved the caverns and stored wine there starting in the 15th Century, and continuing right up to the Revolution, when their monastery was destroyed.  Then limestone for construction of Paris buildings was mined there.

Here are some photos from this cool museum: 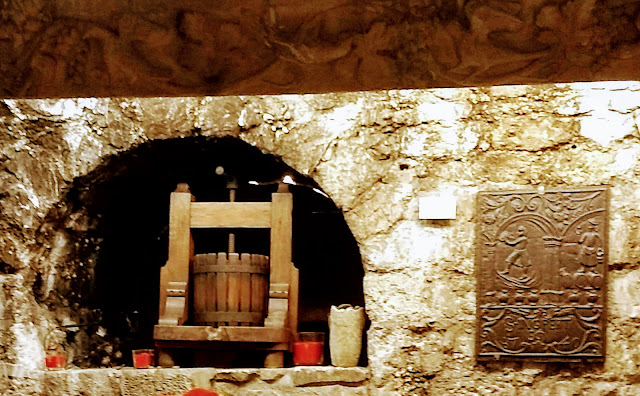 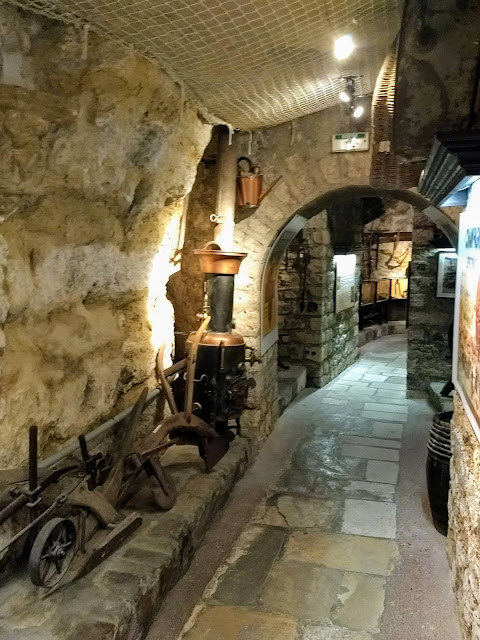 If you can read French, do not get the museum's English audio guide.  Its narrator is a bored young American man, and my, does he ever sound bored!  He also said "copper" instead of "cooper" when speaking of the one who makes barrels; that annoyed me.

After the tour, we were offered a glass of wine, which comes with the price of a ticket (13.50 euros).  We sat around talking and savoring the wine for an hour.  When it was time to walk home, I opted to walk along the Ile aux Cygnes with my friends, even though the route was longer.  I showed my friends how to reach the end of the Ile at the Pont de Bir Hakeim, where one bride and groom were being photographed.  We continued along the leafy way on that island, which must be a few degrees cooler than the streets.  We said our goodbyes and went our separate ways at the Statue of Liberty on the Pont de Grenelle.

I slipped into the Beaugrenelle mall for a couple blocks of air-conditioned walking.  The rest of the route was desert-hot, all the way to the Thomas cheese shop on the rue du Commerce where I bought fresh milk for my morning coffee.  Then at last I was home.

In the evening, Tom wanted to go to La Villa Corse, on the Boulevard de Grenelle, because we remembered dining there in the deadly heat wave of 2003, when that restaurant turned on its air conditioning.  Temperatures reached 104 degrees F in 2003.  Yesterday's temperature only went up to 93 degrees, with low humidity.

The restaurant's air conditioning was not on.  Somehow, we felt okay, sitting at a table in the noisy open window.  The food was good (sea bass and vegetables), but not particularly outstanding.  The shared dessert was beautiful and delicious.  But the restaurant was too expensive for what it was; the value was not great and the menu was quite limited.  So that's why only one other couple was dining there!

Tom walked me back to the rue du Commerce after dinner, and then he went for an evening walk, solo.  He'd had no exercise all day; he was not interested in going to the wine museum.  He'd just been sitting at the computer, working on the latest Norton textbook.  Tom is disciplined.

Now we are facing two more days of this second heat wave of the summer.  Hopefully we will get some relief from the heat on Saturday evening.  We know how to keep the apartment cool, even without air conditioning, and the humidity here is nothing like Florida's.  The temperatures drop into the 60s in the wee hours, so we begin each day, knowing that we will be fine.

Posted by Barbara Joy Cooley at 4:41 AM