August 23, 2018 -- Every night is a party on the Champ de Mars.  The party is peaceful and festive.  The partiers come from all over the world.  Those who are picnicking on the grass are mostly young adults, but some families with kids are there, too, especially now that the sun is setting earlier, and the first hourly twinkling of tower lights occurs at 9PM instead of 10.

I'd say it is all legal, but technically it isn't.  The rule prohibiting the consumption of alcohol in the Champ is roundly ignored and unenforced.  The undocumented immigrants who illegally sell Eiffel tower trinkets during the day are selling beer, wine, and champagne from ice buckets in the evening.  They work hard.

Several days ago on the subway, when we were coming back from the far reaches of line 10, a man boarded with two large shopping bags full of 6-packs of Heineken beer.  He proceeded to unpack them so that he had loose bottles separated here and there by pieces of cardboard from the packs he tore up.  By the time he disembarked at the Motte-Piquet station (near the Champ de Mars), he was ready to add ice to the bags and sell some beer. 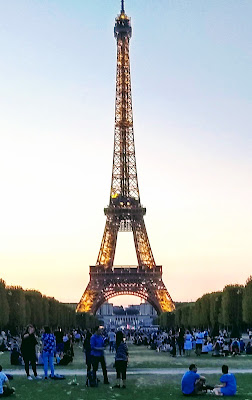 Obviously, beer prices are cheaper out on the edges of Paris than in the middle, where the Eiffel Tower is.  This young man was maximizing his profit margin.

I have different feelings about the illegal selling of the Eiffel Tower trinkets as opposed to the alcoholic drinks, although I'd never buy either on the Champ.

When these men sell the tower trinkets illegally, they are directly competing with the legal souvenir shops located in the areas all around the Champ de Mars and Trocadero.  The owners/managers of the souvenir shops pay lots of taxes and have many expenses related to their legal shops.  The illegal selling of those trinkets hurts these legitimate shopkeepers.  I do not approve of the illegal selling of those trinkets on the Champ de Mars.

The alcoholic drinks on ice are another matter.  There is nobody legally selling these ready-to-consume beverages on the Champ, but there is obviously a huge demand for them.  A few people who plan ahead bring their picnic hampers with them, fully stocked.  But most people on the Champ, especially in the evening, have been out and about elsewhere during the day.  In the evening, they're tired and they rest on the grass, waiting for the Tower's light show.

The ban on drinking there is not enforced.  People want these beverages.  The vendors add value by icing the drinks and having them readily available.  Therefore I approve of this activity.  A need/desire is being met.  Local stores benefit, if anything, when the vendors sell out; they go to the nearest Monoprix, Franprix, Champion, or Carrefour and re-stock.

The next day, early in the morning, especially on the lawn up close to the tower, you can see amazing quantities of empty bottles and cans that the partiers leave behind.  These people were thirsty!  Trash is piled like small mountains around the full receptacles.  The well-equipped "little green men" are out in force in the early morn, picking up, sorting, and disposing of the refuse that is scattered on the lawn and piled up in small mountains.

In spite of the alcohol they consume, the nightly revelers generally remain harmless and peaceful.  Rarely do we see out-of-control drunks on the Champ.  Party on!

We'd had a long day working at the computers, and when we were done, we realized that at the end of the day, temperatures had crept back up into the mid-eighties F.  So I reserved, put on a sundress, and we walked to Pietro Commerce, our local air conditioned Italian restaurant.  We dined on pizza, and asked for a box for the leftovers.  No problem.  Then we shared a baba au rhum for dessert.

After dinner, we walked up to the Champ after depositing the leftovers at home, arriving just in time to see the tower twinkle again.  We stood in the middle for a few minutes, right in front of the Peace Pavilion, and I made another video for you, so you can see what the party is like.  The twinkling lights start after the first 20 seconds or so.

Posted by Barbara Joy Cooley at 3:26 AM