The last night of the heat wave

We trudged up the Rue du Theatre in almost unbearable 100-degree heat, through air infused with some bad ozone.  When we were crossing the last street, approaching the front door of our destination, we were greeted by two delightful homemade signs -- one announcing "salle climatisée" and the other, "air conditioning."  The same thing.

This is not the kind of in-your-face over-air-conditioning that we get in Florida, and that's fine.  This Parisian style air conditioning really does just "condition" the air; it does not chill it.  Parisian air conditioning, done right, makes the dinner hour bearable, that's all.

After a warm welcome, we were seated at our favorite table in L'Atypic, a truly nice restaurant on the Rue du Theatre, just a block or two from the Seine.  We've been dining at that location for almost 20 years, but it used to be a place called Le Bayadere.  It has been L'Atypic for perhaps 10 years.

We started by sharing a very small order of crab ravioli served in a thin broth, Thai style.  Then Tom indulged in a beautiful, layered beef tournedos dish that included some foie gras and polenta.  I had duck breast slices, served with very light puréed sweet potatoes.

For desert, we shared a chocolate croquant with vanilla ice cream.  Tom gets the ice cream, I get most of the chocolate concoction.

The dinner was delicious, but probably overpriced.  Still, it was nice to dine in comfort.

After the repast, we walked home slowly.  The heat wasn't as bad, but it had not lifted.  The promised thunderstorm never arrived.  The air in the apartment was cooler than outside, and definitely less polluted, due to precautions and efforts I'd made during the day.

After sleeping for a bit, I arose after midnight and opened the windows.  The next time I awakened, around 5AM, cool air was blowing through the apartment.  It is still cool, as I write this in mid-morning.  The heat wave is over.  It was one week of discomfort, reminding me a little too much of the week after Hurricane Irma in Florida, when we had no electricity.

We can now enjoy a normal life in Paris. 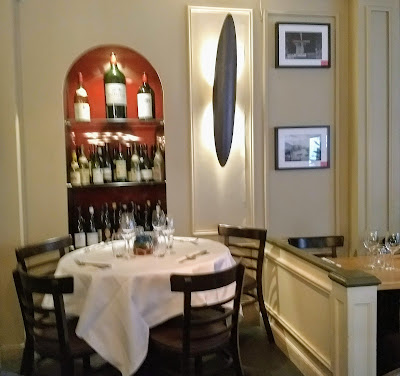 Posted by Barbara Joy Cooley at 12:23 AM