August 11, 2018 -- The metro is no longer an inferno.  Several days of normal temperatures have allowed the subway to cool.  For the first time this summer, I included it in our plans for yesterday.  Line 8, which takes a long, arching route through Paris -- from the left bank, southwest corner, north through the middle of the right bank, and down through the left bank again, on the southeast side, clear out of the city, into the suburb of Creteil.  Whew!

Wikipedia calls Line 8's route "parabolic."  Of course, Wikipedia uses that in the mathematical/geometrical sense of the word, meaning is it like a parabola, "plane curve which is mirror-symmetrical and is approximately U-shaped."

But I like to imagine Line 8's parabolic nature in the other sense of the word:  of or expressed in parables.  Line 8 is so long; it goes to many places.  People can tell stories about these places.  I can tell some of those stories.  On another day, I shall, and I shall try to tell some of them as parables.

After disembarking at the Bastille station (now you know the stories about the Bastille, don't you!), I briefly studied the map of the many exits before selecting ours.  We emerged from the underground not far from the modern Opera house.  Rounding the corner at the Opera and continuing past the big old Quinze Vingts National Opthalmology Hospital (founded in 1260),  we reached the beginning of our first tour of the day, a walk down the Promenade Plantée.

The first Parisian conversion of former elevated train tracks to leafy green walkways suitable for a promenade at any time of day, the Promenade Plantée has undergone a conversion in recent years.  As originally designed, it was high maintenance and thirsty.  Now the gardeners are letting it go a bit more natural, so the maintenance is not so overwhelming and water is not wasted.

The entire Promenade is looking good these days, and it feels safer than it did several years ago.

When we reached the of the Promenade at the Jardin de Reuilly, we continued on the Allée Vivaldi.  This area of modern medium-rise housing is also looking good, and feeling safer than it did several years ago.  The leadership of the 12th arrondissement is doing a good job!

I flagged down a taxi at the bus stop on Avenue Daumesnil.  (Note: you cannot flag down a taxi just anywhere in Paris.  You must do so in a place where there is room for the taxi to pull over safely, like at a bus stop.  That's why taxi stands are good to find -- but the taxi stands are too few.)

I asked the driver to take us to the Cour St. Emilion, next to the Parc de Bercy.  From years past, we know the walk between the Allée Vivaldi and the Parc de Bercy is not too long, but it is somewhat unpleasant because of the many railroad tracks leading to the Gare de Lyon.  There is no metro easily connecting the two parts of the 12th arrondissement separated by these tracks. 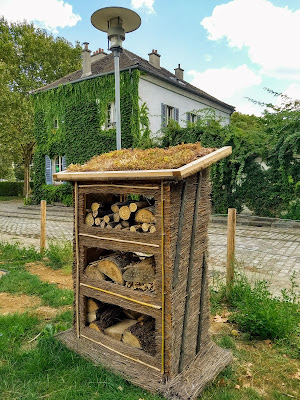 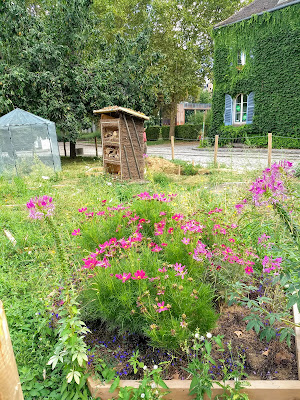 The driver took us up to the Place Félix Eboué, which has an elegant fountain with lions spouting water, and around to the Rue Taine, where a colorful Friday street market was happening.  We'd not seen that before.

In a few minutes, we'd passed through the tunnel under the tracks, around the back side of the Notre Dame de la Nativité de Bercy church, and around to the far corner behind the Cour St. Emilion.  This little cobbled street of small, stone, former wine warehouses is now a pedestrian-only delight of shops, a movie theatre, and cute restaurants with plenty of outdoor seating. Cab fare was about 7 euros, and it was well worth it. 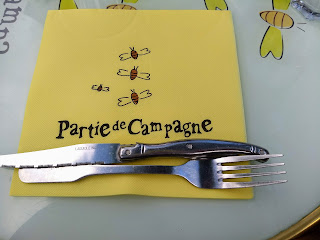 We enjoyed a casual lunch at a place called Partie de Campagne, which specializes in food from the Aubrac region.  Curiously, although images of bees were a part of the resto's decor, it seemed that all the bee decorations on the Lagioule steak knives had been removed.  Weird.

Fortified, we were ready for a walk through the magnificent Parc Bercy after lunch.  Because wine warehouse district trees and cobbled pathways were retained when this park was designed, the place has an other-worldly, old fashioned ambiance about it even though the park only dates back to the 1990s.  Tree lovers admire the trees, garden enthusiasts love the Yitzhak Rabin garden, kids like the playground, and flaneurs adore the walkways.

An earthen wall blocks traffic noise from the quai and provides a place for a human-made waterfall.

The park is bi-sected by the Rue Joseph Kessel.  A steep and long set of steps lead up to a pedestrian bridge over the street, to connect the two sides of the park.  Those challenged by knee problems, like me, can opt to go around those steps by exiting the park and walking for a short distance on the pedestrianized Rue de l'Ambroisie and Rue Paul Belmondo, then re-entering the park.  That worked for me.  I can go up stairs without much trouble, but going down stairs is awful for my right knee.  That's one of the reasons I've avoided the metro for much of this summer.

After leaving the park, we walked down toward the river along a lovely allée of trees parallel to the imposing modern building that houses the ministry of the economy, finance, and industry.  Then we descended to the riverbank, where houseboats are moored and outdoor cafés have sprouted. There is evidence of nightlife in this area, but it was all asleep when we were walking.

The Pont de Charles de Gaulle led us back to the left bank, right in front of the busy Gare D'Austerlitz.  I admired the immensely wide sidewalks, two-lane dedicated bike path, and minimal traffic lanes on this modern bridge that connects the Gare de Lyon neighborhood with that of the Gare D'Austerlitz. 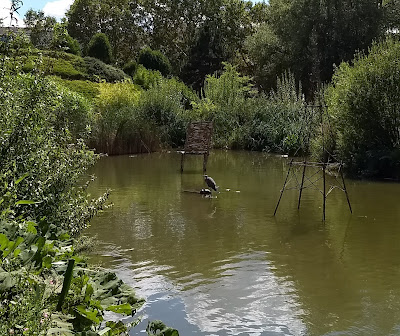 We used the metro entrance inside the Gare, which was a mistake.  There were far too many steps.  We should have walked past the construction area outside, and over to the metro entrance by the McDonalds next to the entrance to the Jardin des Plantes.  Live and learn.

Line 10 of the metro took us home quickly, in almost a straight line route, compared to the parabolic Line 8.

We did nothing special for dinner, but I must tell you about Thursday evening's dinner, which was special.  In perusing the possibilities in lafourchette.com, I came upon an interesting page for L'Archelle, a restaurant on Avenue Segur, not far from Félix, where we dined on July 16.

Unlike Félix, L'Archelle was open during this holiday week (Feast of the Assumption is tomorrow).  Based on the reviews I'd read, I expected the place to be merely good. But it was way better than that.

We shared an appetizer of fine foie gras, served with a port sauce.  Then came our main courses:  for me, lobster and risotto made of rice vénéré -- a whole grain rice that is black, and smells like sandalwood -- and for Tom, bouillabaisse.  Incredibly, Tom said he didn't think he'd ever had bouillabaisse!  How is that possible -- my husband who knows so much about French food had never had bouillabaisse?  Anyway, the bouillabaisse at L'Archelle is beautifully served, as you can see below.  All of the dishes were absolutely delicious.

The greeting we received from the server had been awkward and ungracious.  We made up for it by making a point of thanking the chef profusely for such a fine dinner as we left.  He was pleased.

Posted by Barbara Joy Cooley at 1:44 AM