August 15, 2018 -- Surprise!  Paris has artesian wells.  In the 19th century, as the city was expanding, engineer Georges Mulot was hired to find these springs with water under pressure, and to dig wells so that the water could serve the needs of residents and businesses of the left bank.  He started work in the 1830s and, after 7 years and 10 months of efforts, finally dug a successful well in 1841.  The location was not the most savory:  the courtyard of the Grenelle slaughterhouse.

A tall font in the form of a column with three tiers was then constructed in the middle of the Place Breteuil, where the statue of Pasteur now stands.  The artesian well's font fed a nearby water tower (chateau d'eau) that was part of the city's water system.

Georges Mulot went on to dig several more artesian wells in the Paris region and in Algeria.  Later, when the Grenelle slaughterhouse was gone and the font had been replaced by the Pasteur statue -- about 1905 -- the new residential neighborhood that was built on the site included a fountain in the middle, on a square named in honor of Georges Mulot.  The neighborhood around the square is a quiet network of streets consisting entirely of attractive Haussmannian apartment buildings like the one below. 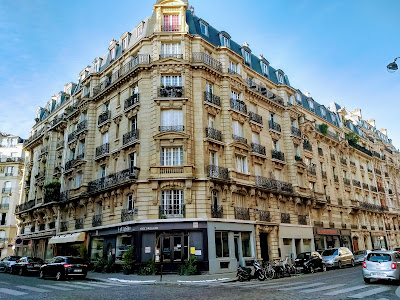 For a long time now, I've known that this neighborhood around and including the Place Georges Mulot is where I would choose to live if I lived in Paris.   The neighborhood has everything: beauty, peace, quiet, a couple small groceries, bigger groceries not far away, the Avenue de Saxe outdoor market not far away, a lovely neighborhood park at the southern end of the Avenue Breteuil, a few good, small restaurants, a butcher shop, a wine store, a bakery nearby, a private library, an extensive taxi stand on the Place Breteuil, the Segur and Sevres-Lecourbe metro stations (lines 10 and 6) adjacent, a reasonable air-conditioned hotel (Bailli de Suffren -- for guests) on Avenue Suffren, and more. 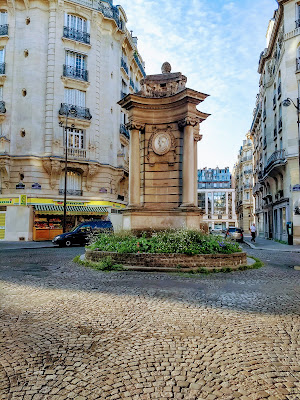 Many people think this neighborhood is in the ritzy 7th arrondissement.  It is not; it is in the populous and large15th.  This part of the 15th sticks like a thumb out of the arrondissement's eastern side, surrounded by the 7th, 6th, and 14th arrondissements.  It also includes the Montparnasse Tower and the sprawling and ancient Necker children's hospital complex.

Being in the 15th is important to property owners because taxes are lower than they are in the 6th or 7th.  I'm not sure about the 14th.

The beginning of Rue Lecourbe is just across the Boulevard Garibaldi from the Georges Mulot neighborhood.  Tom and I both have come to appreciate and be charmed by the mix of shops and restaurants on the long stretch of the wide, busy Rue Lecourbe from this beginning to the town hall of the 15th arrondissement.

Off the northwest side of the neighborhood, off of the Avenue de Suffren, are globally important institutions:  UNESCO and the European Space Agency.  This morning I examined the photographic exhibition on the fence along the  Suffen side of UNESCO.  It is part of the Hard Rain Project, about efforts to achieve a sustainable Earth (named for the Bob Dylan song, It's a Hard Rain Gonna Fall).  See a film about the ambitious project here.

When you're in the Georges Mulot neighborhood, you don't have a clue that the enormous Necker children's hospital is not far away.  The same is true of the Pasteur Institute.  You also don't see any sign to indicate that this was formerly the Grenelle slaughterhouse site.


In 1810, Napoleon called for the creation of five slaughterhouses just outside the Paris boundaries because. At that time he banished the numerous "tueries" (open areas where animals were killed) and  forbade the driving of live animals through the city streets.  He did this not just for public health reasons. The butchers' association at one time was a powerful, profitable, and somewhat violent group. Napoleon had to divide and conquer.

His 1810 decree effectively albeit indirectly put the butchers who killed the animals and the butchers who cut up and processed the meat into separate groups.  The latter group became more divided when some specialized in sausages and charcuterie, others in poultry, still others in horsemeat, beef, or pork.

Personal descriptions of the early tueries are a nauseating read.  A long time ago, the tueries could be almost anywhere -- at the butcher's convenience.  Animals could be killed in the streets,or on the sidewalks; blood flowed in the gutters.  People complained about blood sticking all over their shoes.  The butchers then tried to organize specific areas for tueries.  But the real solution was to construct engineered slaughterhouses like those at Grenelle (now the Place Georges Mulot neighborhood), Ivry (later called Villejuif (near the Boulevard de l'Hopital), Montmartre (now the Jacques Decour high school on Avenue Trudaine), Popincourt - later called Menilmontant (at the rues Parmentier and Saint-Maur -- the only Kosher abattoir), and Du Roule (on the Avenue Miromesnil).  As the city grew to absorb these locations, new abattoirs were constructed at Vaugirard (now Parc Georges Brassens) and La Villette (now Parc de la Villette).

After reading a number of items on this subject, I opted to return to my normal fish-and-veggies default dinner last night.  We dined at Axuria on the Avenue Félix Faure, where I had sole meuniere with mixed vegetables and puréed potatoes, which I shared with Tom.  We had started with sharing an order of 9 escargots.  Tom's main course was a nice piece of pork, with veggies and Grenaille potatoes.  All of the food would have been good if it had been hot enough, which it was not.  Oh well.  We will try Axuria again next year, hoping that the problem(s) will be corrected.

One thing was heavenly perfection at Axuria:  the soufflé Grand Marnier.  Aaaahhh.

Posted by Barbara Joy Cooley at 5:49 AM

Great introduction to a quartier I hadn't been aware of! Hope you get to live there...or hope I do!