The melange of the 15th

The church of St. Cristophe de Javel is an unusual melange of modern architecture and gothic fantasy.  An early use of some concrete pre-fab construction, the church was built in the 1920s, when my parents were born.  The construction of the presbytery (home of the curate) and bell tower came first, in the early 20s, and the rest of the parish church was built in the late 20s.  The first benediction was said there in October of 1930. 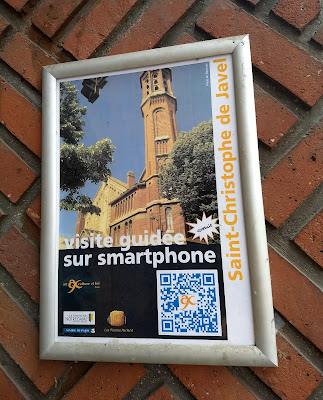 We've admired the unusual church for years. In the 90's, its façade was cleaned and restored, the renovation of the chapel of the virgin happened in 2004, and the Art Nouveau stained glass windows were restored in 2015.

When this church was conceived, the area around it was replete with factories, especially those that produced chemical products.  This is where bleach was invented, and so it is called Eau de Javel in French.  My friend W didn't know this, and so she could not find bleach in the grocery last month.  I was with her when she went back to the store, and I showed her the Eau de Javel bottles near the laundry detergent.  Their labels didn't say "bleach" anywhere.

A huge Citroën automobile factory was also near the site of the church.  That factory departed for the suburbs decades ago, and the site was turned into a grand park for families and garden enthusiasts to enjoy.

We walked past the church on our way to the park yesterday afternoon.  The weather was warmer than the preceding days and warmer than today.  Because the humidity was low and a breeze wafted, we enjoyed the warmth of the sun and the temps in the mid-80s.

Our walk in the Parc Andre Citroën began with the shady, color-themed gardens along the northeast side.  New exercise equipment has been installed at the edge of two gardens.  Tom checked it out. 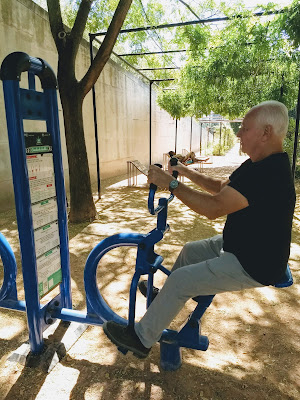 We crossed the expansive central lawn where the hot air balloon is stationed to the gardens tucked into the western corner of the park, and then strolled along the southern edge which was somewhat shaded by adjacent large modern office buildings made of glass and steel.

The park was built with too much infrastructure and too many water features to be practically maintained, so the canal-like water feature along the southern edge of the park was empty and in disarray.  The logical thing to do here is fill it with dirt and plant native vegetation.

The dancing waters fountain next to the greenhouse at the southeastern end of the park was operating.  Kids are allowed to play in this fountain during hot weather.  They were there in droves.  What a happy sight and sound! (video below)

We had refreshments at La Buvette du Parc, a concession near the dancing waters and not far from the old factory entrance on the southeast side of the park.  Then we were ready for the long walk home along the Rue St. Charles, the Rue de la Convention, and the Avenue Félix Faure.

We peeked into the open gate of the old Grenelle cemetery, and later paused on a bench while we examined one of those ubiquitous plaques that say "so-and-so lived here in his building from 0000 to 0000," where "so-and-so" is usually the name of some famous person.  In this case, the plaque said "Jerome Bozel, Plumber, lived in this building 1972 to 1979."  It is a joke, and, on the internet, I learned that there are several plaques exactly like this one affixed to buildings in various parts of Paris. 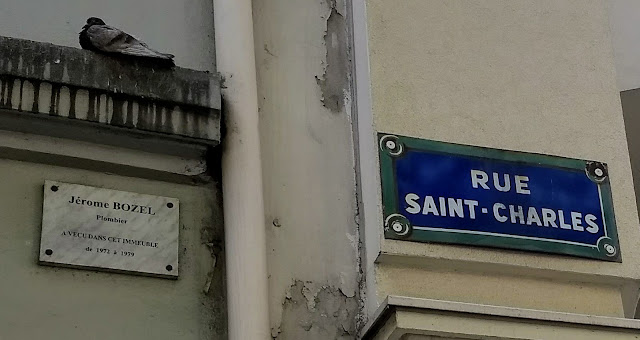 Even though our walk was a 5-mile loop through the 15th, we'd only covered a fraction of this mighty arrondissement -- the largest of the 20 Paris districts.
Rest assured, there is more to come.

Posted by Barbara Joy Cooley at 2:57 AM