An English garden in Paris

August 9, 2018 -- In 1778, as Britain and the American colonies were at war, Philippe D'Orléans, the Duke of Chartres, decided to create a public park in Paris.  His good friend, who would later be George IV, King of England, influenced the design of the park.  And so Parc Monceau was created as an English garden, not a traditionally French one.

We claimed a taxi yesterday afternoon at Le Motte Picquet station and asked the driver to take us there, via the Rue Rembrandt, in the 8th arrondissement.  I thought the route the driver took was not very direct, but then I didn't care because I was enjoying the ride and the views.

When the taxi stopped at our destination, Tom asked the driver for a little lesson in how to pronounce "Rembrandt" in French (which is very unlike the way it sounds in English).

We began our walking tour of the park, noting how brown it was.  Especially in the north part of the city, Paris is experiencing a drought.  Today, fortunately, rain has arrived, in a gentle fashion.

In Googling what I've written about this park in the past, I found this complex idea that I had in my blog entry for September 5, 2011, for a garden-based tour of Paris:


It occurred to me that with fine gardens at each end of line 10 of the metro – the Albert Kahn Gardens on the west end, and the Jardin des Plantes on the east end – I could design a plan for garden loving tourists to indulge in a whole day of sightseeing along the line 10’s route.
The tourists could first stay in the Hotel des Grandes Ecoles with its garden-like setting in the 5th arrondissement, and start the day at the Jardin des Plantes.

Then they’d get on the line 10 at the Austerlitz station and take the metro to the Javel-André Citroën stop, where they’d exit and visit the several gardens of along the northeast side of the Parc André Citroën.

After that, they’d hop back on the line 10 and take it to the end of the line at Boulogne Pont St. Cloud, where they’d exit and have a quick lunch on the generous terrace of the Brasserie Jean-Baptiste, followed by a visit to the Albert Kahn Gardens.

Of course, they could then take the line 10 metro right back to Cardinal Lemoine, near their hotel.

Another day of their tour might include a guided visit of the Luxembourg Gardens, where they’d visit the park’s gardens but also learn about the Senate’s apiary and fruit orchard, and they’d have a private tour of the Luxembourg’s greenhouses which are not normally open to the public.
They could then go to the garden at the Rodin Museum for tea.

Another day could involve a visit to Parc Floral, in the Bois de Vincennes, then the Jardin Yitzhak Rabin at the Parc Bercy, and a stroll along the Promenade Plantée  from the Jardin de Reuilly to the Bastille Opera.  If there’s time that day, they could also squeeze in an evening stroll at the Jardin du Palais Royal.

Another day would take them to the Parc Monceau in the 8tharrondissement, followed by the Jardins du Ranelagh in the 16th, a visit to the Marmottan museum, and finally the Jardin des Poêtes and the greenhouses of the Jardin des Serres d’Auteuil in the Bois de Boulogne.

And then they’d probably be so sick and tired of seeing beautiful gardens that they’d want to tour the Catacombs or the Sewers of Paris.  Either or both could be arranged. 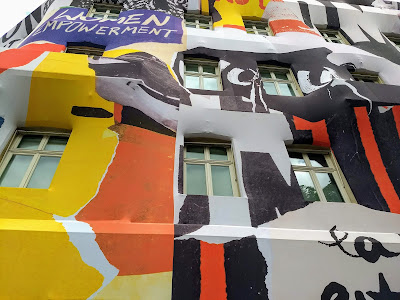 Yesterday's adventures began in the morning with a trip to La Poste where we mailed our Florida primary ballots.  We never miss a chance to vote -- ever.  So far, two people have asked me to email them a pdf of my completed ballot, so they don't have to research the more obscure items on it.

Then it was off to the grocery to replenish supplies.  I think I love the local FranPrix grocery.  Tom finished up our errands with a trip to the Eric Kayser bakery, where he bought a baguette for him and a rustique (small loaf of country whole-wheat sourdough bread) for me.  The rustique makes the best toast you can imagine. 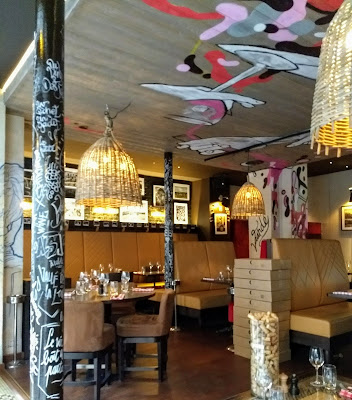 Once we'd finished our tour of Parc Monceau, we walked downhill to go toward home -- down the Rue Courcelles, Avenue Myron Herrick, Avenue Franklin Delano Roosevelt, around the Rond Point on the Champs Elysées, down the Avenue Montaigne, to the Place de l'Alma, where we circumvented one corner to get to the George V, and inviting bistro with lots of outdoor tables.

We indulged in afternoon refreshments at the George V bistro (no connection to the George V hotel) because we'd skipped lunch.  Noting that a taxi stand stood right in front of the bistro, we decided to take a cab home to preserve some stamina for an evening walk to dinner and back.

I'd reserved at a new place on the Avenue Bosquet, called Les 2 Gros.  Yes, the name is gross but the atmosphere was convivial and welcoming, as was the service.  The dinner was casual and excellent (ribs for two, with salad).  There was no problem with getting a box for the leftovers. 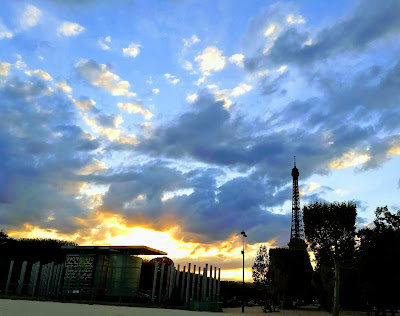 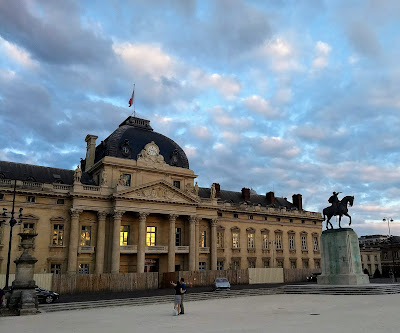 As we strolled home past the Champ de Mars, the evening sky put on quite a show.  Voila!

Posted by Barbara Joy Cooley at 1:48 AM