A life without screens

August 28, 2018 -- We have no window screens in Paris.  Generally, we do not need them because there are so few flying insects.  This year, however -- for the first time -- we've had a couple bees who routinely fly into our kitchen.  I like to think that this is because Parisians are installing bee hives on roofs at record numbers, and because small community gardens are being encouraged everywhere.

The City of Paris does control the rate at which bee hives are installed.  Keeping a balance between new gardens and new hives is important, evidently.

Perhaps someone has received permission to install a hive near us.  Or perhaps the bees have been attracted by the little dollops of fruit preserves that my husband leaves on the counter after he has a snack.  Bees like these fruit preserves; Tom is careful to select preserves that have more fruit than sugar -- only the best!

I don't like sweet food as much as Tom does, so I refer to his preserves as "that sticky, gooey red stuff."  But the bees sure do like it.  They're in Tom's camp.

I felt sympathy for the bees this summer.  I let them eat all the little dollops of preserves until there were just some particles left, which I then cleaned off the countertop.

Tom has found that the best place to buy preserves near us is the Thomas Fromagerie.  What do preserves have to do with cheese?  Well, there are certain kinds of cheese that taste good with fruit preserves -- namely, chevre.  And both cheese and preserves are often consumed on French bread.

On our walks, we notice more and more little community gardens popping up in the sidewalks, in the dirt rectangles around the base of street trees.  You know the gardens are authorized when you see a little sign (issued by the City) that says so. 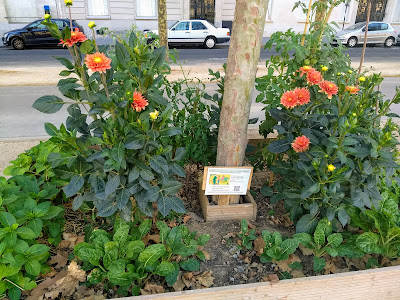 We don't see the increasing numbers of bee hives on roofs, but we read about them.  Now they are on top of the famous department store, Galeries Lafayette, as part of a thick roof garden.  The New York Times ran an article recently about the bee hive phenomenon on Paris roofs.

Honey is a sweet food that I do use; I put it in my vinaigrettes.  We often have salad for lunch, and I never buy "industrial" salad dressings in bottles. I make my own.  In my opinion, a slight drizzle of honey is needed to take the edge off the vinegar.

Consuming honey made with pollen from plants growing near you is supposed to boost your immune system.  So at home on Sanibel Island, where we live next to mangroves, I buy mangrove honey at the Sanibel-Captiva Conservation Foundation.  In Paris, I buy honey made from flower pollen.  The community gardens sprouting up everywhere generally contain flowers, with a few herbs and tomato plants mixed in.

Some restaurants will sell bottles of honey, preserves, or other items that they use in their cooking.  I've bought honey that way before.  Last night, we dined in a place that specializes in charcuterie; so the restaurant has a shop where their patés, terrines, and saucissons are sold.

We had planned to dine at Le Lutin dans le Jardin in the 6th arrondissement, but that restaurant had some kind of emergency and cancelled our reservation.  I learned of the cancellation while Tom was on a 5PM conference call with his publisher in New York.


So I promptly reserved at Arnaud Nicolas, a new resto named for a young man who specialized in charcuterie from the young age of 24.  He has supplied the restaurants of Alain Ducasse and others, and now at last has opened his own place on the Avenue de la Bourdonnais, in a sizeable space formerly occupied by a classic restaurant that specialized in foie gras.

The old foie gras place used to have a toaster at each table, including the tables out on the sidewalk!  It is important to have warm toast for your foie gras, in some people's opinions.

Gone are the toasters.  A sleek, new decor graces the restaurant, which is a little pricey.  We shared a delicious starter of poultry and foie gras terrine en croute with puréed onion confit on the side.  I had a beautiful and tasty main course of octopus, green beans and thin slices of saucisson.  Tom's fish, a cod with artichoke hearts, was a bit bland.  But the dessert that we shared, a baba au rhum, was scrumptious. 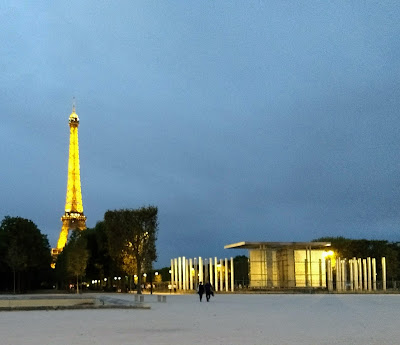 On the way home, as we crossed Rue Emile Deschanel, we looked up in time to see the Eiffel Tower twinkling for a few minutes.

I will be sad to leave it this year.

Posted by Barbara Joy Cooley at 3:11 AM