Taking care of a treasure

At last, the leadership of the 15th arrondissement is building up the will to improve the somewhat-neglected yet wonderful Île aux Cygnes, with its popular walkway, the Allée des Cygnes (Swan's Way).  After decades of what seemed like nobody taking responsibility for this iconic place, the 15th arrondissement's town hall is taking ownership.

While walking to Rue Lecourbe on Friday, I noticed a flyer posted on a light pole.  Its message was directed at the locals, urging them to vote to support the undertaking of a couple projects that would greatly improve the Île.

The beat-up park benches, particularly in the area near the Statue of Liberty, are being targeted for replacement in these proposals.  More poubelles (trash containers) would be installed to accommodate the waste from the many people who love to picnic on the Île.  The walkway itself would be restored, too. 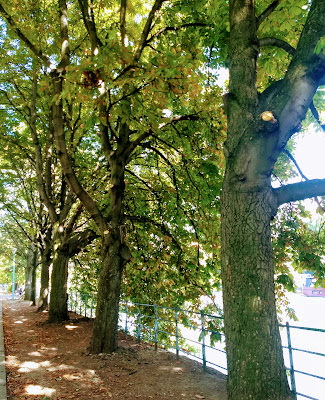 I am a frequent visitor of parks in the 15th, and I do believe much of the problem is simply that the Île is not maintained at anywhere near the same standards as places like Parc Saint Lambert, where the park benches are cleaned and painted regularly, litter is collected frequently, trash containers are emptied daily, and running water is available.  Much could be accomplished by simply adding the Île to the daily "to-do" list.

There have been a couple improvements to the Île in recent years: (1) the identification of the many trees and addition of educational signs about each type of tree, and (2) the installation of sports equipment in the sheltered area near the Statue of Liberty. 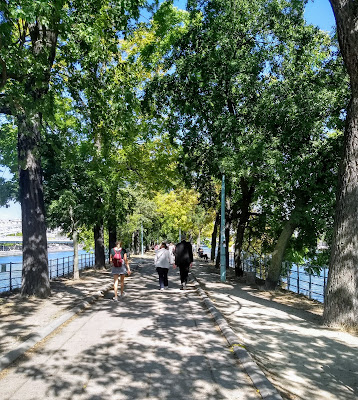 But it is never a good idea to add improvements where there is no plan for regular maintenance.  I just know that the 15th can do a much better job of taking care of the Île because the 15th does so very well with its other parks and public spaces.  Capital improvements alone will not do the trick; regular and attentive maintenance is a must.

Here's a translation of one of the 15th's web pages about the proposed improvements:

Created in 1825, the Ile aux Cygnes is nowadays a popular area for walkers, runners, and joggers. It stretches over 890 meters long, between the 15th and the 16th.  On its downstream end is the statue "The freedom guiding the people" of Auguste Bartholdi [the Statue of Liberty] and on its upstream end, it features the statue "La France Renaissante."  Remarkable for its biodiversity, it is home to nearly 70 different tree species and has become a refuge for many species living on the Seine [including a few swans]. In connection with the Emeriau-Zola District Council, the island has already been upgraded by the creation of an arboretum, the creation of a sports area, and the change of railings of the esplanade. But the main walkway, stairs, and furniture remain in a very old state and require extensive renovation. Given the addition of the Île aux Cygnes within the boundaries of the Seine banks protected under UNESCO, it is more important than ever to restore brilliance to this original and unusual space, as proposed by this project, which is estimated to cost 500,000 €.

Yes, indeed, the recent addition of the Île to the UNESCO world heritage site was an effective way to shame leaders into action, it seems.

You notice that the author of the paragraph refers to the Île location as "between the 15th and 16th"?  This attitude is at the root of the problem.  The Île is not BETWEEN the arrondissements; it is within the 15th, according to official maps and according to history; it was created to benefit the ports along the 15th arrondissement side of the river.  These are lucrative ports; they host many a European river cruise ship during Parisian sojourns.

Tom and I took a very slow stroll up and down the Île yesterday afternoon.  I took a small sketchbook with me and started a sketch of the apartment building near Radio France as Tom and I sat on a bench in a shady spot, looking over at the 16th arrondissement.  Lots of folks were out walking along the Seine on the Île; we were fortunate to snag a bench just as a photographer was packing up to leave it.


Posted by Barbara Joy Cooley at 1:53 AM