The unwitting experts in brunch

The Parisians in recent years have adopted the idea of "brunch" with enthusiasm, especially on Sundays.  Yes, they use the English word for it.  But in reality, I think they've had "brunch" ever since the croque madame and croque monsieur were invented.  According to Larousse Gastronomique, the croques' first recorded appearance on a Paris menu was in 1910.  Basically, a croque is a baked ham and cheese sandwich; the croque madame has a fried or poached egg added to it.  Some places add a little Bechamel sauce.

In classic brasseries and cafés, you can order a croque at breakfast time, or anytime throughout the day.  It is often served with fries or a little side salad, or both.  It is meant to be an affordable, satisfying meal.

At mid-day, we were walking our default route along the Avenue de la Motte-Picquet and the Boulevard de la Tour Maubourg while Maria the Cleaner was working in the apartment.  Tom needed to eat, and he wanted to do so quickly so that he could return to the apartment promptly at 1PM to send work to his NYC publisher, just as those New Yorkers were beginning to arrive at the office.

The croque is not only an affordable meal, it is also a fairly rapid one.  We settled into leather chairs at a table in the window of Le Centenaire, a classic brasserie on the Boulevard de la Tour Maubourg.  Without even thinking much about it, I ordered a croque madame and Tom ordered the croque monsieur.  The jolly server took our order, and when we asked for a big bottle of sparkling water, he joked, "Ah, champagne, et croques!"

The croques came with fries and a bit of salad.  I ate all of the salad and very few of the fries.  Fries have to be excellent for me to want to consume those calories.  Those fries were merely good.

The croques were perfect.  The cheese was Gruyere, and the bread was pain de mie, or soft, square bread -- as is typical of a classic croque.

We didn't eat the croques in entirety.  Tom slipped part of his croque into a plastic bag to take home.  He did this to avoid the jolly server's scolding him for not eating it all.  He stuffed the plastic bag into his shopping bag.

The server didn't scold me for not eating all of my croque, but he did inquire about why I didn't eat the fries.  I simply replied, "C'est bon, mais c'est beaucoup" with a smile and a shrug (it is good, but it is a lot).  He pretended to frown.

After walking almost 5 miles, we arrived back at the apartment at 1PM, well nourished and fueled for a few hours of work at the computers.  Then we relaxed and eventually walked down to A La Tour Eiffel, the café where we first dined in Paris in 1998.  I don't remember what we ate in 1998, but last night Tom had bass and veggies with potatoes, and I had perch and veggies with rice.  I gave my rice to Tom, who loves rice because he grew up in South Carolina.  Rice is a childhood comfort food for him.  I do like rice, but I especially enjoy seeing Tom enthusiastically eating rice.

The young woman who served us was as nice as can be.  She loved hearing that we first dined there in 1998, and that it was our first dinner in Paris.  She was probably a toddler in 1998.

We were home in time to see a beautiful sunset sky from our balcony.  Here are some photos from the evening: 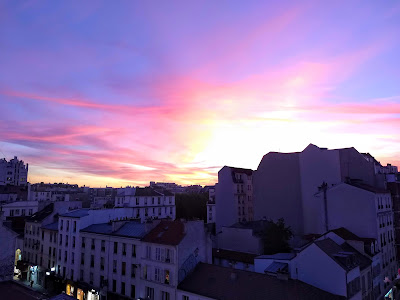 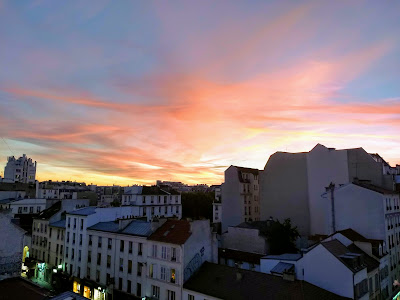 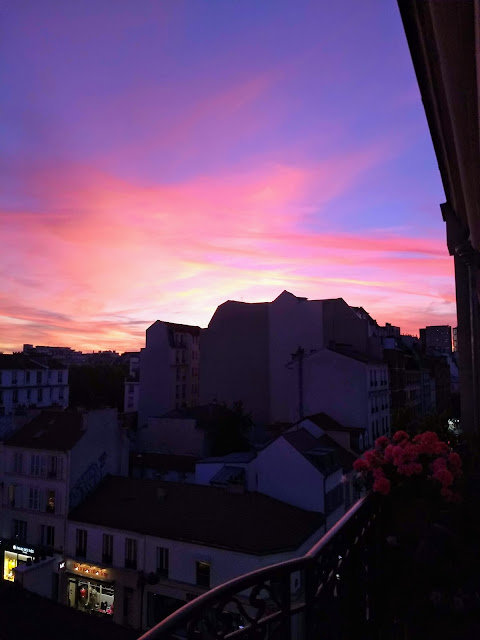 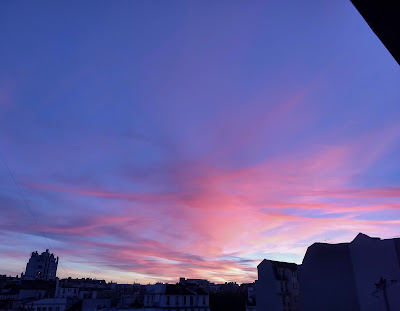 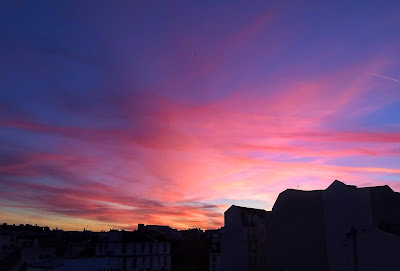 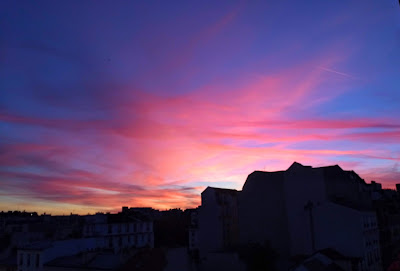 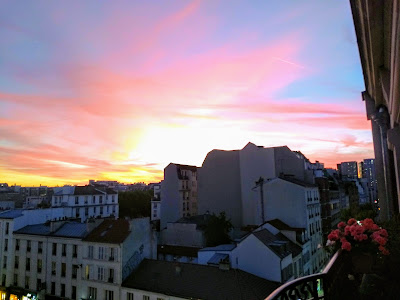 Posted by Barbara Joy Cooley at 2:49 AM