Here there be dragons

Bon Marché -- the famous Parisian department store -- surely it will have a nice stationery section, we thought.  Maybe we should continue our search for bookplates there?

So we hopped on the nearest metro and exited at Sevres-Babylone, right across from the Bon Marché entrance.
After a circuit through the entire store, we finally determined that the bookstore/stationery section was on the second floor in the main building.  The entire section was well organized, pleasant, and attractive.  But the stationery part had more interesting items than what we've seen in independent stationery stores so far.

The cover of Tom's book, Back to the Lake, has always featured the dragonfly in each edition.  Here's the latest cover, for the book coming out this year.  Ideally, we'd like to have bookplates that have a dragonfly image.

Bon Marché had two small note cards with envelopes with just such an image, as well as small notepads made of high quality paper (hand-made in Belgium) with dragonflies at the top.  Put some glue on the back, and these will be perfect bookplates.  So we bought the last two notecards and two notepads.  The search was really over at that point.

But we got into a conversation with the cashier at Bon Marché, and I explained what we were trying to do.  She was interested in Tom's book, and so she wanted to help with the hunt.  She suggested we also look at Rougier et Plé, an art supply store.  I looked up Rougier et Plé on my phone and found that the flagship store was not too far away, on the boulevard Saint Germain.  For the fun of it, we walked over there after we left the Grand Magasin, small shopping bag in hand.

I selected a series of small, medieval streets as a way of going to the boulevard.  Rue du Dragon has always been one of my favorites.  At last we were on the boulevard, and were soon shocked to see that The Mondrian, one of our longtime favorite brasseries, was gone.  I searched this morning and found that The Mondrian announced its closing in August 2018.  I'm sorry we missed the closing night party.

The vacant brasserie front now looks as though it was burned in a fire sometime during the cold winter, but that fire must have happened after The Mondrian closed.

My guess is that the inexpensive hotel that The Mondrian was in will also close to make way for a major renovation.  That location, on the corner of the Rue de Seine and the Boulevard Saint Germain, is ripe for a luxury boutique hotel.  That the very plain Welcome Hotel has lasted as long as it has in that prime spot is amazing.  On va voir . . . .

We continued up the boulevard, noting some positive changes along the way.  Finally we reached Rougier et Plé, on the northern side of the boulevard between the Odéon and Cluny metro stations.  This fine art supply store has other branches, including one not far from us on Rue Lecourbe, but this store on Boulevard Saint Germain is the main store, I believe.  It is an older building, and the store occupies three levels.  We enjoyed looking around there, and selected some self-adhesive labels with silver borders that could be used as bookplates, or as stick-on nametags at a party.

Now we have options.

We walked back to the Carrefour de l'Odéon to have refreshments at Les Editeurs -- for the second time this summer.  I think this handsome brasserie has become our new favorite brasserie in this neighborhood now that The Mondrian is gone.   We ordered a planche de charcuterie, which was really a late lunch.

While at Les Editeurs we witnessed some interesting interaction between a tow truck driver who was towing away two motorcycles from the Carrefour de l'Odéon.  The owner of one of the motorcycles, an expensive semi-covered BMW model,  was attempting to talk the driver out of towing his vehicle.  The owner was an elderly man who was in good shape.  With is longish gray hair swept back from his well-structured face, he had the look of an intellectual.  I wish we could have heard the discussion between him and the driver.  It went on for some time, while the driver awaited authorization to proceed.

After we'd paid our check, we went out and immediately flagged down a taxi in front of Les Editeurs.  We were able to relax and enjoy the view of the boulevards on the way home, where we relaxed more, until dinnertime.

We ventured out in the evening for another walk down the Avenue Félix Faure and Rue de la Convention to the Rue Saint Charles and the rue Sebastian Mercier, where we had a fine dinner at L'Ardoise du XV (the Blackboard of the Fifteenth).  We've probably dined there about eight times in the past few years, and each time the quality of the cuisine has been dependably fine.  Tom ordered the golden bream and I had duck breast, and we shared a small financier cake with orange sauce for dessert.

Here are some more photos from the day: 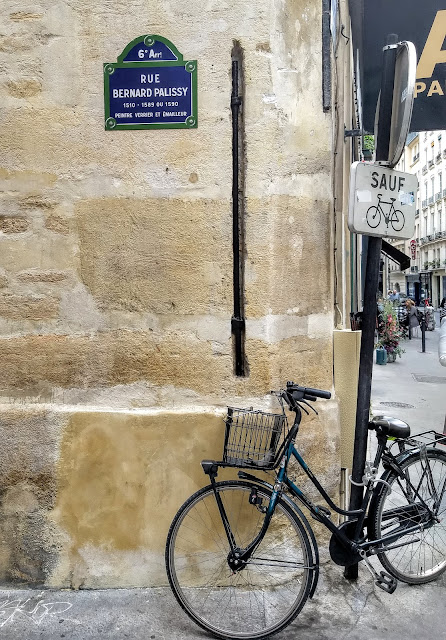 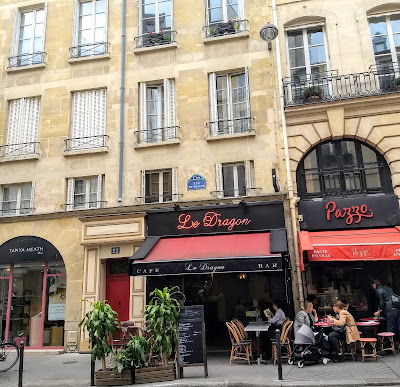 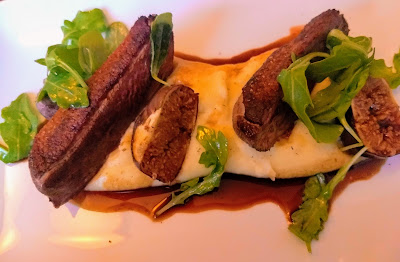 Posted by Barbara Joy Cooley at 3:31 AM