The restaurant, Le Damantin, is part of a hotel by the same name.  The hotel's web site states that this was a 19th-Century hôtel particulier (stately home) prior to its conversion into a hotel and spa.

To me, it does not look like a hôtel particulier; it looks like it was always a hotel. Anyway, it is a hotel now, rating a swanky 5 stars.

When I discovered Le Damantin on Lafourchette.com, I didn't think it was part of a hotel.  When we turned the corner at Rue Bayard, we saw no restaurant.  In fact, the hotel itself barely had any signage.

We entered the foyer, and I followed the sounds of clinking porcelain and flatware to find the restaurant inside.
I'd selected the restaurant because of its high ratings and reasonable prices.  That is not to say it was inexpensive; it is to say that in this neighborhood, where it is possible to spend over $200 per person on lunch at any one of several restaurants, Le Damantin is more digestable.  Literally.  My husband says that if he spent more than $400 on lunch for the two of us, he would have indigestion.  (The Damantin lunch cost us 80 euros total, with a 30 percent Lafourchette discount.)

The neighborhood of Le Damantin is the neighborhood of the Petit Palais and the Grand Palais, in the 8th arrondissement, by the Seine.  The fashionable Avenue de Montaigne is nearby;  that avenue is home to some of the most highly regarded clothing designers' glamorous boutiques. 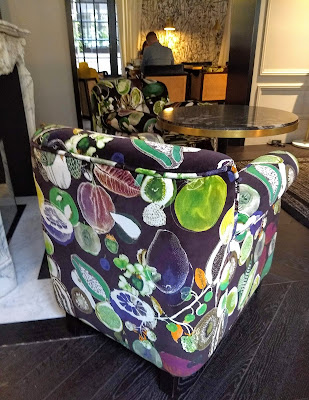 I also selected the location because it is about 2.5 miles from the apartment; walking there and back would give us at least a 5-mile walk.  With diversions, we walked a mile farther.

Our reservation was for 1:30PM.  I expected to see the restaurant half full of business people having lunch, but only two other tables were occupied.  Why so few people, I do not know, because everything was superb (except perhaps the duck, which was a little dry).  Both of our main courses involved plenty of vegetables, artfully cooked and arranged.  Tom's sea bass filet was outstandingly good.

This was the kind of restaurant that, in addition to having linen tablecloths and serviettes, served butter with the bread, without anyone having to ask for it.

The bread was worth mentioning because it was in the form of individually sized baguettes that did not have to be sliced, and so were especially fresh and delicious.

The decor was delightful, except perhaps for the crazy wallpaper in the other dining room.  But the dining room where we were situated was understated and elegant.

Tom's dessert, a lemon meringue pie, was the most artistically arranged dessert I've seen in a long time.  Mine was a chocolate lava cake, but the lava wasn't just dark chocolate; it had an exotic fruit flavor, too, mildly reminiscent of orange.


The service was attentive and friendly, but not obtrusive and not arrogant.

The trip to the restrooms was an adventure.  The head waiter led me through a couple of the hotel lobby rooms to a plain door, which he opened for me.  There was a stunning white marble and shining brass spiral staircase  that descended deeply into the subterranean level of the hotel.  Every surface was dazzling and new.  The restroom was actually the elegant locker and shower room for the spa!

After the lunch we continued our walk westward on the Cours Albert 1er toward the Pont de l'Alma.
I soon realized that we were walking in front of a neo-Gothic style building that I've always admired from across the river.  Great, I thought.  Now I can see what this building's entry looks like on the street level!

Surprise!  The beautiful entry had a name engraved on a block on one side of the elaborate carved stone doorframe:  R. Lalique!

René Lalique (1860-1945) was a master glassmaker and jeweler whose work was a hit at the 1900 Universal Exposition in Paris.  I've adored Lalique glass for a long time.  The architect Louis Feine designed this home, workshop, and gallery for him.  It was completed in 1904.

As we walked on toward the bridge, Tom asked me if the church spire we saw over on left bank was the American Church.  I said yes, and then I turned and said the American Cathedral (Episcopal) is right over there, on Avenue George V.  It was then that I realized that this very spot is probably one of the few places where you can see both of these American churches' spires. 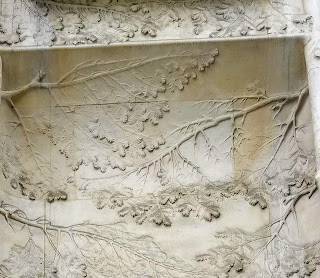 Just after we crossed the Seine, at the Place de la Resistance there was much noise and confusion.  A jackhammer was working away at the road construction there, and police motorcycles were spinning past.  Police officers where stopping and directly traffic weirdly.  Tom surmised that someone very important was about to pass through this intersection or just had passed through.  A number of people were standing around, as if waiting to see the personnage.

We waited briefly, but I wanted to go on because the jackhammer noise bothered me.

Our next stop was the American Library in Paris, on Rue General Camou.  Tom had to look up something in Mark Twain's memoir Life on the Mississippi.

He went directly to the American literature shelves and could not find it with Mark Twain's works.  I then helped him by finding the book in the online catalog on one of the library's computer terminals.  Weirdly, the library had assigned this book to the Travel section.  Mark Twain would be amused.

[Note:  The pause of a few days in this journal was caused by our attention to Hurricane Dorian.  Please give to relief efforts.  We did so via a "wedding registry" on Amazon which allows you to purchase needed items and have them sent directly to the relief efforts.  Search for "helpthe bahamas" in Amazon's wedding registries.]
Posted by Barbara Joy Cooley at 4:39 AM

Hi: You two are a walking travel travel agent with great detail on exactly where you are in Paris and what the special things to be seen are. I love the attention to the detail....I think I might miss a lot of very interesting architecture if I wasn't seeing it through your eyes! Keep up the good work!