The Woman with a Monkey

The Woman with a Monkey is arguably one of the most beautiful works in the City of Paris fine arts museum, the Petit Palais.  Years ago, she was on display with all the other statues in the gallery on the main level.  Then she disappeared.  I thought that perhaps she was travelling with the Paris 1900 exhibition which recently went to the U.S. 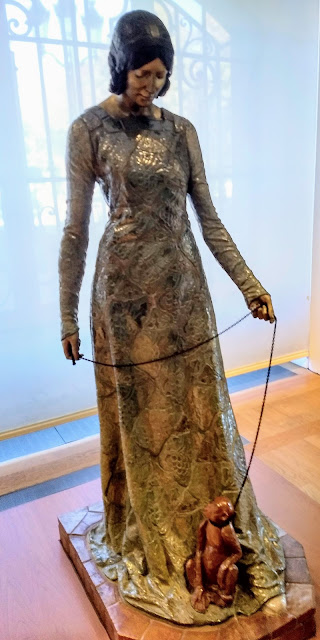 But in my research, I learned that she is in Room 19 of the Petit Palais.  I think I know why.

She is fragile.  She is made of a combination of gilded bronze and enameled stoneware on a framework of metal and wood, with mortar made of crushed brick and joints of colored plaster.

What a nightmare to try to preserve and protect! 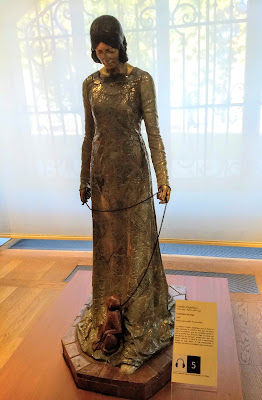 The Woman with a Monkey now presides over a lovely room off the beautiful back corner staircase in the highly climate controlled lower level of the museum.  There she is protected from accidents as large statues are moved in and out, as they are in the upstairs sculpture gallery.  And in Room 19, she is at home with other beautiful Art Nouveau works.  For example, she faces towards Hector Guimard's beautiful Art Nouveau dining room (below). 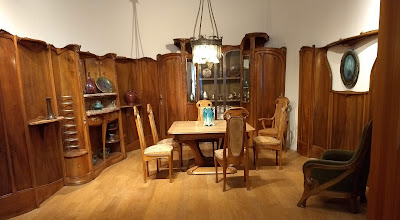 The sculptor who made her, Camille Alaphillipe, was born in Tours in 1874 and died in Algeria after 1934.  He won the prestigious Prix de Rome in 1898 for his statue of Cain after the death of Abel.  He was featured in the 1908 Salon of French artists, when he sold this stunningly beautiful statue of the Woman with a Monkey.

Hieratic and mysterious, the work owes as much to the symbolist image of the femme fatale holding an admirer in chains as to the neo-medieval inspiration that was special to its author. The ensemble forms a kind of giant art object, and the charm of its silhouette and its shimmering colours make us forget the technical prowess and ingenuity of this artist who deserves to be better known.

Camille Alaphillipe went to work as a manager of an architectural ceramics factory in 1914.  I know that many of the French who went to Algeria were poor, and the fact that his death date isn't exactly known implies that he died in obscurity.  What a shame! 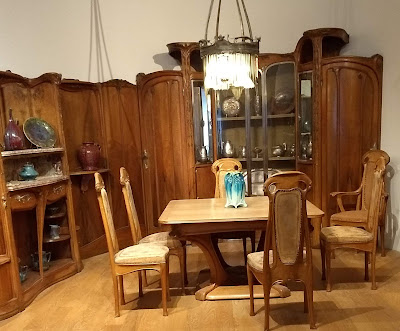 Tom and I toured the lower level of the museum -- something we had not done in years.  I was so impressed by the works on display there!  Of course, the City of Paris owns far more art than it can display at once, so works are cycled.  Now there are some very important paintings and other objects on display in that lower level, including some major Impressionist works by Sisley, Gaugin, and Cezanne.

This museum is not to be missed.  And, it is not crowded.  Be sure to go next time you're in Paris.  Admission to the permanent collections of this fine arts museum is free.
Posted by Barbara Joy Cooley at 3:07 AM

I guess I never finished reading last summer's Paris Journal...because I was too busy getting ready for my own trip to France! And though we didn't see your strong suggestion to visit the Petit Palais, we did anyway about a month later (mostly on the basis of your earlier café recommendation!). We saw the art nouveau furnishings and other choice things on that lower level but missed "The Woman with a Monkey"! I can't help but think of Seurat's woman with a monkey on La Grande Jatte...and I wonder if the cyclist Julian Alaphilippe is related to the sculptor. I will spend some time catching up on your Journal while you would normally be getting ready to go to Paris...which I assume you're not doing this year!