A weekend for dining and walking

For once, we had a real weekend during which we didn't work much.  It started on Saturday evening with an hour-long walk before dinner.  I showed Tom the verdant Rue Cognacq Jay, with its flowering shrubbery lining both sides of the street.  Then we dined for the second time at Cleo, a hotel restaurant on the Avenue de la Tour Maubourg.  We each had a delicious filet of beef accompanied by Swiss chard and puréed potatoes.  The service could not have been nicer.

[Video is from Saturday afternoon, when the Yellow Vest protesters marched peacefully
down the Rue du Commerce.]

Our timing was perfect again on the walk home; we passed by the Champ de Mars just as the Eiffel Tower began twinkling, on the hour, for ten minutes.

On Sunday, we took off for a mid-day walk, starting with a stroll through the Village Suisse.  A few of the antique shops were open, but most elect to be open by appointment only these days.  The shops are so small and the windows are so large that you can see just about everything in them even if they are closed.

The Champ de Mars was the site of the La Parisienne athletic event this past weekend, so on Sunday morning, some of the adjacent streets had been closed off.  In the afternoon, the event was winding down, but a festive atmosphere remained.

We decided to walk up the Avenue de Suffren to the Seine, where we continued a very long trek along the river bank over to Rue de Bac, where we ascended to the street level so that we could enjoy a mid-afternoon Sunday dinner at Le Frégate, a very traditional brasserie on the Quai Voltaire across from the Pont Royal.

I have so many fond memories of Sunday afternoon dinners at Le Frégate.  It is the kind of place where you can always count on being able to order the French classics, like blaquette de veau, boeuf bourgignon, sole meuniere, pot au feu, etc.  This time I ordered the sole meuniere and Tom had the boeuf bourgignon.  Both dishes were a great success.

Tourists were out at the sidewalk tables enjoying drinks and snacks.  Locals were with us, inside, enjoying a leisurely Sunday afternoon dinner.

We'd walked far beyond our daily goal on both Saturday and Sunday.  So we took a taxi home from the Rue de Bac.

Today, Maria the cleaner came to the apartment.  She has returned from vacation, and we were very happy to see her.  After exchanging greetings, we got out of her way.  We went for a long walk along the Rue Lecourbe and Rue de Sevres to the Boulevard Montparnasse.  I've always wanted to have lunch someday at La Coupole, and so today turned out to be that day.  La Coupole is a great big fancy Art Deco brasserie/restaurant where the servers take their jobs very seriously.  All the classic French dishes are on the menu here, too, like at Le Frégate.  And there is, curiously, an Indian lamb with curry main course as well.  Unlike Le Frégate, La Coupole has crisp white linen tablecloths and serviettes and there is a luxurious amount of space.

I ordered the surpreme de volaille jaune with mixed veggies and a light mushroom sauce, and it was very good.  Tom ordered a flank steak (onglet de boeuf) which turned out to be so tough it was inedible.  The server noticed Tom struggling to cut the steak.  He immediately offered a sharper knife, which helped, but then Tom found a long, wide, pervasive streak of gristle in the middle of the steak.

Once again, the server noticed the trouble and immediately offered to replace Tom's steak.  Tom asked for the beef filet instead (which costs 10 euros more).  Eventually, the replacement steak came, with very good sauce and a big order of green beans on the side.

When the inedible steak was taken away, Tom was impressed to see a cluster of waiters dissecting and examining the meat.  They seemed to agree that it was unacceptable. 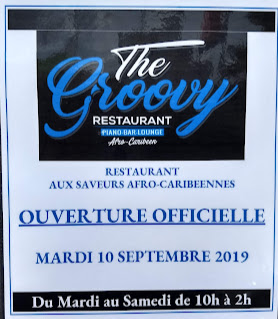 On the way home, we took a slightly different route, veering off the Rue de Sevres onto  the Boulevard Garibaldi, then the Rue Miollis.  There we saw that the piano jazz bar called The Groovy which Tom had discovered a couple weeks ago had an announcement posted on its façade: the official opening of The Groovy is tomorrow!  I hope we can go to hear live jazz there.

I showed Tom that the entrance to the enormous UNESCO annex is directly across from The Groovy.  It is so inauspicious that it is easy to miss, but this large complex is certainly the most significant institution in this quarter.

Here are more photos and a video from the past few days: 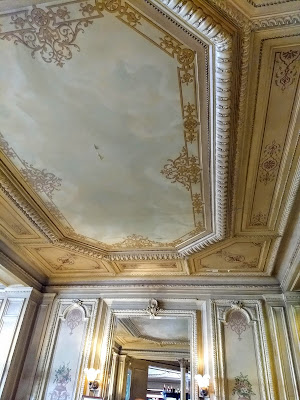 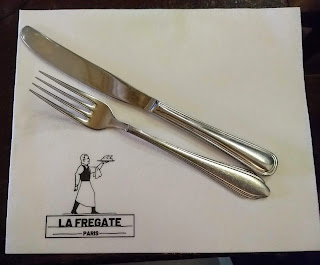 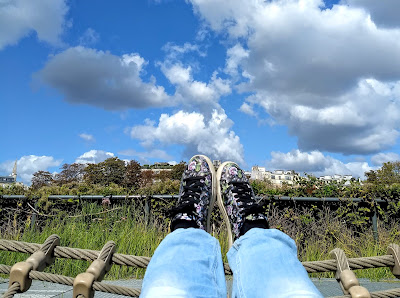 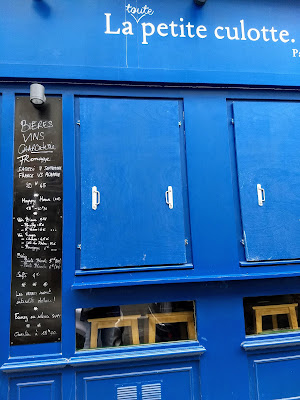 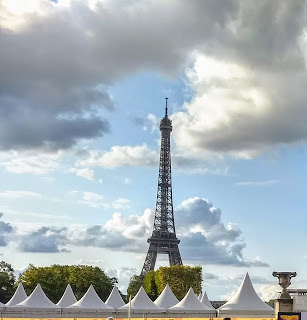 Posted by Barbara Joy Cooley at 7:03 AM