We put our Navigo Easy passes to good use yesterday, zipping over to the Mabillon station on line 10 of the Metro, saving our energy for walking in that older quarter where we used to stay in September. (By the way, I now know that just after I hold my Navigo Easy pass over the purple part of the turnstile control, the blurry green window displays the number of tickets remaining on my pass.  Yesterday the green fuzz spelled out 12 solde, meaning I have a balance of 12 "tickets" yet to be used.)

The Metro ride was quick and comfortable.  The Mabillon station's escalator took us up to the street level, and we began the day's adventure by exploring the indoor Marché Saint Germain, which was surprisingly open at 2:30PM.  I remembered this market being typically closed from 1 to 4PM, re-opening in the evening until 8PM.  Yesterday, about a third of the vendors remained open at mid-day, but our longtime favorites, a butcher and a cheese monger, were closed -- maintaining the old tradition.  A corner of the marché has been turned into a small restaurant; only one table was occupied when we passed by.

I've been looking for romanescu every time I walk through a market with produce vendors.  For the first time this year, I saw two heads of it at the one produce vendor who was open in the Marché Saint Germain yesterday.  I refrained from buying the veggie since we were out walking and because those two heads were a little meager and lacking color.  Perhaps I will find some robust romanescu tomorrow at the Grenelle market, which has considerably more fruits and vegetables than the much smaller Marché Saint Germain ever could.

When we left the marché, we walked around the back side of the grand church of Saint Sulpice.  Around at the front entrance, some ushers stood at the door, so I surmised that a special service or wedding was going to take place soon; we did not enter the church.  The weather was far too nice for us to be indoors anyway.

So we strolled down the Rue Ferou to the Luxembourg Gardens.  We visited the statues of the queens that are on the west side of the central gardens:  Anne of Austria, Marguerite de Provence, and, last but definitey not least, Sainte Clotilde, the wife of Clovis I and my 45th great grandmother.

There is nothing special about my being descended from her; millions of people must be.  I thank Ancestry.com for my being able to trace the root. 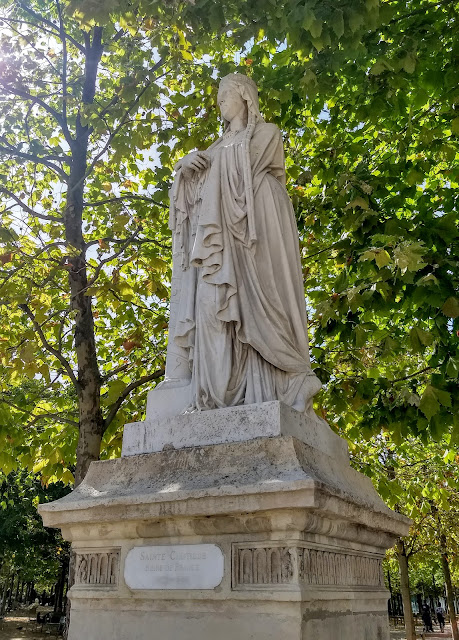 Here's an enlightening article from The Guardian that explains how so very many people are descendents of folks like Clotilde, Clovis, Pippin, and Charlemagne.

For some reason, the plaque on the statue's base does not include Clotilde's birth year, but according to Wikipedia, it was 474.  Tom took an austere family photo of the two of us, then I bid granny farewell and we continued on our walk through the stunningly beautiful park.

We continued through the two parks south of the Luxembourg Gardens until we reached the Place Ernest Denis, where we stopped to look at the magnificent Fontaine des Quatre Parties du Monde -- the Fountain of the Four Corners of the World.  This fountain was a joint effort of three sculptors:  Jean-Baptiste Carpeaux (1827-1875) won the commission for the fountain and he created the four female figures at the top; his student, Eugene Legrain, made the sphere; and Emmanuel Frémiet made the horses around the base.  I don't know for certain who made the turtles, but I'd guess that it was most likely Frémiet.

Strolling down the Boulevard Montparnasse, I remembered that I had not yet shown Tom the shopping gallery that I'd found near the famous and elegant brasserie, La Coupole:  Galerie des Parnassiens.  We took a little detour so he could see it.  These days, the gallery mainly serves as a way to get to the cinema at the southern end of it.  The gallery's shops and Chinese restaurant look a little tired, like some undistinguished throwbacks to the not-very-glorious past.   But the place is oddly quaint and worth seeing.

Speaking of cinemas -- there are so many of them in the stretch of the boulevard from La Coupole to the Montparnasse train station!  That seems unusual in these days of internet streaming.  Cinemas all over the world are disappearing, but here along this boulevard they survive.

Tom and I don't really understand why people like to walk down the commercial part of the Champs Elysées.  We think the Boulevard du Montparnasse is much more representative of a grand and very real Parisian boulevard.  Think about it:  all the famous old brasseries where great writers lingered, the bookstores, the nearby Montparnasse cemetery, the cinemas, and so on.

We rounded the corner at the enormous Necker children's hospital campus and soon found ourselves at a minor taxi stand on the Rue de Sevres.  My fitness app said we'd surpassed our walking goal for the day, and we were expecting a friend at our apartment in an hour.  So we asked a taxi driver to take us home.

Our friend Ann came by for a drink, and then we walked around the corner to dine at Le Café du Commerce.  Ann told us a little about her vacation in the Alps, but mostly we talked about literature and music.  She is an instructor at the Sorbonne; her field is medieval music.

After dinner, we walked with her to the Commerce Metro station and said our farewells.

Here are more photos from the day's adventure: 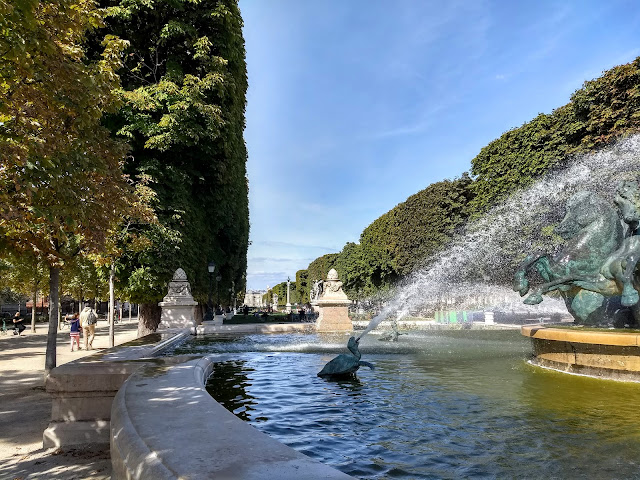 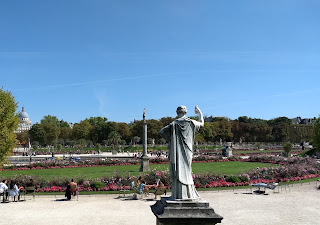 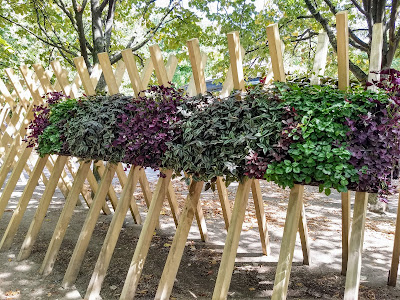 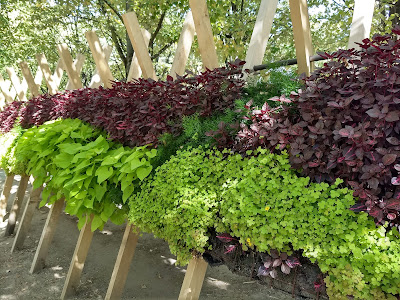 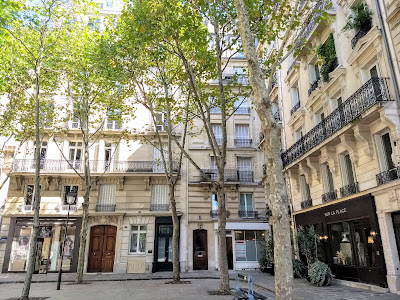 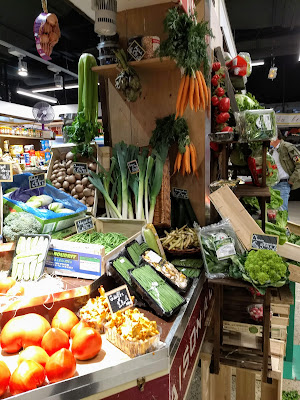 Posted by Barbara Joy Cooley at 4:10 AM