The mundane is so important

August 22, 2017 – There was too much excitement at home yesterday; we didn’t go out until dinnertime.

Scaffolding had been delivered earlier in the day – two truckloads of it.  Then a crew arrived and began erecting it on the façade of our building.  So begins the process of ravalement -- the cleaning and repairing of the façade of a 7-story post-Haussmannian building in Paris.

I know that Paris has a law requiring the cleaning of building façades periodically.  Our friend Jim, who lives in Paris and Sanibel, tells us that the requirement is for the work to be done every ten years (articles L132-1 à L132-5 du code de la construction et de l'habitation – CCH).


However, we’ve been coming to Paris and staying in this building for 20 years, and in that time, this façade cleaning and repair work has not been done.  I suspect the same is true for many Parisian apartment buildings – they’re overdo for a redo.

The building façade is stone – a rather soft stone, perhaps a sandstone.  Balconies are limestone, with lots of interesting fossils.  The stone decorations on the cornices and elsewhere seem to be soft because they erode so much with the weather – at least, on our building they have eroded.

Mortar joints between blocks of stone are very narrow.  Joints between sections of limestone on the balconies seem to be wider, and they hold iron bars that fasten the balcony railing to the building.  Some of that iron is completely exposed and rusting on our balcony. 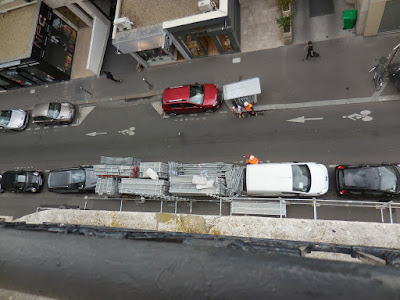 We know all too well how critically important it is for building façades to be maintained.  A friend of mine (attorney and former OSU football player Ben Espy) lost his leg when a cornice fell from a building in downtown Columbus.  The building’s façade had been neglected.

We’re all for this work that is about to be done, but I was concerned about the dreariness of living in a dark apartment for a week, and not being able to open the front windows.

Now that I see how long it takes to erect one level of scaffolding, I realize that by the time they have the basic scaffolding up to our level, we will be leaving.

After the basic scaffolding is up, a fabric (fiberglass?) skin it put on it to help protect pedestrians and cars from falling bits and pieces. 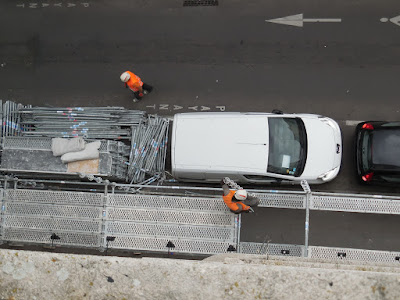 Yesterday, two truckloads of materials were delivered, and from that, one level of scaffolding was erected.  We’ll see how it goes.  We are on what is called the 5th floor here, which is what we’d call the 6th floor in the U.S.  In France, the first floor is 0, or “street-level.”  There is one level above us, where the former maids’ rooms are located.  A few of these have been cobbled together into apartments, but some are still just single rooms.  We have access to one of those, a room with a lovely view of the Eiffel Tower.

Before we ever arrived this summer, the owners of the apartment had someone move almost all of the balcony’s many plants down to the courtyard behind the building.  There, hopefully, the guardienne’s husband has kept them watered.

But a few plants, a couple chairs, watering cans, a garden hose, and a VERY heavy marble-topped table remained on the balcony.  We had to move those inside the apartment yesterday.  I insisted on cleaning the apartment before introducing this chaos.  (The cleaning lady is on vacation in Portugal.)

So we were busy with cleaning and moving furniture for most of the day.  A few things went up to the maid’s room, but most of the stuff is scattered about the dining room, in as orderly a fashion as is possible in an already overly furnished apartment. 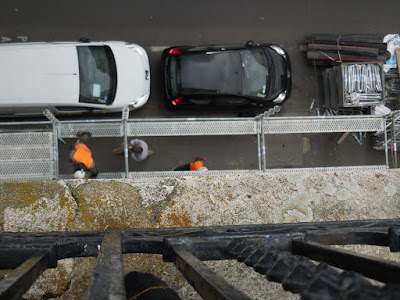 The poor vacuum cleaner has been abused.  A couple years ago, I had to buy a new part for it when we arrived at the beginning of the summer.  I swear, next summer I’m buying a new vacuum cleaner for the place.  More than twenty years is long enough to expect a poor, abused vacuum cleaner to work, even if it is a Hoover.

One year we bought a new toaster for the apartment.  Another year, we purchased a new microwave to replace one that died.  We also replaced a coffeemaker in the not-too-distant past.  So you see why we felt the need to check out the new appliance store, Boulanger, earlier this summer.  We are serial appliance buyers.

We aren’t tourists.  We really live here in the summer.  We’re keenly aware of the hardware stores, electricians, plumbers, and appliance stores in the neighborhood.  That’s life.
Posted by Barbara Joy Cooley at 1:50 AM