August 21, 2017 -- We went to the 10th arrondissement yesterday mainly to walk along the picturesque St. Martin canal, but we also visited the two sides of the Saint Louis hospital that we had not seen on August 4 (see Yesteryear to this Year, August 5).  We’d hoped to see the garden at the middle of the huge old hospital.  Everything I’d read indicated that the garden would be open yesterday afternoon, even in August.  But it was not.  We wistfully looked through iron gates covering archways that led to the garden.  Maybe someday . . . . 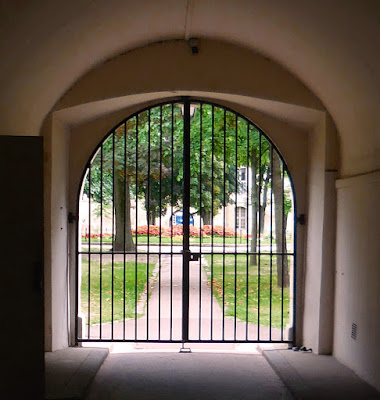 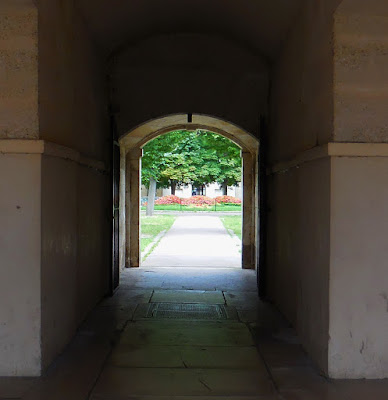 We wanted to see it because it is like the Place des Vosges; both the Hopital Saint Louis and the Place des Vosges were was designed by the same architect, Claude Vellefaux.   Here’s a translation of the historical plaque we found near the hospital’s main entrance yesterday:

The construction of the Saint Louis hospital was decided by Henri IV in 1607.  Initially intended for plague victims, the establishment was named for Saint Louis, who died from this malady when he returned from a crusade.  Claude Vellefaux, the architect of the Hotel Dieu, directed the work, under plans by Claude Chastillon, the engineer and architect of the king.  The complex is arranged around a central quartered court surrounded by four large buildings, flanked at the centers and at the corners with pavilions, high coffers, and lofts.  The isolation was total.  The old Saint Louis hospital remains one of the most beautiful 18th century constructions in Paris; the new buildings were erected from 1981 to 1984.  [A new building is currently under construction as well.]

We entered the hospital grounds and walked around.  The original structures formed a square within a square, all the better to quarantine the patients from the outside world.  It was the inner square that we could not access, but there was plenty of space to walk through inside the outer square.  The hospital is huge, and includes many modern buildings that are not the least bit in harmony with the old 17th century architecture. 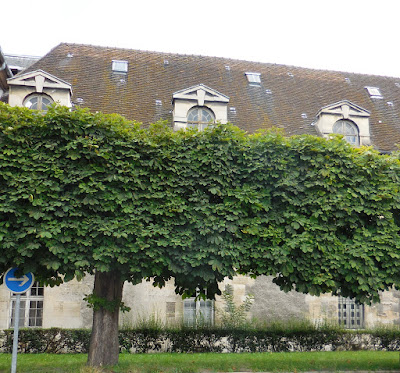 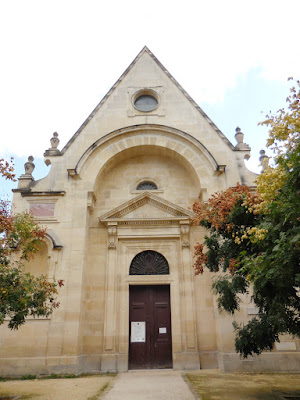 Hopital Saint Louis is a hard-working public and research hospital with a stellar reputation.  Decisions about architecture were made with function and budget in mind, I’m sure; historic preservation and harmony took a far back seat.

When we left the hospital grounds, we walked back to the canal along the rue Alibert.  We found this interesting sign about the canals, which I’ve translated for you:

The canals of Paris are frequently the sets of movies.  Alexandre Trauner, filmmaker, had constructed in the studios of Billancourt a set replicating the ambiance and the life of the neighborhood around the Canal Saint Martin and the Hotel du Nord, immortalized by Marcel Carne in 1938 in his film titled Hotel du Nord, in the style of “poetic realism.”
In 2001, “Le Fabuleux Destin d’Amelie Poulain” by the filmmaker Jean-Pierre Jeunet, gave the canal another “atmosphere.”

The Canals – a history to discover, a heritage to preserve
A unique case in France, the City of Paris maintains a fluvial network of 130 kilometers of navigable waterways, located in five departments and two administrative regions.  This network, property of the City of Paris, is composed of the following canals:
·        The Canal Saint Martin, entirely situated in Paris, that crosses five arrondissements
·        The Canal Saint Denis, that goes around the edge of Paris by the 19th arrondissement, in Saint Denis
·        The canal de l’Ourcq, that goes from Mareuil sur Ourcq to Paris (19th arrondissement).

Along the way, we paused at the Canaletto café for refreshments.  Tom enjoyed a big dish of Italian ice cream topped by whipped cream, and I had a snack consisting of tiny toasted Italian bread triangles stuffed with almost melted mozzarella cheese and sun-dried tomatoes.  Yum.  The service at the Canaletto was friendly.

Residents of the 10th were taking full advantage of their canal and water views, treating its cobbled banks as their own local beach for picnicking (but not swimming, of course).  It was a delightful scene.

A few less accessible nooks of paved canal bank were occupied by tents belonging to homeless people.  It is impossible to tell how many of these folks are or are not refugees.  All people look alike; how can you tell an unemployed, homeless French guy of North African descent from a recent refugee from North Africa?  You can’t, unless you engage them in conversation – and that’s intrusive.

We just walked and walked, enjoying the Sunday afternoon’s lazy ambiance.  At the rue du Faubourg du Temple, we turned right and walked the short distance to the Place de la Republique, where the line 8 of the metro took us home to the Place du Commerce at the end of the day.

In the evening, we enjoyed a stroll to the lower 15th arrondissement for dinner at the Café des Ecrivains.   There we had a very affordable and acceptable dinner, across the street from the financial operations center for the Banque Postale – a large, important institution hidden away in that unassuming neighborhood on the rue des Favorites.
Posted by Barbara Joy Cooley at 4:01 AM