Strolling in the rain without reservation

August 9, 2017 -- Our first pause on yesterday’s walk was at the Square des Missions Etrangères, the Foreign Missions Square, on the rue de Bac.  I was attracted by the centerpiece of that square, a handsome bust of Chateaubriand (1768-1848).

Chateaubriand was somewhat different from other writers/intellectuals of his time in that he remained a faithful Catholic.

He’s also interesting to me because he traveled to America when our country was still young, in 1791.  He claimed to have some fascinating adventures there, including living and travelling with Native Americans.  (See this write-up in Wikipedia.)

Some critics think he made it all up.  But his stories had to be inspired by some experience, didn't they?

We continued up the rue de Bac to its origin on the boulevard Saint Germain.  Paris was shrouded by a light, cool rain, but we had our umbrellas and jackets, so on we went, up the boulevard.

At the boulevard’s most congested area, we escaped to the picturesque and peaceful rue Jacob.  The narrow sidewalks there had few other pedestrians, due to the rain and due to the fact that these middle two weeks of August are when Paris streets are the most deserted by Parisians, who are mostly in the south of France now, where the weather is toasty  -- almost too toasty.

At the end of the rue Jacob, we were drawn into lovely, shady square at the rue de Furstemberg.  Tom always likes to walk through the décor store there, Flamand.  When we exited at the far end of Flamand, we were across from the back door of the church of Saint-Germain des Prés.

That isn’t my favorite church in Paris because it was originally only for the church elite; the common people had to worship elsewhere, like at Saint Sulpice.  However, both of us were awestruck at the beautiful restoration of the painted decorations in the Saint Germain des Prés church.  We’d entered through a back door, so we were initially seeing the ambulatory, apse, chancel, and choir sections of the church, where the restoration has been completed.

The work is ongoing in the transept, which is walled off with huge sheets of thick plastic.  But the center aisle is open from the nave through to the altar and choir area, since a false ceiling was erected above the center of the transept to allow for work on the ceiling there, and still enable worshipers in the nave to see the altar.

The restoration goes on, and the worship goes on.  More photos from Saint Germain des Pres, below. 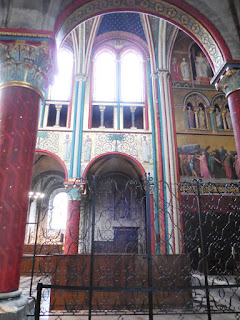 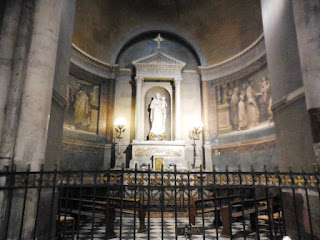 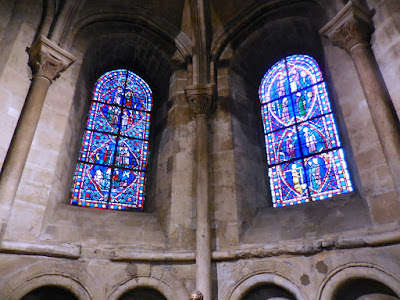 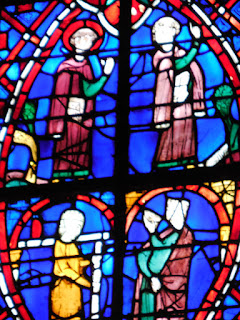 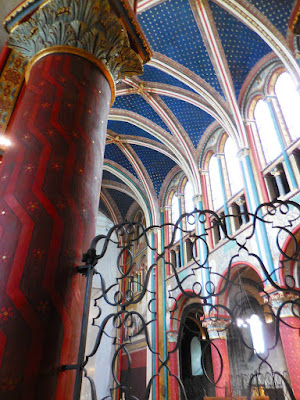 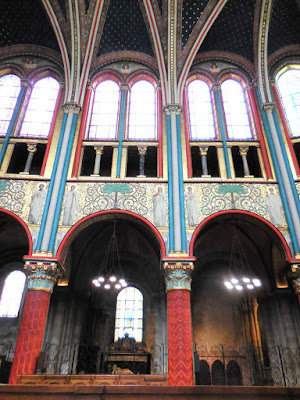 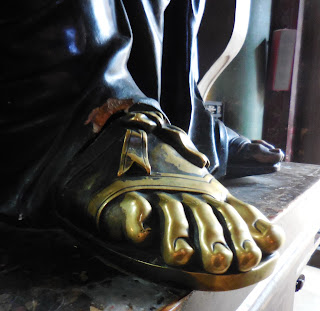 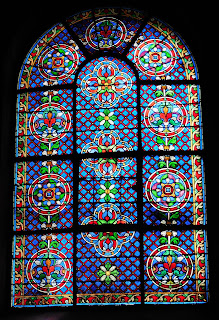 In the narthex, I picked up a brochure about the restoration because we intend to make a small contribution towards it.

After our visit to the church, we continued along the boulevard Saint Germain.  We paused to chat with the young woman who manages the tank-top stall where our granddaughters bought three tank-tops not long ago.

At the boulevard Saint Michel, Tom wanted to walk up the hill to the square in front of the Sorbonne.  We did that, but it was farther than he thought it would be.  So we stopped for refreshments on that beautiful square at L’Ecritoire (the writing board), an attractive, old café with a zinc bar.

Normally, Tom would just order a café gourmand which includes a few small treats to stave off hunger pains.  But this time he was really hungry, so he ordered a Poire Hélène as well.  Wow, what a lovely concoction of poached pear, liqueur, dark chocolate sauce, and whipped cream!  I certainly had to help him consume that!

Prices are reasonable at L'Ecritoire, and the service is very nice.  We recommend it when you're in the 5th.

We were able then to continue walking up the boulevard until we reached the ancient rue des Bernardins, where we turned off the boulevard so we could visit the beautiful church of St. Nicholas du Chardonnet on the rue Monge.

The beauty of this church is more subtle than that of Saint Germain des Prés.  St. Nicholas du Chardonnet was originally built in the 13th Century, and rebuilt from 1656 to 1763.  It is now used by the traditionalist Society of St. Pius X, a conservative fraternity of priests headquartered in Switzerland.  I particularly admire all the crystal chandeliers in St. Nicholas du Chardonnet (photos below).  The church is also known for hosting a series of concerts. 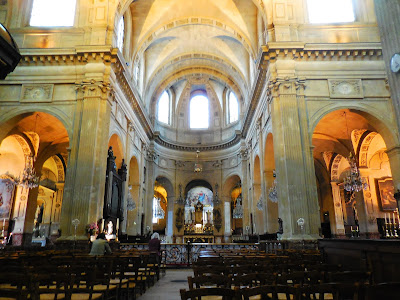 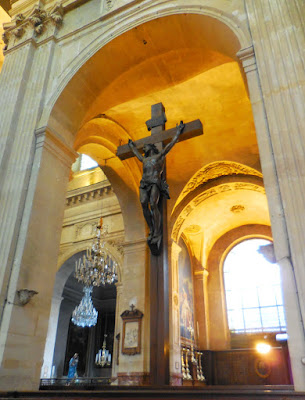 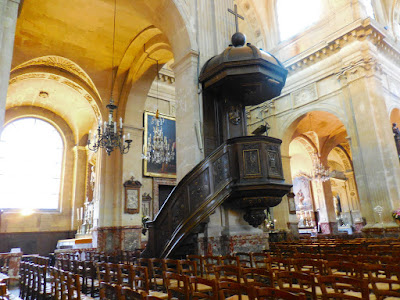 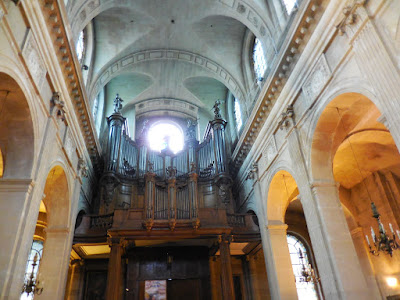 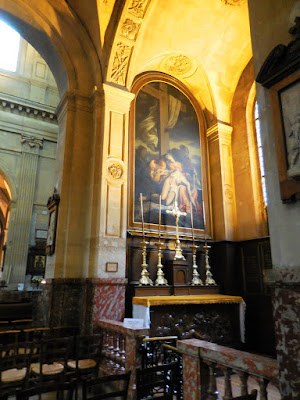 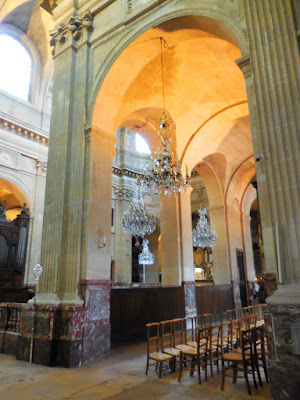 As afternoon showers gave way to evening, we boarded the metro and rode home from the 5th to the 15th.  We went out again for dinner at a local brasserie, L’Oustal, where the evening star was a stunningly delicious endive and Roquefort salad.

Posted by Barbara Joy Cooley at 5:05 AM