August 4, 2017 – Crowds – we hope to avoid them – especially crowds so thick you can hardly move.
That’s what we found when we emerged from the Palais Royale Musée du Louvre metro station and moved toward the entrance to the Musée des Arts Decoratifs.  This decorative arts museum is located in the west wing of the Louvre, but it has its own separate entrance on the rue de Rivoli.  If it didn’t seem to be too crowded, we intended to go visit it.  But the extremely long line told us that, even if we’d bought tickets online and avoided the line of people waiting to get in, we would still find a museum that was uncomfortably crowded inside.

Perhaps it is the Christian Dior special exhibition that is drawing the large crowd.  We will try to go some other time; there is nothing we want to see so much that we’d endure a crowd like that.

We walked down the rue de Rivioli, and on its eastern stretch, we found those sidewalks to be uncomfortably crowded, too.  We would have fled to the streets to the north of there except that Tom wanted to visit the English-language bookstores on Rivoli – Galignani and W. H. Smith.

On our way from the crazy part of the rue de Rivoli to the bookstore part, we strolled more easily along the stretch that is home to some of the most luxurious hotels in Paris – Le Meurice, for example.  There was room to move there, without so many souvenir shops.

In the bookstores, Tom was looking for some French language books for English speakers.  He didn’t find anything he wanted to buy, but we both enjoyed browsing through the sizeable shops.  W.H. Smith, in particular, is looking much better organized and displayed than it did years ago.  Before the internet became so useful, we used to spend a large amount of money in these two bookstores every summer, along with Brentano’s on the avenue de l’Opera, during our summertime stays.  We did it even though their prices are jacked up.  That spending was necessary, because of Tom’s work on English composition textbooks.

He's still writing textbooks, but can find the readings and samples needed, for the most part, via the internet.

Once we finished looking around at W.H. Smith, we headed for the Place de la Concorde again.  I enjoyed the vast area away from traffic once again, and Tom tolerated the monumental space.  When we reached the Seine, we decided to descend to its banks on the left bank side.  Oh, this part of Paris is so much more serene than that crazy area around the Louvre and Notre Dame!  I guess we’re just naturally left bank people.

At the Rosa Bonheure café barge, we stopped for refreshments, as we often do.  There is more competition for the Rosa now, and half of the barge was closed for repairs.  So we shared the part that was open with only a few other customers.  We like the simple honesty of the Rosa Bonheure space, and its great view of the Pont Alexandre III.

The Rosa seemed ready to welcome we South Floridians in particular; there were two pink flamingo floats on its roof.

We took our usual route home, pausing in the garden of the Musée du Quai Branly for a rest in the smooth white shelter that’s occasionally used for classes.

We crossed the Champ de Mars right at the foot of the Eiffel Tower.  The driver of a car pulled quickly onto the sidewalk in front of us and stopped.  That was a nutty thing to do.  We walked on, behind the car, when the driver suddenly put it in reverse.  We each reacted quickly and simultaneously by raising a hand in a “stop” motion and shouting, “HEY!”

Fortunately, the driver stopped and made an apologetic gesture when I turned to look at him as we walked quickly away.

I thought, moments later, that this could have been one of those incidents when someone drives into a crowd, intending to harm people.  But it wasn’t that, thank heavens.  This was just some frustrated driver using poor judgement, desperately trying to turn around.

We should have avoided the crowd at the foot of the Tower.  We will from now on.

The rest of the walk was peaceful and uneventful.  Even a short trip into Monoprix for my V8 juice (the only place I have found it in Paris) was surprisingly serene; usually that Grenelle store is crowded in the late afternoon.  But vacation time is here.  Over in the left bank, at least, Paris is calmer than usual as Parisians close up and head for the countryside for a few weeks.

Meanwhile, tourists from elsewhere flood into Paris.  But they gravitate mostly to the first six arrondissements.  The Eiffel Tower is our neighborhood’s only major tourist attraction.
We’re glad of it. 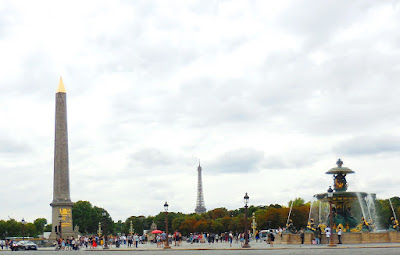 The shops that have not closed for vacation are offering special deals.  The para-pharmacy on the rue du Commerce was once again offering a super deal on liquid soap from Marseilles; just as we did two summers ago, we bought plenty for the apartment – probably enough to last for another two years.

As we dine in our favorite restaurants in the 15th, we dine with locals.  The occasional other English speakers show up, but often we are the only foreigners in the dining room.

Such was the case when we dined at L’Ardoise du XV  last night (70 rue Sebastien Mercier, off the rue St. Charles, just south of the rue de la Convention).  Our shared starter course was a country terrine that was home made.  Our main courses were a roasted guinea fowl breast with spring vegetables for me, and a pluma de negra dish of roasted pork with girolle mushrooms for Tom.  We shared a dessert that was a light version of a strawberry crumble.  As you’d expect in a restaurant run by someone (Maxime Vilatte and his wife Marie) who has earned the maître restaurateur designation, the food was all delicious and freshly made from top-quality ingredients – honest, simple, good food, beautifully presented.

We enjoyed our dinner there very much, and we were pleased that the restaurant is doing so well.  The place filled up with locals.  When the resto first opened just five years ago, it did so on a tight budget, we could tell.  We did not make it to L’Ardoise last year due to our abbreviated stay.  So it had been two years since we’d seen it, and evidently during those two years the resto has done well and built up a reliable clientele of locals.  We’re happy for the owners.
Posted by Barbara Joy Cooley at 3:10 AM