August 13, 2017 -- Many people visit the Père Lachaise cemetery to see Jim Morrison’s final resting place.  If you are interested in that sort of thing, visit this page on another person’s blog to read about 10 famous people in that famous cemetery.

Tom and I, however, were not interested in seeing any particular person’s grave.  I planned the walk to include the 20th and 11th arrondissements because the 20th was the only arrondissement we have not been to this summer.  I’m not sure about the 11th, but now we definitely have them all covered.  We’ve been all over the city this year. 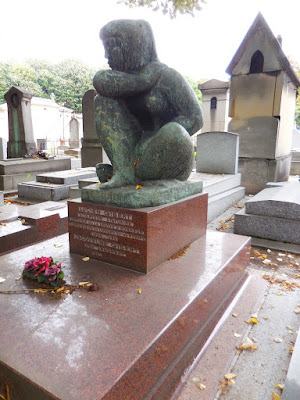 The Père Lachaise cemetery was the only thing I wanted to see in the 20th.  I like big old Parisian cemeteries because they are quiet, verdant spaces, with plenty of mature trees and interesting statues.

Twenty years ago, there were plenty of feral cats in the cemeteries.  Due to a systematic program of sterilization, the feral cats are now gone.  I miss them, but I understand why they had to go.
I think my favorite of the big Paris cemeteries is Montparnasse.  It has the best trees, and I like the layout of that place. 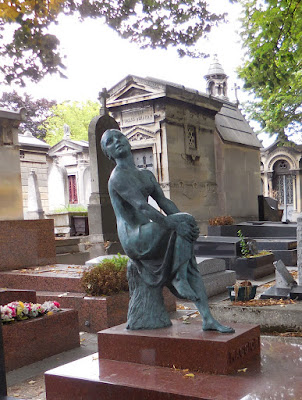 We entered the small gate at the northwest corner of Père Lachaise.  Then we walked a looping path through the northwest quadrant of the vast place.  I made an effort distance ourselves from a family of French tourists who were too noisy; one must remember that this is where people are visiting the graves of lost loved ones.  People should always be quiet and respectful in cemeteries.

We admired some beautiful statues and a few interesting graves from recent years.  One was not marked, except for a U.S. Mail mailbox. 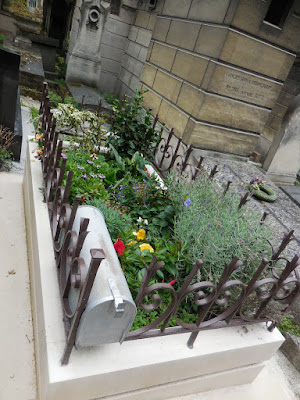 After a half-hour trek, we exited the main gate and began our walk in the 11th arrondissement along the rue de la Roquette.  We paused at the Square de la Roquette to look into this park established on the grounds of a former prison for women and juvenile delinquents.

From 1690 to 1789, this was the site of a convent.  In the 19th Century, it became the prison de la Petite Roquette, keeping the fortress-chateau architecture from the convent days.  La Petite Roquette remained a prison until 1973.  In 1974, it was demolished to make way for this handsome park, opened in 1977. 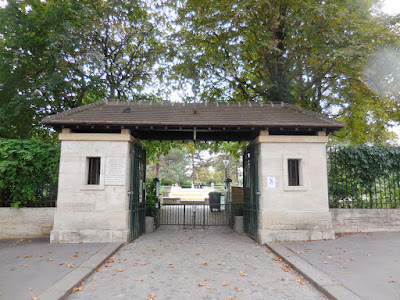 That park was the nicest thing we saw in that part of the 11th.  Because of the number of loud, aggressive drunk people and loud, roaming groups of adolescents, coupled with the general disrepair of buildings and infrastructure, I was uneasy in this part of the city.  That rarely happens to me in Paris.

Across the street from La Petite Roquette had been another prison, La Roquette, which housed hardened criminals and death row.  In fact, it was the final location of Paris’s final guillotine.
Perhaps that history of prisons still weighs upon this neighborhood.  Anyway, it is not my favorite part of the city.

In some ways, this boulevard is like the boulevard Pereire in the 17th, with its series of parks all in a row, making up the median of the boulevard.  But this neighborhood in the 11th is not as chic and quietly residential as that one in the 17th.  We had to keep our urban guard up in the 11th.

We were ready for a break when we reached the boulevard Voltaire, so we turned there in search of a brasserie for refreshments.

Just after we turned the corner, we were stunned to see that suddenly we were standing in front of the Bataclan theatre – the place where gunmen attacked on Friday, November 13, 2015.  Translucent paper covers the inside of the Bataclan’s windows, creating a somber, gray façade on the street level.

We walked on, in silence, until we reached a pleasant brasserie called Le Metro Cafe (35 boulevard Voltaire) for our break.  During that interlude, rain began to fall.  When it stopped, we left Le Metro and made our way up the boulevard Voltaire to the grand Place de la Republique, where we took the metro home.

We climbed the metro steps to the street level at the clean, orderly Place du Commerce, in the heart of the 15th.  Home sweet home, I thought.  How the 15th has changed so much, for the better, in 20 years!  The Place du Commerce environs have a peaceful, vibrant buzz.

I admired the pigeon-topped Lulu kiosque and the Place while Tom was in the Eric Kayser bakery buying a fresh, warm, traditional baguette.  A sign posted on the bakery’s window proudly announced that the place would be open on August 15, the big Feast of the Assumption holiday.  Hooray, Eric Kayser! 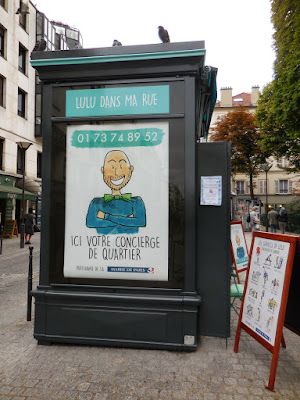 In the evening while cool rain fell, we dined simply at Le Café du Commerce, the big restaurant behind our building.  The service is impeccable there; it is the kind of service that Le Train Bleu should have, but doesn’t.

We have so many blessings here at home in Paris.  We are grateful and appreciative of the efforts that go into all the things and places that we love in this city. 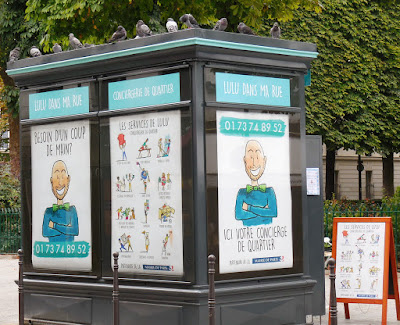 Posted by Barbara Joy Cooley at 1:38 AM