August 20, 2017 – 1860 must have seemed like a revolutionary year in the Paris region.  It was then that many surrounding villages – or “communes” --  were annexed to Paris.  That’s what happened to Grenelle, where I sit now, in the 15th arroundissement, and it was true in Montmartre, on the other side of the city.

But the annexation wasn’t so straight-forward in Montmartre.  Part of it was not annexed, and instead it was added to the commune of St. Ouen.  One entire commune, La-Chapelle-Saint-Denis, was erased; its territory was divided up between St. Ouen, St. Denis, Paris, and Aubervilliers.

This re-arrangement of suburbs and city must have been confusing to the residents.  But yesterday, when we emerged from the Garibaldi metro station in St. Ouen, all seemed to be clean and orderly – as if it had been that way for a long time.

The centerpiece of the Garibaldi intersection is an almost 20th Century church called Notre-Dame-Du-Rosaire-de-Saint-Ouen.  Its first stone was laid in 1898, but its famous windows were products of 1909 to 1930; they were created by Charles Lorin, Florentin Delabre, and Charles Champignuelle.
I love the gracious outlines of that church, and I love the community park next to the it.  The park has plenty of mature trees and families with kids abound there.

We’d explored the church and the park in the past, and we know from past visits how very much there is to see in St. Ouen, so we moved on right away to the main attractions:  the flea markets of St. Ouen.

These so-called “fleamarkets,” or “puces,” are actually an ongoing, nonstop, antiques fair.  There are tacky, actual flea markets outside of St. Ouen; you pass through them if you take the metro line 4 to Porte de Clignancourt and walk the rest of the way north to St. Ouen.

We don’t recommend that route.  We highly recommend that you take the metro line 13 to Garibaldi in St. Ouen and walk south to the “puces.”  That way you can avoid a lot of chaos and shouting people. (I will admit, however, that the line 13 is heavily used since it goes some distance outside the City of Paris limits.  Avoid line 13 in rush hour. Even on weekends, the train fills up.)

Like I said, in St. Ouen, there is order and cleanliness.

I was surprised to learn from Wikipedia that the land upon which the St. Ouen puces rest is owned by a man, Jean-Cyrille Boutmy, who bought it from Gerald Grosvenor, the 6th Duke of Westminster.  The antique dealers each rent their space on a three-year lease.

The St. Ouen puces are rambling and seemingly endless.  There is no way to see everything there in one day.  In fact, Wikipedia claims that this is “the highest concentration of antique dealers and second-hand furniture dealers in the world” (citation needed).

The puces are arranged in markets.  Some of the markets are buildings, and some are covered spaces between buildings.  Yesterday, we visited markets called Le Passage, Jules Valles, L’Entrepot, Paul Bert, Serpette, Dauphine, and Malassis.  We’ve visited those in the past, too, along with Biron and Vernaison.  (Yesterday was the third time we'd visited St. Ouen.)

Many stalls in Dauphine and Malassis were closed for vacation time.  But there was still more than enough to see.  We kept on until we were over-saturated with sights of fine furniture, paintings, rugs, glassware, chandeliers, and collectible junk.  By then, it was time to head for home.  The puces are only open until 5:30PM, and it was nearly 5 by the time we boarded the line 13 metro for home.

I’m not sure why some people characterize St. Ouen as unsafe.  I suspect that view is a manifestation of racism.  There are plenty of people of color in St. Ouen.  We've never felt unsafe in St. Ouen; on the contrary, we feel at home there. 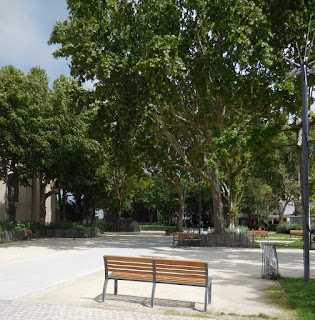 How the puces came to that area is an interesting story.  In the aftermath of that great series of annexations in 1860, the rag-pickers – called chiffoniers – were pushed out of Paris.  Beginning about 1870, they set up “shop” then between the city limits and the first houses of St. Ouen.

Starting in about 1885, the city of St. Ouen put order to the flea market area and officially opened the Marché aux Puces, or flea market.  Following some years of good publicity, the Sunday afternoon crowds of shoppers grew.

With that came the growth of entertainment outlets – bistros and cafés.  Gypsies also occupied the territory, and with entertainment venues now available, they shared their music, known as “Gypsy Jazz.”

In fact, as we sat on the edge of a terrace at La Pericole café, having a simple lunch yesterday, a well-dressed, older Gypsy woman came up to our table and offered to read our palms, to tell us about our future.  We politely declined.

Many more markets were added in the years after World War II.  Now the markets are open to the public on Saturday, Sunday and Monday.  Two wholesale market for professionals (l’Usine and Lecuyer)  open on week days (Wednesday through Friday mornings).

So, you’re probably wondering if we bought anything.  No, we did not.  We’re looking for an old sign that says “Ascenseur” to put by our elevator at home, but we haven’t found one yet.  The closest thing we saw was an old plaque with a warning to stay away from the elevator machinery.

In the evening, we had a very good dinner at L’Atypic on the rue du Theatre – a great way to end an atypical day.

Posted by Barbara Joy Cooley at 3:42 AM