Meeting at the Café

August 31, 2016 – Dick Walsh passed away in 2011, and the citizens Sanibel Island miss him still.  We always will.  He was a fine lawyer and a great Floridian, who served on the Sanibel City Council and was involved with the Committee of the Islands, a non-partisan political committee that I led for four years. 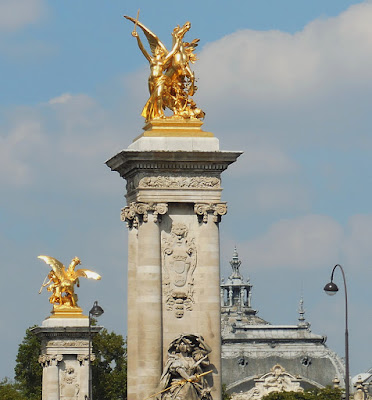 Tom and I had the good fortune to be able to spend a couple hours with his daughter Abra yesterday.  Several times as Dick and I sat next to each other in Sanibel’s city hall years ago, Dick had told me about Abra.  He just knew that she and I would have a lot in common, much to talk about.  My interest in the urban life and landscape, and her background in city planning, plus the love we all feel for Sanibel – yes, we have much to talk about.

He wanted us to meet.  I did meet Abra at the memorial service for Dick in January 2011.  (Five months later, my own father died.)

Abra has lived in France for twenty-some years, I believe.  She and her French husband have raised a family here, in the town of Versailles.  They were away for vacation for most of August, but before they left, Abra was sure to set up a time when we could get together and talk.

She suggested meeting at one of our favorite places, the café at the Petit Palais museum, after she had a business appointment in the city yesterday afternoon.

We sipped on Badoit.  Each of us ate a macaroon.  Mostly, we talked and talked.

We loved Abra’s resonant voice.  She does not sound like she’s from her home town of Chicago anymore.  She almost has a French accent when she speaks English!  She claims that her English has deteriorated.

We talked about family, education, cities, food, architecture, Tom’s textbooks, you name it.  Those were two fascinating hours.

After leaving the café, walked through two galleries and talked about some of the paintings in that great permanent collection.  Then the museum started to close up, and Abra needed to catch her train back to Versailles.

So we said our goodbyes and made plans to keep in touch about next summer.

Tom and I walked back to the apartment just in time to change clothes and walk to dinner at L'Ardoise du Quinzieme, on the rue Sebastien Mercier.

This restaurant just opened last year, and we were fortunate enough to find it then, with the help of Lafourchette.com.  We enjoyed our dinner there last year, and hoped that the place would survive.
It has.  There were signs of success here and there in the décor.  Two cheerful young women ran the dining room, and we never saw the chef.  He was too busy making magic in the kitchen.

Our server suggested we try a new hors d’oeuvre that the restaurant was offering for just 6 euros.  We said yes, and she brought out a little plate with six piping-hot fish fritters and a bit of sweet and sour sauce.  The fritters were perfect.

Tom ordered the cod filet served on a bed of big, softly cooked white beans, and I had the roasted duckling filet on a bed of velvety puréed potatoes.  Each of us had a millefeuille with vanilla cream for dessert – a classic, light and airy French pastry.

The restaurant successfully filled with patrons.  We felt finely fed and ready to walk again.  I like it when the restaurant is a 30-minute walk from the apartment, because that gives us another hour of walking, in addition to whatever hike we may have taken earlier in the day.

Tonight we will dine with our friends the Beckmans, about an hour’s walk from our apartment.  The plan is to try a new Brazilian place.  I hope I have time to tell you about it tomorrow.  If not, see you next summer!
Posted by Barbara Joy Cooley at 2:15 AM