A little Brazil, a little France

August 12, 2016 -- Dinner with the Beckmans:  we’d been looking forward to it.  This was a chance to laugh, talk freely, enjoy great food in great company, catch up on each others’ lives, and enjoy life.
Indirectly, we met them eleven years ago via this Paris Journal.  We’d become friends with one of the journal’s readers, a scientist from Berkeley, California.  Our scientist friend’s wife’s parents are old friends of the Beckmans, and so the connection was made.

The first time we spent September in the Beckmans’ apartment in the 6th was in 2006.  We are deeply grateful for all the wonderful Septembers we spent there.  What a perfect location it was, right around the corner from the Saint Sulpice church.  Other friends enjoyed the place, too.  We are all so fond of the Beckmans.

Elisabeth Beckman had lived in Brazil for part of her childhood.  So we wanted her to experience Le Pario, where the chef, Eduardo Jacinto, combines his French cooking skills with his Brazilian heritage – in a creative manner.

Dinner was a big success.  Everyone enjoyed their food, which was beautifully presented.  Tom and I shared a gnocchi starter that had a heavenly cheese sauce and interesting veggies.
Tom’s main course was lobster, served in a fun, frothy sauce.  Mine was a beef tataki – really tasty and cleverly served in bite size chunks arranged on a sparkling platter.

We lingered for a long time after dinner, talking and laughing.  Finally, it was time to go.  We walked the Beckmans to the Charles Michels metro stop where the line 10 would take them back to that great place in the 6th.

Earlier in the day, we’d taken a long walk down to the Parc Saint Lambert.  After we exited the flowery park, we saw a new phenomenon on the rue Léon Séché.  The street has been closed off to cars, and a cobblestone surface has been added or restored.  Lining the little street are new wooden planters hosting a wild assortment of plants.

A bright green and gold sign erected by the City of Paris explains that this is now a vegetated street, “a street where one can garden, a more convivial street that creates social ties, a street that favors biodiversity, a street that refreshes the city in the summer.  Where to garden? In the pots and planters, on the border of the façade, at the foot of the trees.  Together, we vegetate Paris.”

So the neighbors are responsible for this wild assortment of plants.  Very interesting.

After soaking in this enjoyable change, we went on to the square in front of the stately town hall of the 15th arrondissement.  There Tom was pleased to discover a rising bollard.  Ever since he first encountered a sign in London announcing that one should “beware of rising bollards,” he’s been on the lookout for them – must be a male thing.

Tom wanted to see the Square Vergennes again, so I led the way through the Square Adolphe Chérioux to the rue Vaugirard.  We crossed the street and soon were out of the traffic noise, and into the serenity of this little lane that isn’t a square exactly, but rather more of an “L.”  At the crook of the L is the Musée Mendjisky, a place we’d like to see.  It will re-open after vacation on August 22.

Ever since we first discovered it, we thought a townhouse on the Square Vergennes would be an ideal place to live in Paris.  One of the townhouses there is the Hungarian embassy.  Little embassies are scattered amusingly about throughout neighborhoods in Paris.

Then we enjoyed a long stroll down the rue Vaugirard, passing by my favorite costume jewelry store, Pour, which is also closed for vacation until August 22.

We turned right on the rue de la Convention to head back toward home.  One block of that street is devoid of street-level retail, so it is a little boring.  But I noticed that one of the blockish buildings on that street is a Credit Cooperative, which I guess is like a credit union.  This financial institution has a number of posters displayed in glass windows on its walls, with interesting, humanitarian messages relating to money: 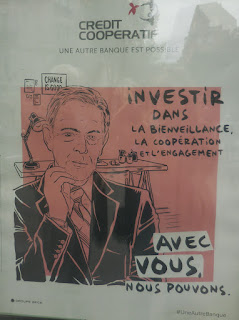 “Another bank is possible.”
“To invest in the benevolence, the cooperation, and the engagement.  With you, we can.”
“Cooperation for my region.  My savings finance the social economy and solidarity in our region.  It is there that my money is the most useful.  Together!”
“To choose where your money goes to act for changing the world.  With us, you can.”

Soon after that block was behind us, we passed the beautiful Accent Corse bistro, which is closed for vacation until the end of the month.  And then there was L’Argument, at number 121 rue de la Convention, the former home of Bistrot 121 where we enjoyed many reasonably priced, good dinners.  Bistrot 121 closed last year, and L’Argument opened.  We haven’t yet tried L’Argument, which appears to be a classic brasserie, with continuous service throughout the day.

As we passed by, one of the servers who had also worked at Bistrot 121 looked out and saw us.  He smiled and waved.  How could he possibly have such a good memory?

We turned right on the avenue Félix Faure.  We still had one more destination, on the way home;  Le Monde et Nous is my favorite boutique in Paris.  It features Italian-made women’s clothing, shoes and handbags.  It was time to replace the last handbag I bought there, so Tom and I stopped in.  I tried on a couple tops, but finally decided simply on a well-made black leather handbag.

With that purchase in hand, we strolled on past the St. John the Baptist of Grenelle church and up the rue du Commerce.  We stopped in the Thomas fromagerie to buy some more delicious Salers cheese and other necessities such as milk and butter from Brittany, and for Tom, another jar of the best strawberry preserves.

So there you have it.  Another 10,000 steps in Paris.  Come walk with us again tomorrow.

Posted by Barbara Joy Cooley at 4:14 AM