July 21, 2018 -- The sight of a building stopped me in my tracks this morning.  It made me forget how sore my feet were.  The street was narrow, so the building's elaborate façade was difficult to photograph.  Yet it begged to be photographed.  The building seemed to scream, "LOOK AT ME!" 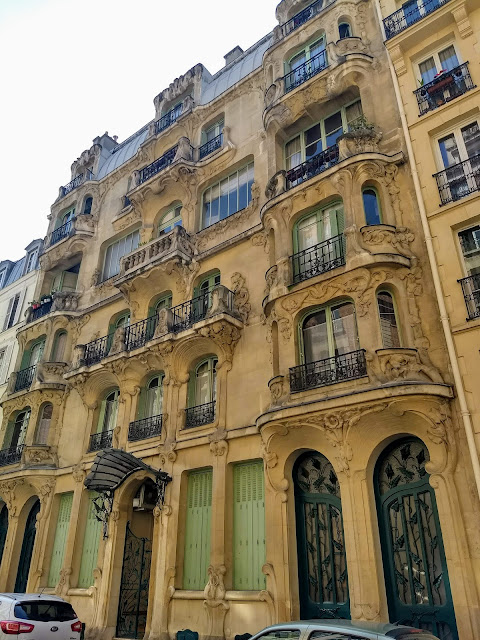 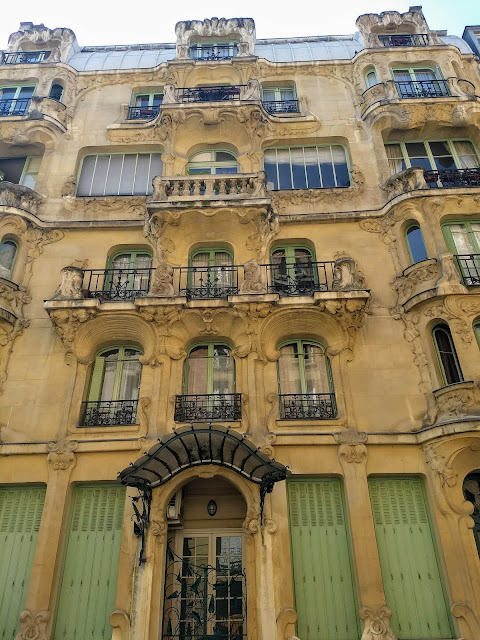 All elaborate Art Nouveau buildings scream like that.  This one was doing it well -- loud and clear!

Yet the architectural gem is neglected.  I hope that someone will come along and restore it, the way 29 Avenue Rapp, the famous Art Nouveau building designed by the architect Lavirotte is being restored. (Here's what I wrote about the Lavirotte building in 2012, and my 2015 photograph of it is on this page.)

Who would expect such a showpiece to be on the simple, narrow, unassuming rue du Champ de Mars -- a street that seems to be a humble shortcut connecting the market street, rue Cler, with the Avenue de la Bourdonnais, near the Champ de Mars?

I did some research and learned that the architect of this find at 33 rue du Champ de Mars was Octave Raquin.  He designed it as a private middle school for girls.  The 1904 building has a name:  Les Arums.  And according to the French Art Nouveau blogger Eli Paseos, this was the only building Octave Raquin designed in this style.  Eli says that Octave Raquin is relatively unknown in the realm of Art Nouveau architects.

What is an arum?  It is a calla lily, a popular Art Nouveau motif.  In the case of Les Arums, we see the lilies in the stone facade, the metal grillwork on the doors, and in the tile mosaic inside, according to Eli.  Because the building was originally designed as the Longuets' school for girls, the calla lily motif may have been selected because it symbolizes purity and innocence.

Eli (a woman) writes that "It seems that this is the same Octave Raquin whose portrait Toulouse-Latrec painted in 1901 and who participated in the 'Revue Blanche,' a literature and art review from 1889 to 1903."

As you probably know, Avenue Montaigne is where most of the top fashion design houses have their main boutiques.  Some of them are not boutique size -- they are huge.  The Dior house, in particular, occupies much real estate on this swishy street.

At the Grand Palais, I turned toward the Pont Alexandre III to head back to the apartment in the 15th.  I decided to zig-zag through the charming streets of the 7th arrondissement:  rue de l'Université, rue Jean Nicot, rue Saint Dominique, rue Cler, and then, voila, the rue du Champ de Mars where I made the Art Nouveau discovery of the day.

The night before, the three of us dined at an old favorite place, Stephane Martin on the rue des Entrepreneurs, and it did not disappoint.  We were surprised to see the Chef upstairs, in the dining room, out of the kitchen.  He is normally so shy!

But I guess he was training a new server/maitre d'hotel, so he had to be upstairs.

Chef Stephane knew our names and remembered that we'd been dining there for many years.  I said it was 18 years, and he said yes, the restaurant started there 19 years ago.

The dinner was very fine.  Tom and Dan had the specialty of the house, a slow roasted pork roast cooked in red cabbage, wine, and honey.  It is a large dish, meant to be shared by two.  I ordered the turbot, which was delicious.  It was accompanied by a fine mixture of vegetables cooked in butter.

The three of us shared an apple tart and cherry clafoutis for dessert.  We said our farewells to Chef Stephane, and assured him that Tom and I would be back soon.  Very soon.


Posted by Barbara Joy Cooley at 6:23 AM