Tonight, France might win the world cup in soccer.  To say that people in Paris are excited about the game is an understatement.  Many are crazed.  Most are at least passionate.  They're shopping like demons for party food and supplies.  I saw that with my own eyes at the street market under the tracks on the Boulevard de Grenelle and in the Monoprix grocery store this morning.

I walked the length of the Grenelle market, and then decided to walk back along the less crowded, but warm and sunny sidewalk on the north side of the boulevad.  That took me right past the headquarters for the French Football Federation at 87 Boulevard de Grenelle.

I wrote about this unique, 1942 building six years ago in this blog (http://bjoycooley.com/8-16-12.htm).  The style of the building is distinctive, and it was one of the very few built in Paris during the German occupation.

The building was originally the Centre Technique de l'Aluminium -- the Aluminum Technical Center.  I encourage you to follow that link if you'd like to read a story about aluminum and a French-American controversy.

Now the building has been renovated and is the headquarters for the French Football Federation.  A couple of people, like me, stopped to photograph the structure on this most important soccer day in France.  A photograph of the team has been screened onto the glass façade.

While I was photographing, I could hear people a block away, shouting Allez les bleus!  People were running in the street waving French flags.  People have French flags painted on their faces.  The illegal vendors of Eiffel Tower trinkets (who are predominantly illegal immigrants) are now selling French flags.

The game starts at 5pm.  We three Cooleys plan a picnic supper in the apartment, at the dining table, with the game on the TV.  Then I'm sure Dan will go out and join the celebrating masses after the game.  The giant screens used on the Champ de Mars for the concert/fireworks/lightshow last night will display the soccer game this evening.

Yesterday evening, Tom and I walked for an hour or more in the city summer heat.  The heat was dry, and the air quality was mediocre, not bad.  We walked slowly.  We stopped to sit in a few different parks.  Our favorite was Parc St. Lambert because of the many families with kids playing there.  The atmosphere was festive, and safe. 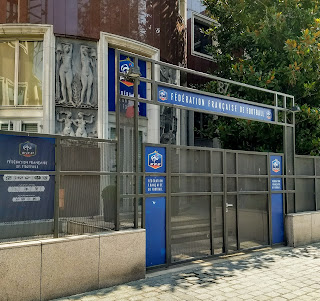 After a casual dinner, we watched and listened to the grand classical Concert de Paris (click here for concert video -- 2 hours long) and fireworks show (click here for video -- 27 minutes long.  Tom and I watched on TV, and Dan walked up to the Champ de Mars where he stood shoulder-to-shoulder with others.  He actually only made it to the front of the École Militaire; the Champ itself was completely full.

Tomorrow Dan leaves for a 5-day adventure in Amsterdam.  Then he'll return to Paris for another week, with a stay in an AirBnB studio on Montmartre.

Meanwhile, Tom and I remain at work on our writing and editing projects.  But work isn't too hard when you can do it in Paris.

Posted by Barbara Joy Cooley at 5:02 AM