As I crossed the Champ de Mars, I noticed that all the structures for the equestrian event (Longines) are now gone.  The park is almost ready for tomorrow's Bastille Day concert, light show, and fireworks like you've never seen.

I hadn't been on the Avenue Rapp yet this summer, so I selected that route from the Champ to the river.  Along the way, I noticed more and more Velib stations with bicycles in them.  Velib is slowly being resurrected!

When I was almost at the end of the avenue by the river, I paused across the street from the relatively new Russian Orthodox Church to photograph the morning sun upon its shining domes.

The walkway along the riverbank was uncrowded and clean.  The occasional runner or jogger passed me.  A few people were walking to work.  And there were four tall soldiers in camouflage uniforms carrying automatic rifles.   Security.

The walkway on the riverbank has many amenities.  I stopped to use the ladies' restroom but observed, after I opened the door, that the doorknob on the inside had been removed.  I would have been trapped if I'd gone in and let the door shut behind me.  Thank goodness I'm observant.

So I just used the handicapped restroom instead.

The views along the Seine riverbank are extensive, and the steep angle of morning light illuminated the scene in a way I'd never seen before.  The archipelago barges were not open.  The gangways to them are lowered at 10AM.  Morning Seine walkers know this.  Now I know it.

Sections of the blacktop had been painted the colors of the rainbow.  In other places, swirly, colorful designs decorated the dull surface.

As I walked, I grew thirsty.  I saw one of the City of Paris water dispensers.  For those who have their own water bottle, these dispensers offer a choice of flat water on one side, and sparkling water on the other.  I pulled my empty bottle from my bag and selected the sparkling water.  Mmmm.  Nice and cold it was.

Off to the side, where weeds and wildflowers are allowed to grow at will, I saw a man harvesting herbs and greens.  He'll have a nice salad today.

When I reached the pedestrian bridge at Solferino, I climbed its center steps and began to cross the river.  I stopped to look at the view in the middle, and noticed the plague of love locks there.  Oh, how I wish people would stop defacing Paris in this way!

At last, at the Tuileries, I noticed the grand park's terrain was sharply divided between brilliant sun and deep shade.  Contrasts!

The ubiquitous green metal chairs, which would all be occupied this afternoon, were mostly empty.  I paused to sit in several as I wandered through the Tuileries this morning.

As I sat in one by the big pond with a fountain in the middle, in the midst of the sculpture garden, I heard a distant crowd roaring and cheering.  The sound came from the area around the Musée D'Orsay, across the river.  I imagined a bunch of French soccer fans having a pep rally in that outdoor space on the west side of the museum.

France plays against Croatia in the final game of the World Cup, on Sunday.   We three Cooleys plan to watch at least part of the game.

When I almost reached the crowd of people lined up to enter the Louvre at the I. M. Pei pyramid, I turned around to begin the trek home.

Off to the right, I veered to admire a beautiful statue called Méditeranée (1905), by Aristide Maillol.

Walking straight down the middle of the Tuileries, Louvre palace behind me and the Place de la Concorde's ancient Luxor Obelisk in front of me, I felt like a queen.  No, an Empress.  In Chico's T-shirt and jeans?  I do have an imagination.

So when I turned at the Place de la Concorde, I wished to cross the Seine on the Pont Alexandre III rather than the plainer Pont de la Concorde.  Naturally, I walked along the Cours de la Reine (Queen's Way) to reach the preferred bridge, with its fabulous golden statues against the French blue sky.

The way home from there was simple -- the Esplanade des Invalides, a little knot of streets in the 7th arrondissement, then the Avenue de la Motte Picquet and the Rue du Commerce to home.  Sweet home, where I could finally break my 12 hour fast by having some vegetable juice and café au lait.

Enjoy more of today's photos, below.  You can get a better look at any photo by double-clicking on it. 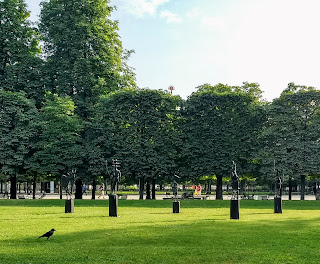 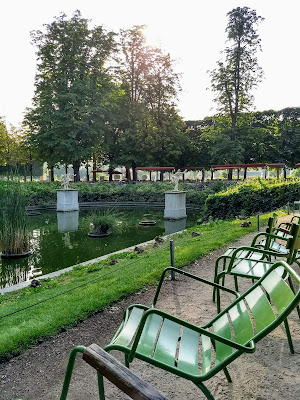 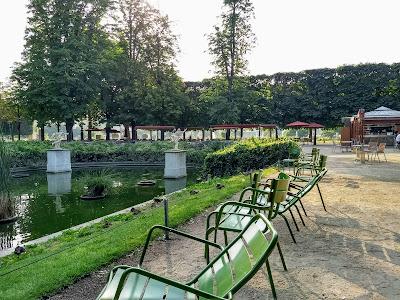 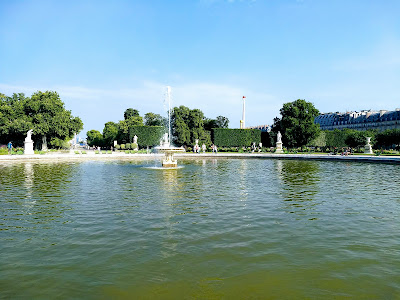 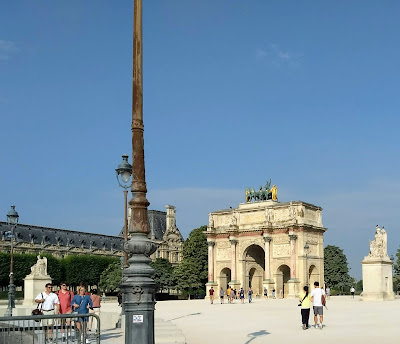 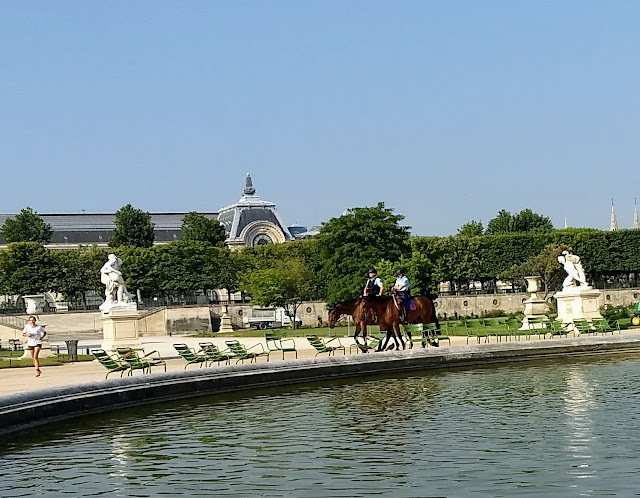 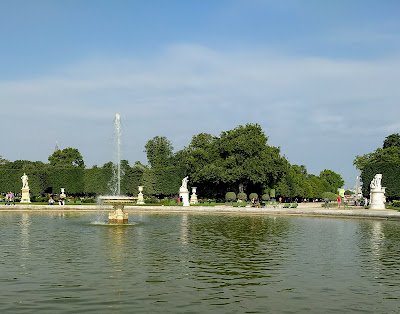 Posted by Barbara Joy Cooley at 5:54 AM